So what are you up to at the moment? I bet you’re bored silly (if you’re not feeling absolutely rotten). We’re just a couple of days into the UK lockdown and I’m already tired of watching TV, having all my upcoming copywriting projects ‘postponed’ (code for cancelled) and, perhaps worst of all, ‘home schooling’ the kids.

As my children are rapidly discovering, there’s only one thing I can teach – the value of a solid forward defensive shot. Geography? Sorry son, I only know the location of cricket grounds. Maths? I can do run rates but that’s where it ends. French? I know the rules of French cricket but I’m not sure that counts. Therefore I’ve let Mum take over for the time being.

Fortunately shirking my educational responsibilities has freed me up to focus on the following England cult hero cricketers XI. Therefore, I kindly ask you to put your shoes on and take a trip down memory lane with me. It might be the only time you leave the house today.

Any XI of cult hero cricketers has to begin with Banger. He was a much loved entertainer whose modus operandi generally involved ‘standing tall and giving it a whack’. It worked. He scored just shy of 6,000 Test runs at a healthy average of 44 in 76 Tests. That works out at 77 runs per Test – exactly the same as Alastair Cook but in an era when the bowling was slightly stronger.

We can only imagine what Tresco would’ve achieved for England had he not been sawn off in his prime by that stress related illness. It was such a shame.

Crowds loved Marcus because he played a bit like a club cricketer – he relied on a hand-eye coordination rather than perfect footwork. He also had the physique of an ordinary bloke (something I’m sure many of us can relate to).

I personally loved Trescothick because of his approach. He was always proactive and took the attack to the opposition. His quickfire 90 off 102 balls at Edgbaston in the 2005 Ashes set the tone for England’s comeback after the disaster at Lord’s. It showed that England wouldn’t be bullied.

As a lazy old sod who’s a bit of an individual, I’ve always had enormous respect for workaholics who are absolutely and wholeheartedly (almost obsessively) dedicated to the cause. This was Alec in a nutshell. Playing for England meant absolutely everything to him and it showed.

Although he couldn’t play spin for toffee, I think Sir Alec was arguably the best player of quality pace bowling that England have had in recent times. He embraced opening, loved the extra pace on the hard new ball, and timed the pants off it.

I loved Stewart because, a bit like his opening partner here, he would never cower in the face of hostility. The quicker the bowling, the quicker it would disappear to the boundary. His twin tons in Barbados summed it up for me. Curtly Ambrose was pissed but Alec didn’t care. He just kept picking him off.

Stewart was good enough to average 52 against Waqar and Wasim, 37 against Ambrose and Walsh, and just shy of 40 against Donald and Pollock. The only flaw in his resume was his mediocre record against Australia – largely because his exquisite pulls and peachy back foot drives didn’t really work against Warne’s leg-spin.

Another fearless batsman who took on the pacemen, The Judge was courageous, aggressive, and always worth watching. He also possessed the best square cut I’ve ever seen.

Smith quickly became the man us supporters looked to when England were under pressure. Rather than being intimidated by the pacemen, Robin actually seemed to relish chin music – so much so, in fact, that he rarely even bothered wearing a grill on his helmet. This alone qualifies him as one of my favourite cult hero cricketers.

With massive forearms that made Roberto Carlos’s thighs look like drumsticks, Smith was clearly England’s alpha male during the 1990s. He was a complex character behind the scenes but on the field he made it look so simple – except when the spinners were bowling, of course.

David Lloyd once called him ‘surly’. I call him bloody brilliant. And that’s why he joins my list of cult hero cricketers here.

In my opinion Thorpe was the best batsman England of the last 30 years. He was more reliable than Pietersen, more versatile than Root, more talented than Cook, and had no discernible weaknesses in either his technique or temperament.

Thorpe was a brilliant player of spin and also fantastic player of pace. He was a thinking cricketer, a brave cricketer, and his only lean spell in an England shirt came when he was suffering from a back condition. Otherwise his resume is flawless.

Like Marcus Trescothick, it’s amazing to think what Graham might have achieved without those mental demons. His autobiography is one of the most fascinating (if a tad sobering) cricket books I’ve read.

Good old Brigadier Block. Collingwood was always England’s man for a crisis. If the chips were down, and several wickets were also down, then Colly was the man most likely to bail us out.

The Durham stalwart saved numerous games for England when a draw looked about as likely as any cricket being played this summer. However, I think the supporters loved him so much because he maximised every ounce of talent he had. We can’t get enough of triers who give everything.

I sense we often prefer honest pros like Colly to uber-talented megastars who frustrate and occasionally disappoint because they could / should have achieved even more. It’s interesting to compare Collingwood with Pietersen. They were the perfect foil for each other in many ways but which player was more popular with supporters?

Freddie ticked all the boxes cult hero cricketers tick: he was capable of brilliance but also highly relatable and eminently human.

Like the aforementioned Trescothick, our Fred was a bit like a club cricketer too. He was a tad overweight at the start of his career and seemed to play like a club cricketer at times: he smiled a lot, gave it a whack, and enjoyed every moment. In fact, he was more Botham-esque than any other ‘the next Botham’ we’ve ever had.

Flintoff obviously evolved as a cricketer over time. He always loved the big stage but his bowling improved, his batting fell away, he lost the weight, and ultimately became the finely tuned athlete you’d expect an England cricketer to be.

However, the rigours of the international circuit came at a cost to both his physical and mental health. He just didn’t seem to enjoy the game as much. This was a massive shame as he really could’ve achieved more.

Freddie was also the very first TFT interview I did. He was a really good bloke.

Russell’s batting looked like a dog’s breakfast. But it worked. His keeping was also immaculate despite his somewhat idiosyncratic style.

They don’t make ’em like Jack anymore. In fact, it seems a tad bizarre that such an eccentric chap was a top international sportsman not so long ago. Today’s players almost seem dull and corporate by comparison.

Jack is included in this cult hero cricketers XI because he’s the best keeper I’ve seen in an England shirt (sadly I didn’t get to see Bob Taylor) and life was rarely dull when he was playing. He also wound the opposition up something chronic.

Supporters tend to love players who add colour to proceedings. Being a brilliant artist, Jack knows a thing or two about that.

‘Daffy’ was a legend. A more than useful bowler, a superb athlete, and an entertaining batsman. He was like Chris Lewis. But good.

We’ve included quite a few agricultural cricketers with a hint of the amateur about them above so picking DeFreitas, who was as smooth and stylish as the pink panther, provides a nice contrast.

There were times when Daffy seemed to carry the whole attack on his shoulders during the 1990s. He was supremely talented and I bet he would’ve excelled at any sport.

I almost omitted Goughie here because we’ve talked about him a lot recently – it’s why I left out Gower by the way – but in the end I just couldn’t resist. After all, Gough was probably England’s most popular cricketer for nearly a decade.

Dazzler had so many qualities I could describe here – boundless enthusiasm, determination, and energy amongst them – however I don’t think these are necessarily the qualities that made him such a cult hero. After all, plenty of cricketers give everything.

I think Goughie was loved so much because he was exactly what England needed at the time. We’d grown tired of tall medium-fast pie chuckers. And we’d grown very tired of having our behinds handed to us on a plate by the Aussies (and everyone else for that matter).

Gough was a bit undersized but made up for it through aggression and a fast arm. He really stuck it to the opposition – thus providing us with someone who could give a bit back. Darren perfectly encapsulated our underdog spirit of the 1990s. 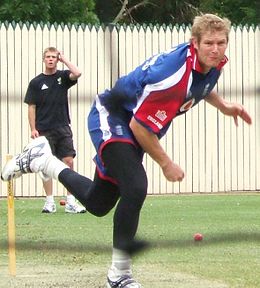 How many cult hero cricketers have a dog named after them – not least a famous commentator’s dog?

We all loved Hoggy. He seemed like an ordinary bloke doing what he loved most. And we all loved watching his journey from likely lad to England mainstay.

Although he started out as a bit of a tearaway (people forget that he was quite brisk when he first burst on the scene) he eventually found his rhythm as a top class medium-fast seamer.

People claimed that Hoggard needed the ball to swing to be successful but this simply wasn’t the case – his 7-109 in Adelaide on a flat deck and his 7-61 at Johannesburg (he took 12 in what was a high scoring game) prove it. He was a very skilful bowler.

Hoggy had all the hallmarks of a crowd favourite – a gutsy cricketer with signature hair and no hint of pretence.

I’ve been reading Monty’s autobiography in recent weeks and I can confirm that he’s as daft as a brush – despite being a pretty high academic achiever. When David Graveney called to inform him that he’d been picked for England for the first time, dear Monty didn’t even know who Graveney was! Incredible really.

I think we all loved watching Monty because he was like a child living his dream. He could also bowl. Boy could he bowl. At his best he was incredibly accurate and gave it a tremendous rip with those long extra-terrestrial fingers.

Although there was some truth in Shane Warne’s observation that Monty played the same Test every time, he brought enormous joy to crowds everywhere he went. The supporters loved him because he was so human. He never even attempted to hide his emotions and his fallibility (especially in the field) made him seem real.

So there you have it folks – a TFT cult hero cricketers XI. Who have I missed out? Who were your favourites? Joining the debate below has got to be more interesting that watching the lockdown paint dry.