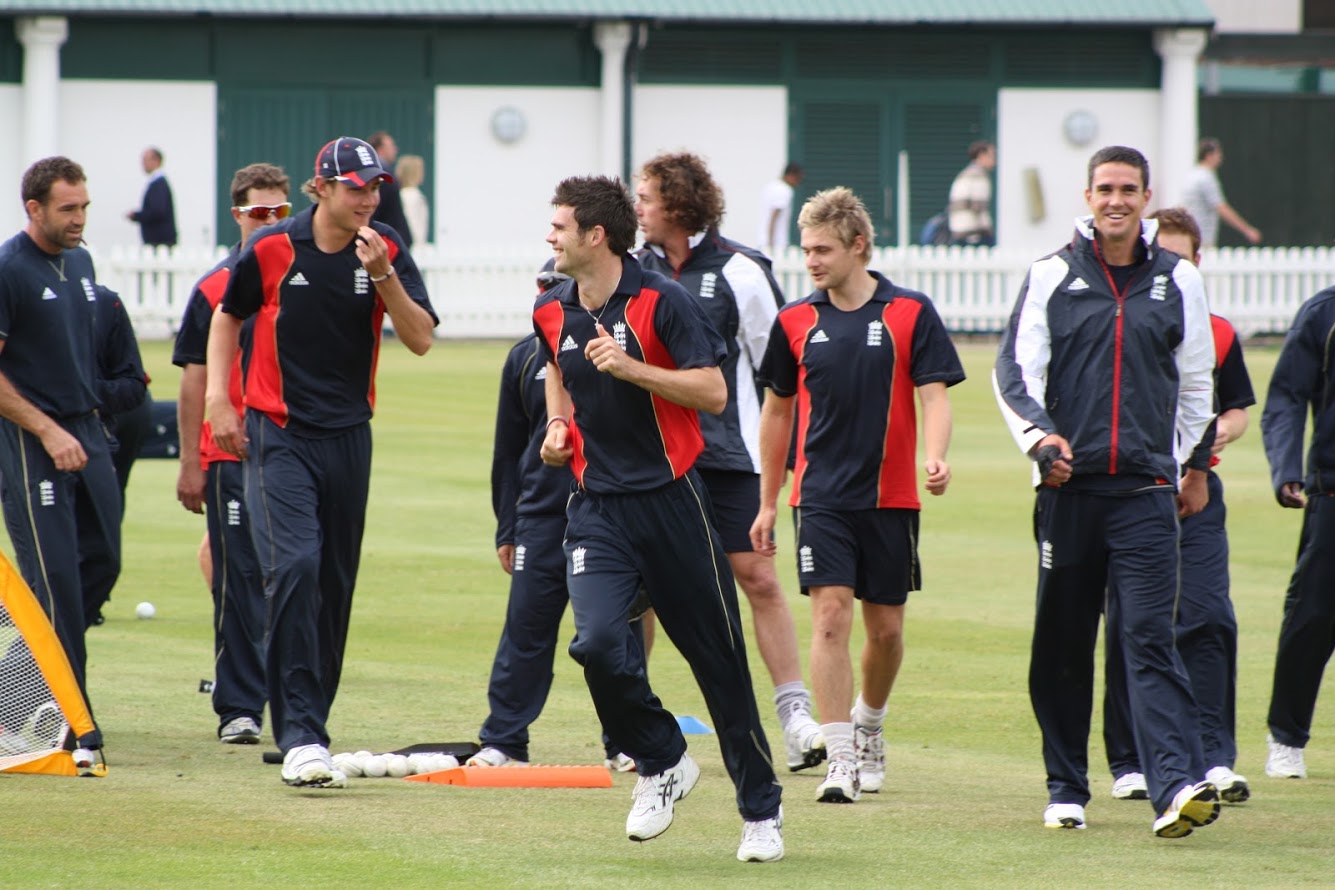 What an incredible day in Rawalpindi. For England to score 506 in just 75 overs was extraordinary. Was it the pitch, which looked flatter than the M1, or just the way that Test cricket is going now? England’s run rate was T20-esque all day, which brings us nicely onto today’s article by Sam Tomkinson. He reminisces about the day that a seemingly innocuous over by England’s new selector, Luke Wright, put England on course to win their first T20 World Cup. We’ll analyse the Test match when both teams have batted.

There are overs that stay in the mind of us cricket anoraks. It is not just the raw figures, it is how they change the flow of the game. Momentum is such a crucial part of sport and it is in these six, legal, deliveries that a game is won or lost. I do not remember nostalgically the Chaminda Vaas hat-trick in the 2003 World Cup; three wickets in the first three balls of a match is an astonishing feat. But, I remember the Shaun Tait thunderbolts at the top of the innings vs Pakistan in 2010. Watch this on your streaming website of choice; it might have been the fastest over of all time.

Yes, cricket is a statistical game, numbers are the most important facet, of course, but impressive cold hard stats do not hit our emotional feelings to the game. We live for moments of emotion; we live for game changing actions, that Flintoff over versus Langer and Ponting. We love those moments that crescendo into a realisation that “we can win this”. Mitchell Johnson strides to the crease, the Barmy Army are in full voice, Mark Taylor on commentary says, “England are going in for the kill here”, Chris Tremlett bowls a full in-swinger and Johnson is out first ball. That is when I knew England had won the Ashes down under.

This England “getting one over” Australia rhetoric, very infrequent granted, brings me to the point of this article: Luke Wright 1-0-5-1. Innocuous, so very innocuous are those figures in isolation that one would, and quite rightly, question my sanity.

What makes cricket the brilliant sport it is, is the storyline behind the action. This is the T20 World Cup final. This is England versus Australia. This is a star-studded Australia side, boasting the attack of the tournament: Johnson, Tait and Nannes with the leading wicket taker in Steve Smith their spin option. Yes you saw that, Steve Smith the leading wicket taker. So deep and powerful was this Australia side that Smith was batting down at number 8.

England, on the other hand, should have been eliminated in the group stage, had the Guyanan rainy season robbed Ireland of a historic victory. However, the three lions were building momentum, thanks to the revitalised Ryan Sidebottom with the new ball, canny change ups from Messrs Bresnan and Broad, with the spin twins Yardy and Swann proving mightily effective on the slow, turning wickets of the Caribbean. Plus Kevin Pietersen was having the tournament of a lifetime. Still, Australia were favourites.

Luke Wright was the poster boy for the T20 generation, as his swashbuckling top order batting had seen him establish Sussex as a competitive domestic T20 side. At this stage, he was not the Melbourne Star who Kevin Pietersen vouched for over James Vince before the 2014 World Cup. Nor was he certain of his place in the side – arguably Bopara was the better fit, offered a little more with the ball, and was more established as a batter in the lower order hitting role. Luke Wright had endured a quiet tournament, bar an important partnership with Eoin Morgan in the Super 8s. Had Bopara made an impact when Pietersen flew home for the birth of his child, Wright would have been jettisoned from the side on KP’s return.

It is game day at Kensington Oval, England have won the toss and decided to field. The idea behind this is perhaps wanting to stay in the game as long as possible, and not be blown away in the Powerplay. 2.1 overs in and Australia are three down with only eight on the board. Sidebottom was doing Sidebottom things, picking up two early wickets with the angled delivery, and the usual epitome of confidence, Michael Clarke, was nervous and frenetic. England on top, but you can never count out Australia, especially in white ball global tournaments. David Hussey was still scratching around, but the spectre of his more established brother looming, and the imposing figure of Cameron White starting to tick, the most partisan English fan still had shivers down their spine.

White had established himself as a big name on the blossoming T20 circuit. He was so revered that Royal Challengers Bangalore had paid Somerset tens of thousands to allow him to play for them in the arbitrary T20 Champions League. At the start of the 16th over, White was 29* off 17 deliveries. Yardy, who had been so dependable all competition, had been smoked in his previous over and was going at north of 11 an over. Where does Collingwood turn to now? Does he bowl himself? Medium to slow dobblers were likely to go the distance.

Instead, the skipper turned to the blonde streaked Wright – showing him the same level of faith that the England selectors of today show Zak Crawley – and asked him to cover Yardy’s set.

Bowling at just over 80 mph, Wright bowled back of a length at the stumps, hoping to burgle his way out of this over with minimal damage. Singles are gold dust. Anything below double figures from this over is a win. The first three balls, Wright sticks to the script. He bowls them into the turf and the belligerent Aussie stroke-makers can only slash three singles. Now is the moment of destiny.

In cricket, our sixth sense kicks in when the defining moment of a match arrives – often when a side needs to up the ante or a player has become bogged down. A couple of quiet balls often lead to a batter asserting themselves. This was the time. Wright knew this; White knew this; and I suspect everyone in the crowd knew this.

A puff of the cheeks and Wright strides in to the crease. White, having seen the length of his previous deliveries, naturally moves his weight onto the back foot and expects this to be back of a length and straight; so he gets in perfect position to swot the ball over cow corner. Another big blow would’ve continued the Ozzie momentum and inevitably pushed their total over 160. And from there, another World Cup victory.

But in this butterfly moment, something different happens…

Whether he had seen White move early, only the bowler knows. However, the Sussex all rounder went against the grain. Wright goes full, with a hint of away movement taking the ball wide of off stump. White, off balanced, head leaning towards mid on, continues with the slog to the leg side. As all cricketers know, balance at the crease is critical, and with this all awry, the Queenslander slices the ball into the Bajan skies.

The offside fielders circle towards the ball. Three of them, almost causing injury as they desperately scramble to reach the pill. Having experienced a similar scenario in the previous over, lightning seemed to be striking twice. It was the same fielder who found himself covering acres of space with the wind swirling and the World Cup on the line. It was an amazing take from Stuart Broad. And that was the end of White, and with it the end of Australian hopes.

The camera pans to Wright, and in his face you see a sense of relief, rather than exaltation. You almost get the feeling that he is happier with it being a dot ball than an actual wicket. Or perhaps it is the shock that he has taken such a crucial wicket? Let’s go with the latter.

Some may argue that, with Michael Hussey coming in next, scoring 17 off 10, this wicket would not have made a difference. To those naysayers I implore them to look at the context of those six balls. Wright could have, perhaps should have, been hit for 12 or more runs in that over. This would’ve meant two set batsman at the crease and 7 more runs on the scoreboard. A cameo from Mr Cricket, along with White potentially taking his strike rate to the dizzy heights of 200+ and England would’ve been staring down the barrel of 170+. Therefore, in my opinion, it was this momentum-breaking over that won England the T20 World Cup in 2010.

Luke Wright may never have enjoyed the distinguished white ball international career that his early years, and his renaissance in his mid-thirties, promised. But those six balls, in my eyes, put him in the pantheon of English white ball heroes.

With those six balls, Luke Wright became a deity for one small pocket of time in the annals of cricket history.