Mike Atherton Johannesburg 1995. These words bring back so many memories. New writer Matthew Sheldon was moving house when he rediscovered approximately ten hours of footage of the game on VHS. He dutifully watched it back and was inspired to write this piece. What an innings. What an opener. Athers, you absolute legend …

Clive Eksteen is 52 years old. In 1995 he bowled 52 overs in a test match nobody who saw it will ever forget.

Johannesburg 1995 encapsulated perfectly the woeful state of English cricket teams of the 90’s in a most enthralling test match.

It all began in such formulaic fashion…

England won the toss and chose to field. The English bowlers toiled with mixed fortune on a wicket more suited to the hostility of Donald than the nagging military medium of Fraser.

On the batting side Ramprakash failed twice as usual – and he didn’t even bother to flatter to deceive. Hick failed twice despite a brilliant hundred in the previous test. Inconsistent service resumed.

Over 3 and a half days the inevitable unfolded. England were not really a team at this point in their history but a collective of artizans sporadically saving matches or gracefully defying conditions when their individual muse took them.

Then so to the 4th innings in Johannesburg. England required 479 to win. More likely there are almost 2 days to survive. Was that laughter in the Sky studio? 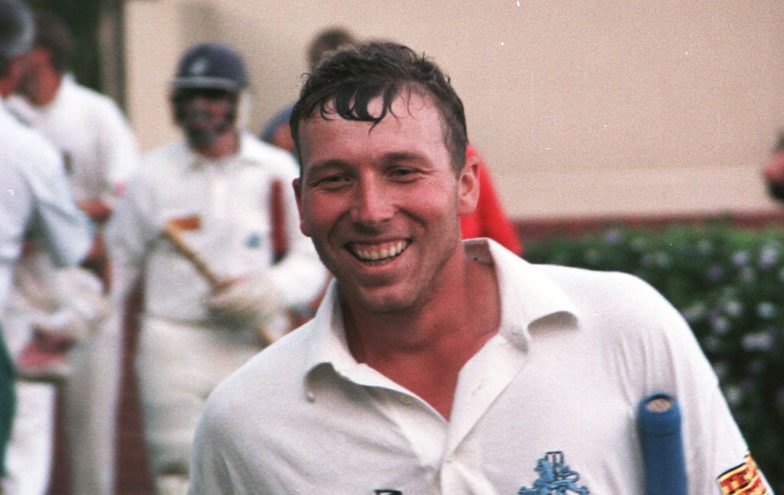 Michael Atherton and Alec Stewart took the reigns. Stewart played his part well in this test, but partners came and went for Athers until Graeme Thorpe cottoned on to the fact that there was actually something to play for other than pride. Thorpe eventually succumbed but our hero Atherton stayed compact, watchful, resolute.

Atherton may not have been a swashbuckler, he may not have been the most expansive, and to be perfectly honest he looked unkempt at times. He wasn’t a great captain – remember Hick on 99 and the declaration? But…his stickability was unquestionable. At times he was impossible to remove.

In these trying times supporters knew that if Michael Atherton departed the crease – so did England’s chances.

By that I don’t necessarily mean to win or to draw. In many cases Atherton’s presence could simply reduce our embarrassment. At that time avoiding humiliation was enough. Our expectations were so low.

You knew all hope was gone if Athers failed. One out – all out.

As time went by during that 4th innings Atherton remained unmoved. Donald sent down rockets, McMillan the same, Pollock chipped away at that length Glenn McGrath would come to utilise to such devastating effect (notably against our hero.) The aforementioned Eksteen found his rhythm (let’s face it he had the time) and Athers remained steadfast. He remained unshakeable. He remained.

Atherton was in no mood to be prized from the crease. He stuck to the wicket like juicy fruit on your Converse (90’s reference.) He only played deliveries he absolutely had to.

Let it also be known that this innings wasn’t simply one of attrition, he played some beautiful shots during these 492 balls faced – I recall one pull in front of square that was exquisite and brought the South African pace attack to their knees – by now they were running on fumes.

Minutes became hours became sessions became days. New balls arrived and the shine stayed on for almost 80 overs as our hero was entrenched.

Jack Russell joined his captain and determinedly held up the other end. He too was bivouacked down for the rest of the proceedings. In his own idiosyncratic style he shuffled to an unlikely 29 – with a strike rate of 12!

I found VHS copies of this innings when moving house earlier this year. I must have wanted to keep this with me as an example of determination and willingness to succeed. Of pure bloody mindedness. Of Test match cricket from another age.

On the horizon after 10 and a half hours was that most beautiful of Test match results. One that people who don’t know the game are perplexed by. We battled like warriors for two and a half days for a sumptuous draw! A draw!

‘Yeeeees! It’s nil nil in the series, get in’, we all rejoiced. ‘What a beautiful draw.’

Atherton since described coming in and out of a zone for every delivery. In order to do that over the course of such a marathon innings he only really concentrated fully for about 20 minutes. I on the other hand felt like I’d aged 20 years.