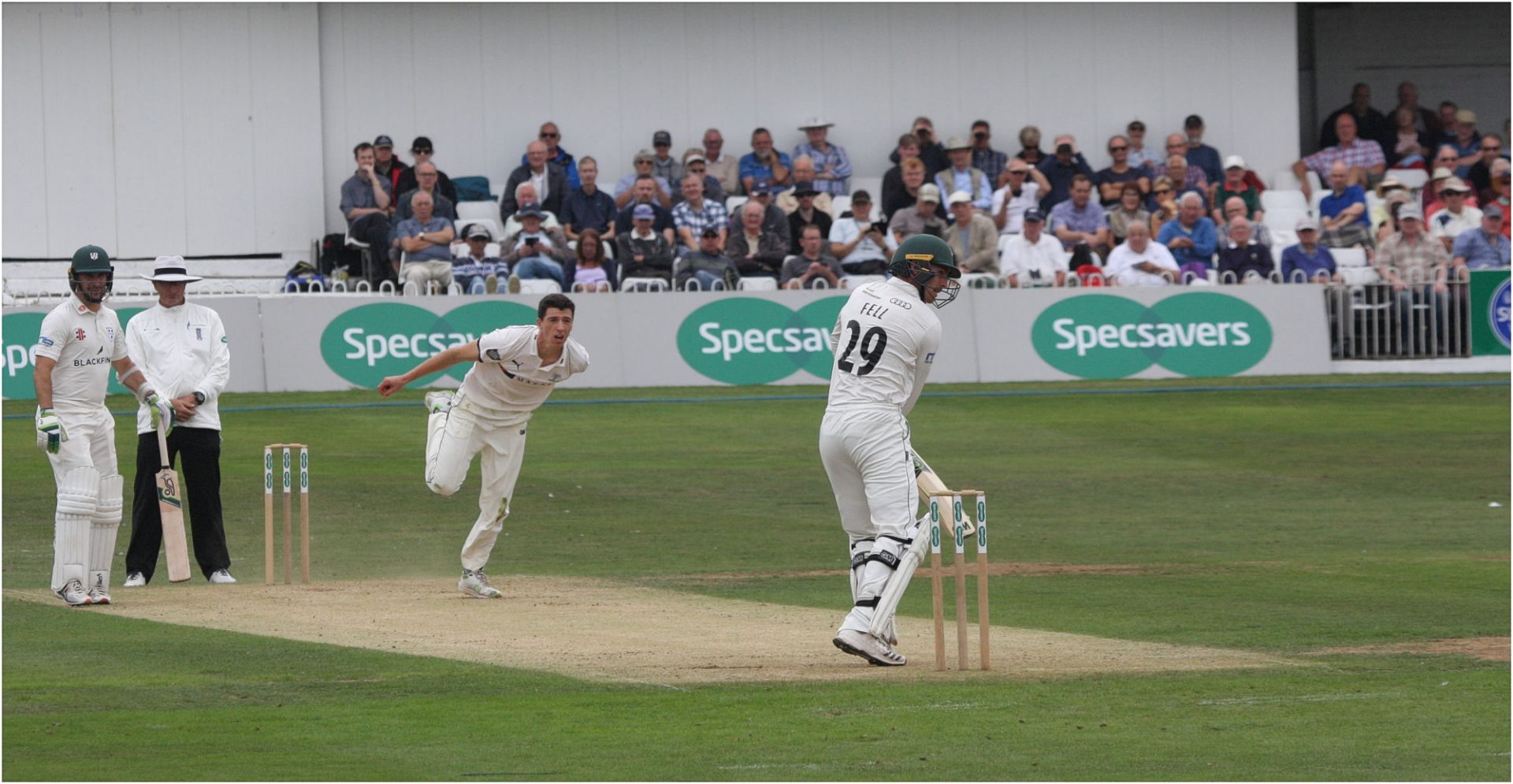 Today we welcome Dave Morton back to TFT. He poses and existential question about bowlers and the role they play …

Many years ago, when I was a pre-teen, my parents upped sticks from our native Yorkshire to a Midlands town called Burton upon Trent. My tears and tantrums were roughly ignored, but there were benefits, it turned out. One early one was that I actually met Wilfred Rhodes, probably the greatest all-round cricketer the world had ever seen. (Garfield Sobers was then a teenager, a few years older than me, and not yet what he would become.)

The fabled Wilfred was an old, old man, totally blind now in 1956 or thereabouts, and living in Burton with his daughter and son-in law. Later, they moved to Bournemouth. He spoke kindly to the very nervous and awestruck little boy.

By an odd coincidence, an England teammate of Rhodes lived not too far away from us, in Stoke-on-Trent. They were friends, and I had seen them together, at Scarborough, where the crowd always applauded as they took their seats in the pavilion. A few years after my encounter with Rhodes, SF Barnes was interviewed on our local TV News. Looking at dates, and guessing, perhaps it was his 90th birthday, in 1963.

“Mr Barnes,” said the extremely posh interviewer, “it has been said that you were the greatest bowler of all time. Do you agree with this assessment?”

Barnes, old but still tall and imposing, pondered, took his time. Eventually, “Yes, I think I was.”

Brilliant! But what sort of bowler was Barnes? Or perhaps he was just ‘a bowler’, a professional cricketer who would bowl fast or slow, seam or swing, offspin or legspin, as the pitch or situation demanded? His Wikipedia entry suggests this is the case, a young man who initially bowled fast, then added all the other skills. Almost all. “It’s true I never bowled a googly,” he said. “I never needed to.”

His figures speak for themselves. He was reputed to be a difficult man for amateur captains to handle, a proud and independent pro who knew his own cash worth and refused to bend the knee to his social ‘betters’. “You bowl them in,” he said to one England captain, who had decided to use the new ball himself, “and then I’ll bowl them out.”

There’s another legendary name from a few years earlier still, George Lohmann of Surrey, who seems to have been similar in style, and even greater in statistical success, but minus the memorable soundbites and naked antagonism of his Staffordshire counterpart. Quickish spin seems to have been the way to go on the pitches of the time.

Time passed, and pitches changed. Fashions changed too, in cricket as in life. Bowlers more and more limited themselves to a narrower range of skills, and teams picked an attack appropriate to the conditions, or a ‘balanced’ attack, for all conditions. Sometimes they got it wrong. In Ahmedabad in 2021, England selected a seam-heavy attack on a pitch that turned out to be a raging turner, almost from the start.

Short of a complement of specialist spinners, captain Root called upon his own skills, and he didn’t do too badly, taking five for eight in the first innings! However, England lost and had, in effect, played against India with a nine-man team, as two of the specialist bowlers had no role.

Why did it have to be a batsman who filled in? Surely a bowler, a Test-class bowler, should be able to send down passable spin? Even quick spin, given that these are big men, with big hands. They are accustomed to using the cutter as a slow-ball variation in white-ball cricket. They all do it, so they must practise it. As a supporter, I just don’t get why this wasn’t tried in the match.

Back in 1961, at Headingley against Australia, England found themselves on a pitch where the groundsman’s preparation had gone wrong. The man to step up was Fred Trueman. Fiercely proud of his pace, he had taken five for 58 bowling conventionally in the first innings. With Australia 99 for two in the second innings, and threatening to get on top, Fred cut his speed to bowl off-cutters, which gripped on the crumbling surface. They were all out for 120, he took six for 30, and England won by eight wickets. Trueman did something similar at Edgbaston two years later, and again England won, against Worrell’s West Indies team.

Other bowlers have regularly bowled in more than one style. The best, and most famous, was undoubtedly Garry Sobers. He began as a teenage orthodox left-arm spinner, and was selected in this role against Hutton’s England in 1953/54. Gradually, he added to his repertoire, and in his prime he was capable of bowling genuinely fast, or fast-medium swing, or wrist-spin, all to a high standard. He also just happened to be the best batsman in the world, the captain of the best team in the world, a great fieldsman anywhere, and everyone liked him! “Aye, he were useful, were Garry,” as Wilfred Rhodes might have said. (He actually did say that about Victor Trumper.)

Tony Greig bowled a mixture of medium pace and quick off-spin for Sussex and England, and Mike Watkinson performed a similar role at Lancashire. Before that, there was a big lad at Gloucestershire, who failed to make it as a quick bowler. Tom Goddard joined the County Club as a young man in 1922 but, in six years, he did little and was not retained. He joined the MCC ground staff at Lord’s in 1928 where he reinvented himself as an off-spinner, and he returned to Gloucestershire the following summer. By the time he retired in 1952 he had taken 2,979 first-class wickets, including a few for England.

Goddard changed from one form of attack to another, and Ashley Giles followed a similar route many years later. I read that Axar Patel was also a quick bowler well into his teens. Others retain multi-skills. I saw Bob Appleyard open the bowler for Yorkshire, expertly using the new ball, before switching to off-spin with the older one. He was another who bowled it quickly, another who would have loved the Ahmedabad pitch. His County and England colleague Johnny Wardle could bowl either type of left-arm spin. Yorkshire discouraged the fancy over-the-wrist stuff, but Wardle destroyed South Africa to win an away series under Peter May. Shortly afterwards he was sacked by Yorkshire, but took a stack of league wickets with new-ball swing and then wristy spin, once the shine had gone.

I am sure there were many others, but I will finish with Liam Livingstone, who seems equally happy bowling either leg-breaks or off-breaks. Perhaps it’s easier for him whose day job, his main role, is as a batsman. But I am still surprised that more bowlers don’t ‘upskill’ themselves (horrible word) by learning an additional technique. If they succeed, it must enhance their chance of selection. Do they have anything to lose by trying?

Perhaps they do. One day, on holiday, I found myself playing golf with a bunch of lads. One seemed to know what he was doing, and I asked him how it was that he could put the ball down the fairway, when I couldn’t.

“Let’s see you drive one,” he said, and then “Oh, bloody hell, a cricketer!” as the thing faded out of bounds over extra cover. He got me to change my bottom-hand grip to something that felt as uncomfortable as wearing your shoes on the wrong feet, but it worked, sort of. I think that was the last round of golf I ever played.

Therefore, I can imagine that it might be dangerous to tinker with techniques, especially for a professional, but there have been batsmen who were high-class golfers, Dexter and Graveney come to mind, and modern players still like a round on their days off. It doesn’t seem to spill over into their batting.

Surely, it should be possible for a fast bowler to try a few off-breaks in the nets without irrevocably compromising his career? I am asking, suggesting, hoping, rather than stating.

I would be interested to know the opinion of a bowler.