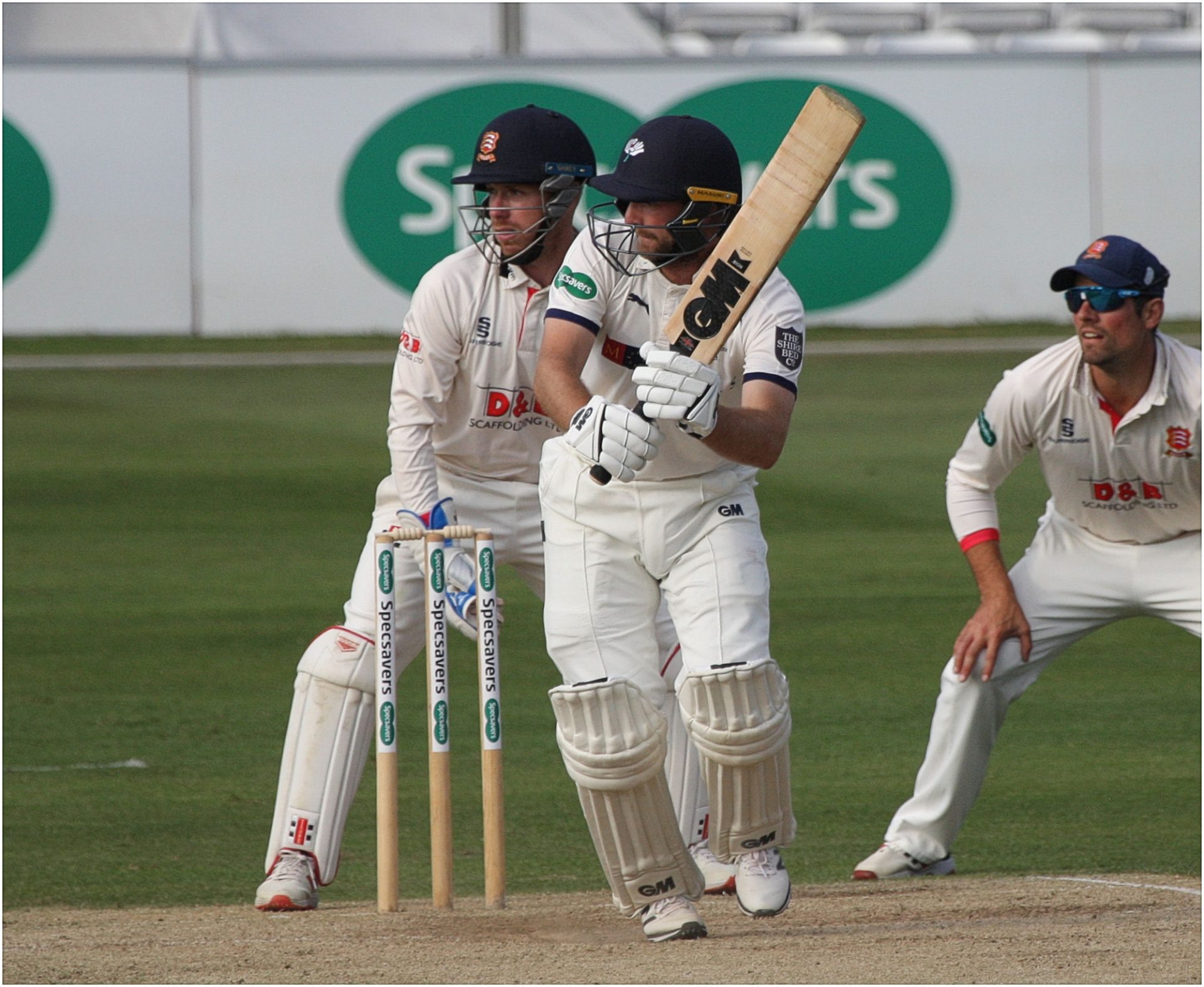 A few games into the County Championship season and you tend to get an idea of the players that may be knocking down the door for England selection. With none of England’s incumbent top 3 in sparkling form, and question marks hanging over the head of Rory Burns in particular, it’s time to look at some players who are quietly chipping away in the background but who may provide a stable option in the upcoming coming Tests against New Zealand.

Surprisingly for batsmen in April, runs have been fairly easy to come by. A combination of little rain and early season frost has made the pitches hard, with many having little on offer for the bowlers after the new ball swing fades. Runs have flowed and some familiar names have provided the goods, such as youngsters Pope, with an exceptional double hundred to his name already, and Lawrence who has performed admirably so far for Essex. Even James Vince, the man all England fans want so desperately to succeed, has notched a double century, albeit against the same weak Leicester attack that Pope ran riot against.

These are the names that are often mentioned when a place in England’s top 3 could be up for grabs. Can Pope finally make it up the order, or will Lawrence be shunted up there to take the pressure off the more naturally talented Pope? Can Vince finally put the drive away and crack Test match cricket? And then there’s the much talked about Haseeb Hameed. Whenever he scores runs there’s always people putting his name forward.

But what about less fancied options? This piece is about them. Can the following unsung county stalwarts spring a surprise and make it onto the top table of red ball cricket?

Libby is certainly one of the most in-form batsmen in the country. A move to New Road from Nottinghamshire at the start of the 2020 season has done wonders for the compact right-handed batsmen, where an opening partnership with Daryl Mitchell seems to have finally allowed Libby to find consistency. This can be seen by his stellar start to 2021, where he began the season by scoring 318 runs at an astonishing average of 108. He was excellent in last year’s Bob Willis Trophy too, scoring 498 at 55.

At 28 years old and a decent, albeit relatively small in comparison to others at his age, amount of 1st cricket behind him, Libby should be reaching his peak. However, there still seems to be many reasons why Libby is not on England’s immediate radar. A career average of 33 doesn’t scream of an International standard player. And whilst many in the set-up won’t admit it, playing for Worcestershire after being deemed surplus to requirements by one of the Test Match ground counties will surely count against him.

All Libby can do for now is keep churning out the runs. England selectors have shown a willingness to select players over the age of 30 recently so he still has time on his side. Despite his mountain of runs in the past 2 seasons, Jake still feels some way away from higher honours.

Chris Dent has shown himself to be one of the most consistent openers on the county circuit. This consistency has once again been shown at the start of the 2021 season, where he amassed 244 runs at an average of 48 in his first three games, including an unbeaten 91 not out against a strong Surrey attack.

The main issue with Dent is not so much his inability to score runs consistently; it is his inability to back up one good year with another. In 2017 he had a good if not exceptional summer, scoring just under 900 runs at 42. However, the following year he averaged 34 – far below the standards required for England to come calling. It has been a familiar story in his last two years: in 2019 he scored over 1000 runs at 47, yet last year he managed just 170 runs at 24.

Whenever Dent seems to be building up steam in terms of England selection, a poor run of form follows. Yet, any opener in English conditions can have lean spells and a career average of 38 suggests there is talent there. At 30, he still has time left, but you feel he will need an incredible run to truly be considered for a Test cap.

Alex Davies has long been vaunted by Lancashire fans as an England player in waiting, none less so than David Lloyd, who tweeted all the way back in 2018 that Alex Davies was ‘international class’.

Davies is yet to have that one massive season that saw the likes of Jennings, Duckett and more recently Dom Sibley get called up to the Test match squad. Yet, consistently scoring runs in the fluent manner that he does at the top of the order is an achievement in itself.

Lancashire fans first took notice of Davies when he scored over 900 runs at an average a tick under 40 at the age of 23. Since then, he has performed admirably, and his average has never dipped below 30 for a season. What’s more, it has steadily improved year upon year since 2018.

However, with just five centuries in 126 innings for Davies, it’s perhaps easy to understand why the now 26-year-old is not regularly mentioned for England. If you take one look at Davies’ stance, upright with a high bat-lift, it seems ideally suited for white ball cricket. It has a striking resemblance to the stance Jonny Bairstow has recently excelled with (at the expense of his Test place).

Maybe it’s this potential technical flaw that puts the selectors off the opener – although he doesn’t stay as leg-side as Bairstow and is exceptional off his pads. Or maybe it’s just his inability to knuckle down and score big runs consistently. For Davies to truly be considered, you feel he needs to have a mammoth season.

Since the move from his boyhood club Yorkshire to Durham, Alex Lees has started to get his career back on track. After making his move permanent for the start of the 2019 campaign, Lees has scored 1465 runs at an average of 39.6 in red ball cricket. This is good going considering the fact he often opens in the North-East of England, where consistent runs are infamously hard to come by.

It is of great testament to Lees’ attitude and skill that whilst former Durham players such as Stoneman, Borthwick and Jennings moved south to improve their batting record (and thus their chances at an England call up), Lees headed north for a new challenge, and it would be hard to say that he hasn’t impressed. Many point to the huge weight placed on Lees at such a young age by Yorkshire. When a legend like Geoffrey Boycott is touting you for England when you’re just 22, then eyes will invariably be tracking your scores on a weekly basis. A fresh start at a new county has obviously helped him to escape the burden of expectation.

Alex Lees probably has the best technique of any player on this list. It is upright but with few moving parts to go wrong. However, you get the sense that such a fall from grace lives long in the memory of the selectors, and it will take a few more years to repair his reputation. Yet if he continues in his fine vein of form for Durham, then we may well see him in an England shirt sooner than you think.

Is Adam Lyth the most likely of any player on this list to earn a call up this summer? With 7 Tests already to his name, including a memorable hundred at his home ground Headingley against New Zealand, he knows what international cricket is like and how the intensity can consume you.

After the start he has made to this year’s championship, where the Whitby native is the second highest run scorer in the competition after amassing 488 runs at an average a tick under 100, you feel it is now or never for the 33-year-old to have a second coming at Test level.

Lyth is a fluent player and, being left-handed, he could be a perfect foil for someone like Dom Sibley. However, it is also that fluency that could hinder Lyth’s future selection chances. He was often caught behind during the 2015 Ashes, where he played loosely outside off-stump. An average of just 13 in that series saw him dropped. However Lyth still possesses good career average of 38, although it would be substantially better if he placed a higher price on his wicket.

When all is said and done, it’s highly likely that England will start the Tests against New Zealand with a top 3 of Burns, Sibley and Crawley. However, if one of these was to play badly against the Kiwis, it’s reassuring to know that behind the fan favourites and talented youngsters, there is a healthy crop of talented county stalwarts quietly churning out the runs. Maybe one of them can successfully step into the breach against India if required?