The women’s T20 World Cup gets underway in Australia in just under a months time with the hosts aiming to defend the title they won back in 2018. If they are to achieve the ultimate success again then Alyssa Healy will, once again, play an instrumental role. But who exactly is she?

It might be tough to believe but Healy spent her formative years with zero interest in cricket and only began to play the sport after relocating to Sydney from northern Australia when a newly established friendship pulled her into the game.

It transpired that she had a fair amount of God given talent and at age 16 she broke gender stereotypes when she was named wicketkeeper – a position she’s since made her own on the biggest stage – at Barker College in the traditionally male dominated schools system.

Within a few months of shining amongst the boys – something that brought about a lot of media noise – Healy was making her first strides into ‘real’ cricket with the under 19 New South Wales and the under 23 national side. It was her batting rates that impressed with 345 runs from six innings for NSW, and 114 in three matches for the Aussies.

On top of her raw abilities though, Healy insists hard work is the key reason for her development and, whilst both are probably true, we can’t help but think her family support network might have come in handy too.

Although a friend opened the cricketing door for Healy, she was actually born into a network of cricketers. Her father, Greg, and an uncle, Ken, were part of the Queensland Bulls squad. But the most famous relative she has is another of her dad’s siblings – Aussie world record holding wicketkeeper, Ian Healy.

Cricket is also in her family though marriage. In April 2016, she wed Australian bowler Mitchell Starc so it’s fair to suggest any potential children will be blessed with some natural ability too. 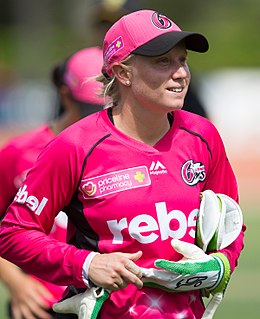 After catching the eye in the youth set ups, the New South Wales Breakers soon gave Healy an opportunity in senior cricket. Things hardly got off to a dream start though – after five innings she was averaging under one! Was she ready for the step up after all?

Fortunately, the next time Healy stepped to the crease she silenced any doubters. She put together an innings of 41 off 50 balls with boundaries aplenty.

She’s hardly looked back since as she has established herself in the top order – as well nailing down the wicket keeping spot – on her way to becoming one of the best players in the world.

In February 2010 a full Australia ODI call up came with injuries paving Healy’s route to the squad. Initially her batting wasn’t anything to write home about – she registered back to back ducks after a promising debut – but she soon established herself and now has an average of 33.11 over 73 matches.

Her T20I debut followed later that month and, again, it wasn’t a good start to life – she dropped a routine catch early on before failing to make an impression with the bat. As time has progressed though, Healy has become stronger than a horse competing in the Kentucky Derby.

She is now one of the most dependable members of Australia’s side having shown incredible consistency dating back to 2014. Her T20 performances have seen her regularly average around the half century mark, and she scooped the player of the tournament award in the 2018 World Cup.

It remains to be seen whether Healy has yet reached her peak. She enjoyed a phenomenal 2019 that saw her named player of the year thanks to a strike rate of 173.02. Meanwhile, she has taken her all time dismissals to 75 – more than any other woman.

Healy’s remained on an upward trajectory for a while now and, in addition to her 2019 player of the year accolade, she also registered a world record score of 148 runs against Sri Lanka in October – the most runs recorded in a T20 women’s match.

Remarkably, that was Healy’s second world record of the year. In February she proved she has a pair of hands that wouldn’t look out of place in major league baseball as she caught a cricket ball from a height of 80.5m – another record.

So that’s everything you need to know about Alyssa Healy – batsman, wicket keeper, world record holder, and all-round Aussie legend. Her opponents in the upcoming T20 World Cup had better beware.