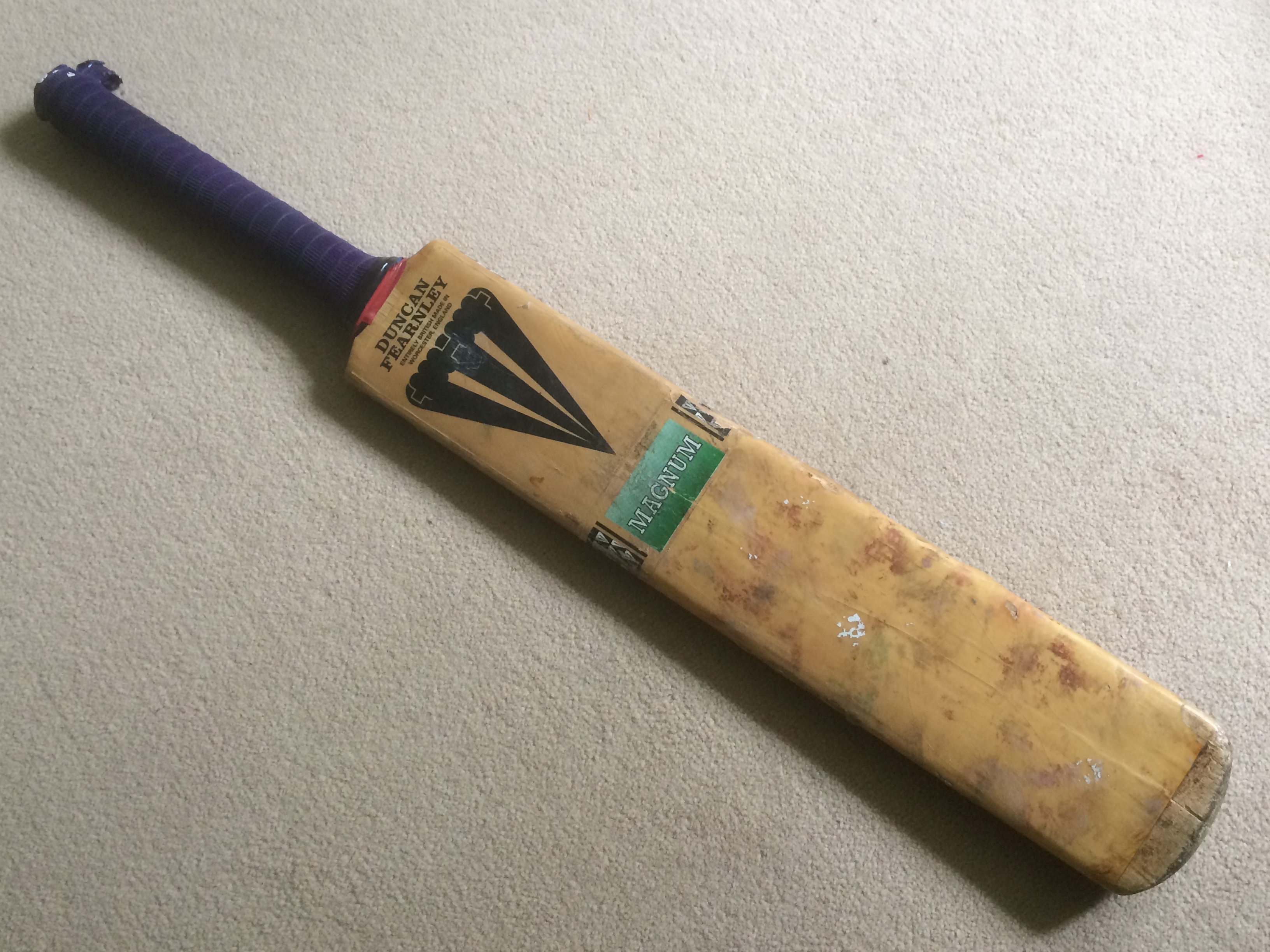 It’s time for a change of pace today. Rather than Maxie and I charging in off the long run with another polemic about the Lord’s debacle, I’ve decided to gently introduce a new topic – cricket bats.

When Maxie and I started TFT a few years ago we wanted the blog to cover amateur cricket too, and become a forum for club and village cricketers like ourselves. We’ve done a bit of this now and again, but not nearly enough. The oscillating fortunes of the England team have generally dominated proceedings.

That’s why I’d like to get a discussion going about bats. What type do you have? Do you treat yours like a loved one, which you take to bed with you and stoke tenderly at night, or is it just a piece of meat you’re happy to abuse and then throw away when it breaks?

How much has a particular bat meant to you? Do you have an old favourite that you’ve nurtured since school, which is cracked, decrepit and only hangs together thanks to heaps fiberglass tape?

I’m ashamed to say I do. It’s an old Duncan Fearnley Magnum that I’ve had for 25 years (pictured above). It’s too knackered to use in a match but I can’t bear the thought of throwing it out. I scored my first two centuries with it as a kid. I hope to use it in the garden when my little boy’s old enough.

I also wanted to discuss how modern bats have impacted the game. I’d love to know what you think about the new breed of bats, which tend to be thicker and softly pressed? We know they’ve impacted the professional game, but have you seen a change at amateur level too?

I’ll briefly tell you why I mention this. I’m a reasonably good opening batsman who’s just realised he’s become something of an anachronism. Despite being a handy player at school, representing Worcestershire at junior level, and playing for my university’s (indoor) seconds, I currently feel completely inadequate at a cricketer. I’ll tell you why.

Over the last twenty years or so I’ve only played cricket on an intermittent basis at a social and village level; therefore I’ve been somewhat out of loop when it comes to the modern amateur game. This year, however, I decided to try out for my kid’s school’s staff and fathers’ team. It’s all T20 cricket – not exactly my style, but I’ve had success in this format before. In fact, the last time I played in an evening T20 league I won player of the season – although this was a long time ago.

I turned up at the first game thinking it would be a breeze. How wrong I was. Modern T20 cricket is no place for an elegant, some would say boring, opening batsman. These days everyone just smacks it from ball one – something I’m not very good at. I usually need a few sighters – preferably ten overs worth.

The last time I played T20 cricket, a total of 120 (a run a ball) was considered to be a good score. My new teammates aim for 180 every time. It’s a whole new ball game.

On my debut I made 17 off 17 balls, and batted quite well – there were a few pleasant on drives plus a few elegant square cuts which flew towards the boundary, only to be intercepted by some young bloke who was unfairly fast and athletic.

As the bloke at the other end was smashing sixes left, right and centre, I made a tactical decision, in the best interests of the team, to rotate the strike at every opportunity and let the behemoth face as many balls as possible.

The bottom line, however, was that I ended up scoring all my runs in singles. When I finally decided the time was right to hit out, I ended up being caught at deep square leg. When I walked back to pavilion I was the butt of all jokes. They’d got a nickname for the newbie: ‘Tinder’. Apparently this is a dating website with lots of singles. The cheeky sods!

However, I’m beginning to think that my bat is the problem, not me. I know this sounds like a lame excuse, but hear me out.

A friend of mine turned up at the last match with a brand new Slazenger. He said it weighted about 2 lbs 10 but it looked absolutely enormous. The edges were huge. I couldn’t believe how such a meaty piece of willow only weighed a couple of ounces more than my eight-year-old Newberry Uzi.

When I put my bat alongside his, mine looked like a toothpick. The edges and middle were literally half the width. Perhaps this why the other guys can hit the ball miles and I can’t. Do you think this theory has any merit or is it just a matter of talent and timing?

I’d love to know whether you guys have been through something similar? Has a new hefty piece of wood solved all your personal cricketing woes? Or should I just accept that I’m an anachronism with no role to play in modern T20 cricket?

If I do decide to invest in a new piece of willow, I’m a little unsure what to buy. Sites like Talent Cricket have so many blades to choose from. The old favourites like Gray Nicolls, Gunn and Moore, Newberry and Hunts County still seem to be going strong, but now there’s a host of new makes I’m unfamiliar with: Adidas, Spartan, Willostix and Ton.

There’s even a brand called Stanford Bats. I hope I don’t have to pay for the latter with a briefcase full of banknotes, or shake Giles Clarke’s sweaty hand on the outfield at Lord’s to seal the deal.

In your experience are these new brands any good? Which brand represents the best value for money? And is there a lot of difference between the expensive and not so expensive bats? I imagine many amateur players won’t be able to tell the difference.

I’m asking for help because a decent cricket bat – one with 7-9 grains and top grade willow – can cost in excess of £350 these days. That’s an awful lot of money to spend on something that’s pressed so softly it might break after a couple of innings. Buying a new bat is now a major investment. I don’t want to buy an expensive plank.