What’s In A Test?

Today we’re joined again by James Wilson author of Court and Bowled: Tales of Cricket and the Law. Alan Jones fans won’t be happy with this. Ahem.

Crossing swords – or Gray-Nicolls – with David Gower is not something I ever envisaged when I started following cricket, or even when I started writing about it in earnest. It is certainly not something the seasoned hack, let alone the amateur scribe, ought to attempt lightly if at all. I have never faced Clive Lloyd’s deadly fast-bowling quartet, gone drinking with Ian Botham, competed for a buffet with Mike Gatting or appeared on television with Jonathan Ross. I haven’t scored a single test run, never mind 8231. Far be it for me, therefore, to dispute a point of cricket with the man who has done all of the above and at the time of his enforced retirement had played more test matches for England than anyone in history.

Nonetheless, I have recently been driven – and this is no time for puns – to take issue with the languid batting genius on Twitter. To defend myself against his many admirers – among whose number I still count myself – I thought I should set out my reasoning here.

Our point of contention concerns a side-issue raised by the recent retrospective re-awarding of a test cap to Alan Jones, hitherto the holder of a proud if unwanted record of the most runs scored in first class cricket by someone who never played test cricket. On that basis I had selected Jones as one of my ‘Unluckiest XI’ players. The story of Jones became all the more unfortunate because he was selected to play a test match for England in the 1970 Rest of the World series and given a cap accordingly, only to have it taken from him (figuratively; he rightly kept hold of the physical one) when a few years later the ICC determined that that series did not have test status after all.

Half a century after the matches, the ECB has given Jones his cap back officially. He was naturally delighted and so were many cricket followers on Twitter, including Gower, who tweeted on 18 June ‘Rest of the World team 1970. B Richards, Barlow, Kanhai, G Pollock, C Lloyd, Sobers, Engineer, Initkhab, Procter, McKenzie, Gibbs. Not worth test status? Give me [email protected]&£&£9 strength!!!’

I responded below with: ‘But that’s not the definition of test match. Countless Sheffield Shield sides of the past 50 years have been stronger than many contemporary test sides. The definition of “test match” is contest between 2 full member states of ICC. No RoW team could ever meet that criteria.’

And therein lies the key point – the definition of ‘test match’.

At this point we can leave aside Jones himself, because the ECB was not re-elevating the RoW series to test status – only the ICC could do that. Instead, they were giving Jones a cap for sentimental reasons, to which I do not object. (I still like the old story that they asked for his cap back in the 70s but were told that it had been ‘misplaced’, though I think it is apocryphal.) 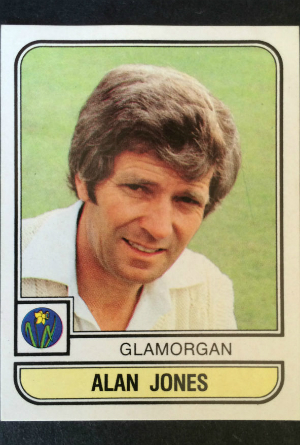 What, then, defines a ‘test’? It has not been the same immutable criteria over the years. In fact, what is now considered the first test – England v Australia at Melbourne in 1877 – was not called that at the time, or otherwise considered more significant than earlier fixtures beyond the fact it was the first time that a representative England team met a representative Australian one on the same terms, in particular XI vs XI – in earlier matches the presumed superiority of English sides would lead to ‘odds matches’ in which the opposition would be allowed to field more players. The English side of 1877 was not called England or MCC (touring English sides played under the rubric of ‘MCC’ for more than a century), but James Lillywhite’s XI. It could not be considered the strongest possible England side of the day because WG Grace was not among its number. (Grace’s brother Fred had been trying to organise a tour around the same time which would have included amateur players instead of Lillywhite’s exclusively professional players, but it fell through. Meanwhile, England’s best wicket-keeper, Ted Pooley, was in jail in New Zealand for assault.)

When the concept of ‘test’ came to be formulated, various of what we might consider important components were not settled, such as the length of time (timeless tests and shorter fixed duration ones occurred until the Second World War), or the number of balls per over (8 ball overs were used in Australia and occasionally elsewhere until 1977/8). Before the war, England once fielded two simultaneous test sides, because it was presumed when playing weaker opposition than Australia they would still be competitive. Similarly, the Victorians and Edwardians were much less bothered about nationality, hence the likes of Albert Trott representing both England and Australia.

Broadly, however, the criteria of representative sides of recognised cricket countries to play four-innings matches has been the defining criteria ever since the retrospective consideration of the 1877 match. Such is now enshrined in the ICC’s own rules, which hold that test matches can only be played between full ICC members.

Note that the definition of ‘first class’ is somewhat more elastic, and I would not argue for it to be more rigid. There are three reasons. First, no one ever argued against slap-up teams of appropriate quality being given first class status, as opposed to confining first class status to representatives of states or districts. It used to be a very common occurrence for touring sides to play composition XIs made up of players on the fringe of test selection, benefitting both sides as it meant better preparation for the tourists and a good chance for the home selectors to see the players they were mulling over in action. ‘First class’, on my understanding, meant more or less what it said – an organised match of (theoretically) high standard but not involving two full international teams.

Secondly, the status of first class is certainly important, but nothing close to the importance of test cricket – sentimentally, statistically or financially.

Thirdly, the definition of ‘first class’ would be harder to set down with finality, at least not without removing the status from a host of matches (or conferring it, depending on the definition) long considered to have enjoyed it, with the consequent rewriting of countless career statistics. About 40 years ago there was just such an attempted rewriting of statistics when a cricketing historian decided that his research showed that two of WG’s hundreds should be deducted from his record because they had been made in matches which should never have had first class status. Wisden eventually came down on the side of inclusion, rightly in my view since it would have invalidated so much of what happened since, not least the celebrations held when Jack Hobbs beat the original record. (See Wisden, 1982, p 127.) Similarly, I would not object to any RoW fixture or the Packer matches being classified as first class.

Turning now to the 1970 Rest of the World tour, one can understand why it was initially given test status. The players and public had been expecting to see a test series involving South Africa, which was one of the best sides in the world at the time. There was not the possibility of substituting another national team in the time available. It would also have been easier to entice the best players available to form a World XI if the matches had test status – though on the other hand the earning potential of professional cricketers in those days was far less than today (it being the pre-Packer era when they were paid a comparative pittance) and the international calendar was far less packed, so they would not have had the same ennui as modern players might if asked to cram in yet more fixtures. As it was, strong international sides were chosen for both the England and Australian series (though not necessarily the best of the RoW) and the play was undoubtedly of the highest standard.

That was a stronger case for test status than the dismal failure of the 2005 series. Not because the players involved in the latter were inferior – Lara, Kallis and others were a formidable side on paper – but because the 2005 players were simply not as motivated as they might ordinarily have been when touring Australia. Andrew Flintoff, in the aftermath of England’s triumph at the Oval not long before, let slip he couldn’t think of anything worse. (The Australians, on the other hand, as Matthew Engel noted in Wisden, a month after their shock Ashes defeat were happy to kick any available arses.) A number of cricketing writers disputed the conferring of test status at the time, including the Bearded Wonder Bill Frindall and later the author Mukul Kesavan.

As I said earlier, however, the quality of a match has never been a requirement for a test match. In times of Australian and West Indian dominance, the quality of the fixtures between their better domestic sides (technically international in the case of the WI – another story) would have comfortably exceeded most test matches, not simply some of the embarrassing turnouts of Zimbabwe and Bangladesh over the years which served only to inflate the career stats of their opponents. When a New Zealand side was forced to tour Pakistan in the 1980s without several of their best players including Richard Hadlee, Imran Khan refused to play as he did not consider them worthy opponents – as it proved on the pitch, but no one thought about deducting test status, because it was still the representative team chosen by the New Zealand board. England themselves in India in 1992/3 – the tour from which Gower was disgracefully excluded by Gooch and Fletcher – played less like a test side and more like the Ilford Second XI (an insult directed against Hadlee’s fellow bowlers in an earlier series England lost). The MCC bicentenary match of 1987, on the other hand, contained brilliant cricketers, several of whom played out of their skins, but no-one thought it should be a test. Many more examples in both directions might be found.

Instead we are left with the same point we began with: the rules provide tests are only between full ICC member nations. If the ICC was an English public body, its decision to award test status in 2005 to the RoW ‘supertest’ could undoubtedly have been successfully challenged by way of judicial review. And there is an end to it. The proper answer to the inconsistency between the 1970 and 2005 fixtures is for the latter to have test status removed, not the former to be upgraded. They should both be first class matches only. (The same considerations should apply to limited overs’ internationals and hence the farcical ‘Australia A’ matches of 1994/5 and some of the Rest of World XI charity matches held from time to time should be downgraded from official international status to ‘List A’, although as a rebarbative old cricketing tragic I am much more bothered by test matches.)

To finish on a sentimental rather than legalistic perspective, however, consider the following: the 1970 matches were arranged only because South Africa could not tour. The reason they could not was due to the decision of other nations not to play against an apartheid side. We all know who to blame for that state of affairs, and the collateral damage to cricket was a small price for righting that wrong.