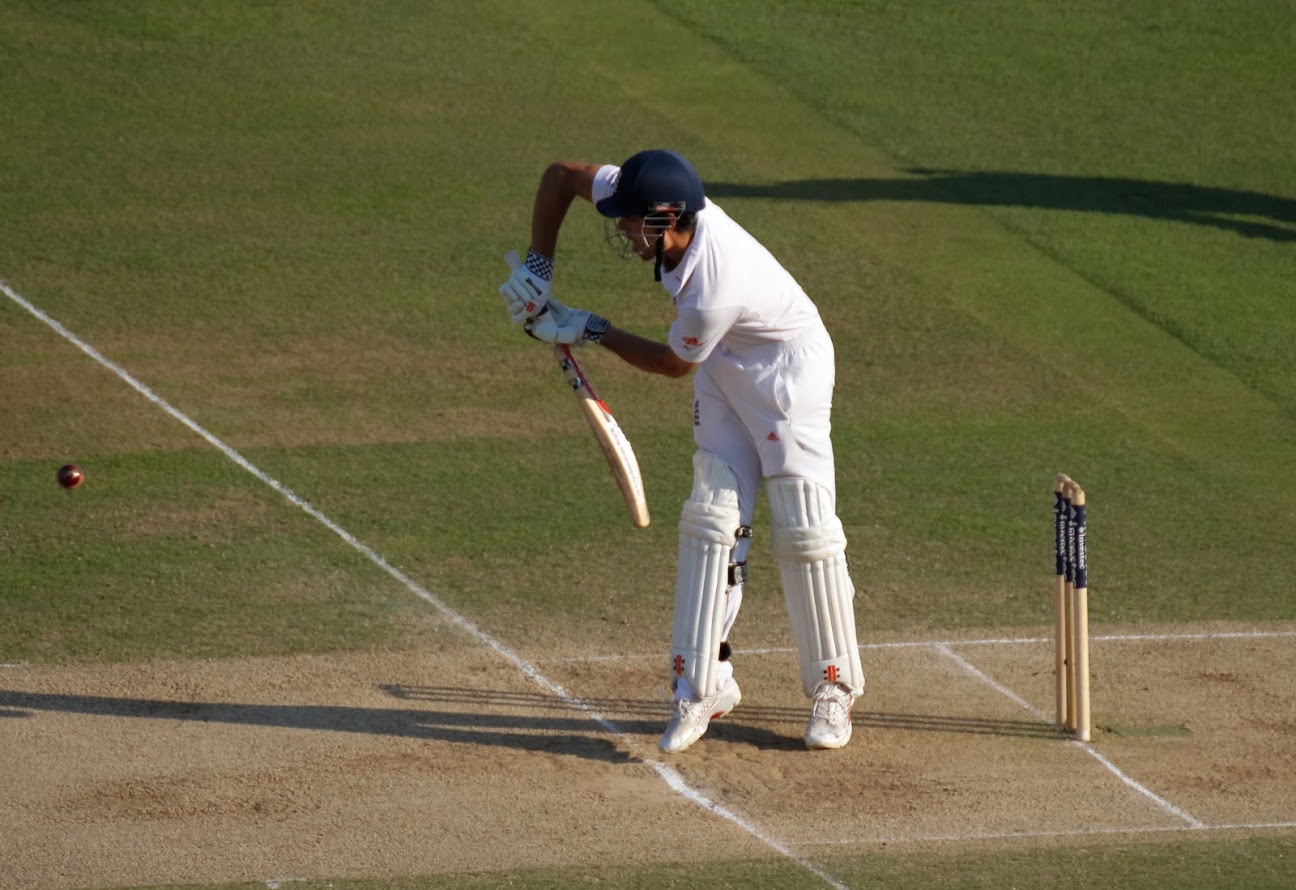 The redoubtable commentator Henry Blofeld once observed one day cricket is an exhibition; a test match is an examination. If so its keenest students are the opening batsmen. The single minded, tactic driven obsessives who commence the innings. They face the new ball and a bowling attack designed to unsettle and probe for weakness. If the toss is lost there could also be the small matter of a turning wicket favouring the bowlers. An opener may have the full repertoire of shots in their locker; but will rarely have any need for them. They play every delivery on its merits and only look for boundaries when safe to do so. They push the score along with stone cold pragmatism and dourness. Neutralise the bowlers, protect the middle order and above all don’t lose your wicket. Many shoulder the added burden of captaincy, and England has a long line of practitioners in both disciplines.

Geoff Boycott was the text book opening batsmen who learnt his trade when it was still very much an art. A methodical and naturally cautious player he never took unnecessary chances; although would often be his own worst enemy. In June 1967, Boycott scored an unbeaten 246 in a six wicket victory over India. But he was dropped from the next test for disciplinary reasons.  It later emerged his omission was due to a deathly slow run rate especially on the first day, when the majority of spectators had left by tea. Ten hours at the crease with a strike rate of 44% was hardly edge of the seat stuff. But he did score 30 boundaries and shared three century partnerships; his innings had put England in a position where they couldn’t be beaten. Wasn’t he simply doing his job as an opening batsman? Boycott’s reputation had largely preceded him, and his fondness for shooting from the lip surely didn’t help his cause. For obdurate determination he had no equal; if anyone could carry his bat through an innings it was Boycs.

For all his qualities, Boycott could be selfish and thought nothing of running someone out to protect his own wicket. In 1974, he ruled himself out of the test side after reported differences with new captain Mike Denness. He returned for the 1977 Ashes and replaced Dennis Amiss in the 3rd Test at Trent Bridge. Local hero Derek Randall took the crease at 52-3.  Boycott ran for a risky single but didn’t call for it. Randall, a speedy runner between wickets was stranded at the wrong end. The crowd reacted with furious anger; he ran their boy out.  Boycott went onto to score 107 and became only the second player to bat on all five days of a test match. His smug radiance could be seen across five counties.

Boycott’s test career straddled three decades and 16 different opening partners. One of his more notable oppos was Mike Brearley; a master tactician who couldn’t cope with the responsibility of opening and captaining the side. He averaged only 22.88 and failed to hit a century but scored tons for fun at county level. It was Brearley’s skills as a captain that earned his place even if it meant sacrificing his own wicket. Brearley’s record of 17 wins and 4 defeats in 31 tests as captain is formidable. His blind spot is all the more baffling when he combined both roles so effectively at Middlesex. The functions of captain should sit perfectly with the opener who cogently leads from the front?

There were no such issues for Graham Gooch who enjoyed a 20 year test career and scored a staggering 8,900 runs. As the 1980s progressed he established himself as England’s premier opening batsman. He captained England for three years and clocked up 11 centuries in the process including a monstrous 333 against India in 1990. Gooch was the antidote to Boycott’s metronomic styling; he claimed to have only three shots in his locker, but had the confidence to entertain and keep the run rate ticking over. He formed a legendary partnership with Mike Atherton at the beginning of the 90s. They shared some heroic first wicket stands including three double centuries. Their partnership of 225 against India in 1990 is England’s 10th highest first wicket stand of all time.

When Gooch stepped down as England captain it was 25-year-old Mike Atherton who took the reins. His early outings as skipper weren’t successful; a loss to Australia was followed by a 3-1 series defeat against the West Indies. But soon found his feet with back-to-back centuries in the series victory over New Zealand in 1994. He survived the infamous ball tampering incident against South Africa and became one of only five players to captain England in 50 or more tests. His mental toughness was assured and dodged the missiles of public opinion with relative ease. Atherton was best with his back against the wall and played a true captain’s innings against South Africa in 1995. He doggedly resisted a ferocious Alan Donald to score an unbeaten 185 and salvage a draw.

Atherton’s most frequent opening partner was Alec Stewart, a natural middle order batsman and sometime wicket keeper. The Surrey right hander brought aggression and purpose to the role. He was the ultimate Johnny on the spot; keeping wicket, deputising as captain and opening the innings. Stewart averaged 46 as an opening batsman and made a record 133 test appearances; fifteen test centuries and a top score of 190 are remarkable figures for a player distracted by other disciplines. As Stewart’s test career drew to a close a new breed of opener began to emerge.

Marcus Trescothick made his test debut in 2000 against the West Indies. The media were quick to eulogise about the man from Somerset; a player with the temperament of Graham Gooch and stroke play of David Gower. In 2004, he formed a magnificent partnership with the newly capped Andrew Strauss. They shared an opening 1st wicket stand of 273 against South Africa; Tresco hailed his new partner, marvelling at how easy he made it look and that nothing fazed him; a description just as easily applied to Trescothick himself. With Michael Vaughan as captain the resurgence of English test cricket was in sight as the 2005 Ashes beckoned.

A memorable 2-1 series victory secured the Urn for the first time in almost 20 years. The opening pair shared over 800 runs with Tresco hitting an average of 43. However, there were storm clouds gathering when he returned from the 2006 tour of India due to a stress related condition. His England career continued to falter until it was announced in 2008 he would not return to international cricket. Trescothick’s autobiography later revealed he had suffered anxiety attacks since childhood; and playing domestic cricket meant he was only ever three hours away from his family. It was a refreshingly honest assessment of how depression affected his life; and an indication of the pressure routinely experienced by elite cricketers.

But it was Trescothick’s sad return from India that paved the way for Essex opener Alastair Cook to form the greatest England opening partnership of all time.  Cook complemented fellow left hander Andrew Strauss perfectly and became the Yin and Yang at 1 and 2. Cook revelled in the concentration of a long innings, while Strauss cut loose as the attacking element of the partnership. They opened together on 117 occasions and scored 4,711 runs at an average of 40.96; they threw in a dozen century stands just for good measure. When Strauss stood down as captain grasshopper Cook was his natural successor.

Cook was the archetypal opening batsman, and no real coincidence he was coached at Essex by Graham Gooch. Cook steered England to number 1 test status culminating in 2013 with another Ashes victory. However, dressing room tensions showed expectation generated more heat than light. He renounced the England captaincy in 2017 to gradually bring the curtain down on a glorious test career. His successor Joe Root tellingly drifted down the batting order after opening with Cook in 2013. Is the delicate balancing act of opening and captaincy generally too much even for the best of cricketers?

As hungry young openers jostle for the top end this summer, it seems a poisoned chalice with more risk than reward. Many are called but ultimately few are chosen. Opening batsmen can be a combination of fire and ice but still have to stick with the brief. They are unlikely to be universally loved because of the responsibility they assume. Openers don’t have luxury of a middle order batsman who can rescue the innings; nor can they afford the crowd pleasing showmanship of an all-rounder. An opener is almost certainly saddled with the captaincy at some point in their career; simply because the job sits better with a top order player. It’s an assumption born on the battlefields of history that a captain leads from the front. God bless the opener and all the brave souls that take the job on.