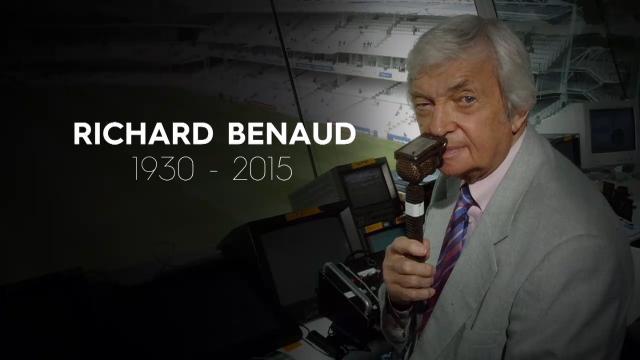 Richie Benaud was a huge part of my childhood and young adult life. He was the voice of summer and long school holidays; of mid-morning custard creams and lemonade, and more recently of mid-afternoon pints and Twelfth Man hilarity. Much like when Rik Mayall was taken from us last year, it feels like I’ve lost a close friend I never met.

Through the good times and the bad, Richie was always a constant in my life. He was like a mystic father figure – a doyen whose wisdom I sometimes tried to apply to life in general. I was a bit of a fiery adolescent, so Richie’s dulcet tones (where every word seemed measured and thoughtful) provided something of a blueprint. Don’t fly off the handle: the most effective words are those delivered selectively and with dignity. Richie was a sage.

Of course, Richie was a brilliant cricket commentator. Probably the best of all time. When he spoke, people listened. Channel Nine seems to have changed its commentary philosophy in recent times – three ex-players now jabber on incessantly – and sometimes they even talk about the cricket amongst their matey banter. Richie’s method was famously different: he only said something if it added to the pictures. And boy didn’t he do it beautifully,

When Sky won the exclusive rights to televise live test cricket in 2006, English summers were never the same again. An old school-friend once said to me that summer wasn’t officially summer until Richie said ‘morning everyone’ at 11am on the first day of that year’s first test. In time I might feel the same way about Bumble, Nasser and Athers. I’m fond of these guys, but how do you replace the irreplaceable?

I’m too young to remember Richie as a player (I hear he was an excellent captain, a good leg spinner and useful batsman) so I’ll always remember Richie purely as a commentator – sitting in the central commentary position like a statesman in his cream, white, off-white, ivory or beige jacket

In my humble opinion, TV cricket coverage these days tries a little too hard to be stylish and modern. Sky’s team often appear without jackets and ties and with their sleeves rolled up. There’s nothing wrong with this I suppose, but somehow they were never as effortlessly cool as our favourite Australian cricketing doyen.

Ask yourself this: how many kids try to imitate Nick Knight? When I was at school, the coolest kid in class was often the one who could do the best Richie Benaud impression. And this was before the Twelfth Man arrived on our shores.

Richie wouldn’t necessarily like it, but I can’t write a Richie tribute without mentioning Billy Birmingham’s side splitting parodies. Even though they were absurd, and couldn’t have been more different to the real man, Birmingham’s impressions took on a life of their own.

Once upon a time you couldn’t say the words ‘Richie Benaud’ without someone uttering ‘chew for twenty chew’ out of the side of their mouth, or launching a full rendition of Marvellous by MCG Hammer.

Some might not agree, but I always thought the Twelfth Man enhanced the cult of Benaud and added to his popularity. I hear that Richie wasn’t Birmingham’s biggest fan, but imitation is the sincerest form of flattery. The Twelfth Man wouldn’t have been so popular had the public not loved Richie so much.

Although today is obviously very sad, take comfort in the fact that Richie is now in cricketing heaven. This summer he’ll be up in the sky watching the Ashes, looking down on us with a satisfied smile and a cheeky glass of chardonnay in his hand.

Richie matured like one of his favourite wines and was the ripe old age of 84 years old when he passed away. He didn’t just have a good innings; he had a truly a great one.