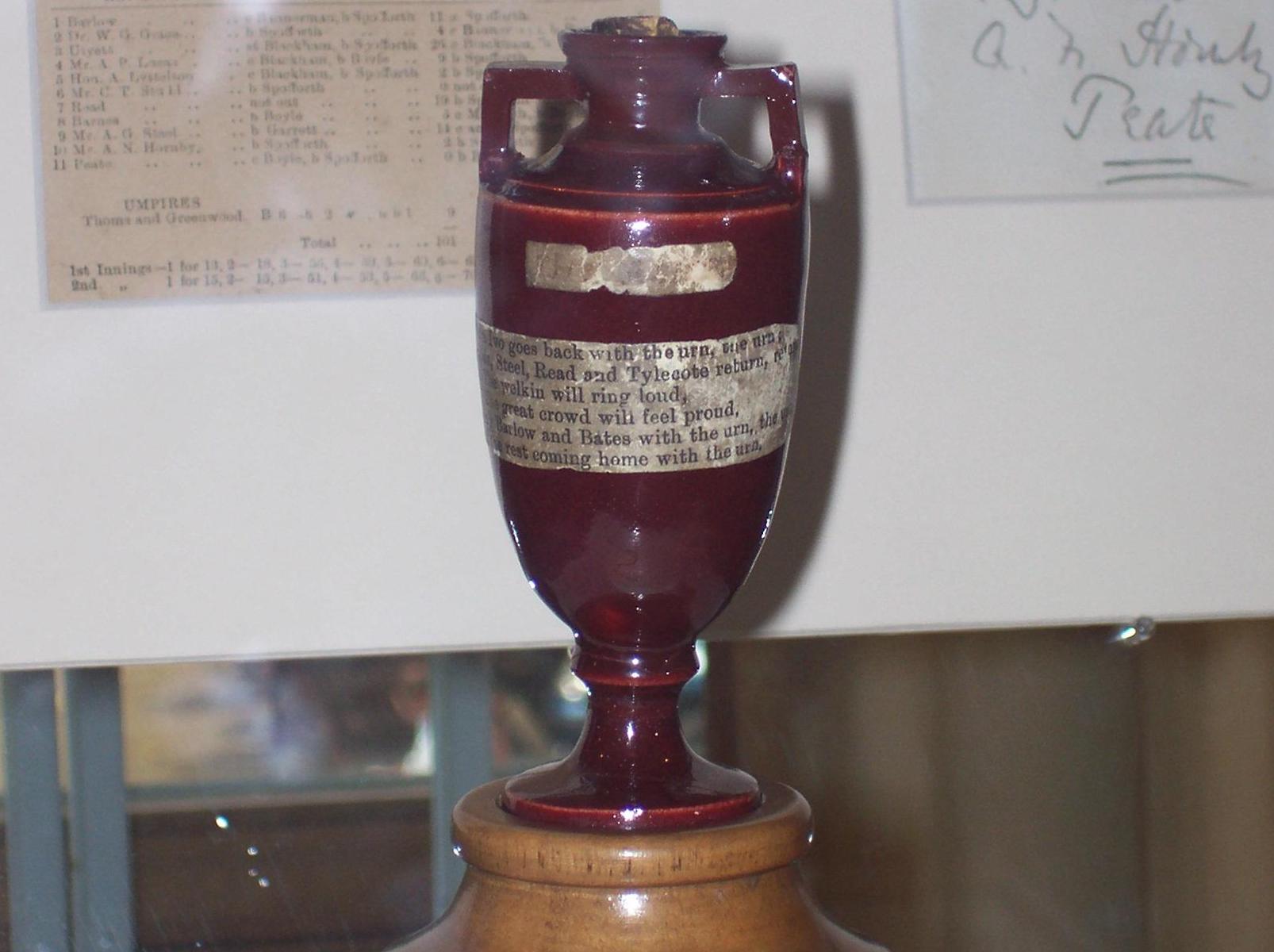 See the urn in this picture? It’s ours. It’s bloody ours. I’m delighted.

For all the arguments that have blighted English cricket over the last eighteen months, it was the sight of the old enemy that finally turned things around. When confronted by the prospect of David Warner downing tinnies and Mitchell Johnson singing ‘Killer Queen’ victoriously on The Oval balcony, the lion’s share of the English public suddenly got behind its team again.

This made a huge difference. Would we have won the Ashes without the brilliant crowd at Edgbaston, and to a lesser extent Cardiff and Trent Bridge too? Not on your nelly.

I suppose it all started with the ODIs against New Zealand. The public enjoyed the attacking cricket played, and the sight of a few new faces, and they were prepared to let bygones by bygones. According to all the polls on Cricinfo and The Telegraph, over 85% of people thought Pietersen was badly treated. But the key point is this: why did the public support KP? Because he was entertaining and we stood a better chance of beating the Aussies with him in the team.

When England began to play attractive cricket, and started beating Australia anyway, the arguments were laid to rest. This won’t please everyone, and there will still be some who can’t forgive and forget (a perfectly valid position to hold), but this is what happened.

With the majority finally behind the team again, the pressure valve was released. The dismissal of the unpopular (outside the dressing room at least) Peter Moores and the removal of Paul Downton also helped. Suddenly, public enemies number two and three were gone. Meanwhile public enemy number one, Giles Clarke, buggered off to the ICC, where he fits in very nicely thank you. Him and Srinivasan make a lovely pair. And by lovely I mean repellent of course.

Although Andrew Strauss handled the KP ‘recall’ issue appallingly – deep down we all know he was appointed because he’s cut from the same cloth as the ECB aristocrats and he was the only candidate that didn’t want Pietersen back – Strauss actually got some major decisions spot on.

For starters, the decision to sack Moores was one hundred percent right. It was a tough call, considering the beef that previously existed between the pair, but it was the right one. Strauss then shunned the populist candidate, Jason Gillespie, in favour of Trevor Bayliss.

Again this was an utterly brilliant decision. Gillespie is likeable and has been successful at Yorkshire, but Bayliss was the hard-nosed veteran, and the cool head, that England have needed for a long time. While Gillespie had enjoyed success at domestic level, Bayliss had enjoyed success at both domestic and international level. There’s really no comparison. Bayliss was the best candidate by a mile. Their CVs don’t even compare.

A major reason England have won the Ashes is the dramatic improvement in Cook’s captaincy. In my opinion this is a direct result of Cook freeing himself from the stale, unimaginative, attritional ethos of Flower and Moores.

When Ian Ward asked Bayliss whether the skipper seems liberated and full of ideas because the coach has ‘the odd word in his ear’, Bayliss smiled, nodded and answered in the affirmative: “I simply put a couple of thoughts in Alastair’s head and he chooses which one to implement”.

Meanwhile, Strauss and Bayliss assembled a superior backroom team. As pointed out by Teece in Maxie’s questionnaire post yesterday evening, the re-appointment of Otis Gibson has made a huge difference. Most of us were sick of David Saker, and Gibson’s fresh ideas really reinvigorated the attack. England’s plans for each Aussie batsman were spot on.

It was also a masterstroke to retain the services of Paul Farbrace – who many of us thought should have got the job when Moores did. I sense that Farbrace is the glue that holds the dressing room together and makes the players feel comfortable.

Because England got these off-field decisions right and were able to play with a modicum of freedom – a result of reconnecting with the public and the fact they were big underdogs – the team approached the Ashes in exactly the right frame of mind. The result? Things just went our way.

The phrase ‘you make your own luck’ is a bit too simplistic for my liking, but it has an undeniable element of truth. I think England got lucky – we were on the right end of important tosses and our batsmen played-and-missed considerably more – because we felt good about ourselves.

The players embraced the series in exactly the right manner and played as though they had nothing to lose. Moeen Ali’s important cameos down the order, which often happened at crucial times, embodied this joie de vivre. When England were under the pump, Mo did some happy hitting and swung momentum back to England.

Obviously this is a somewhat philosophical argument, and there are more tangible reasons for England’s success – Ryan Harris retiring, Joe Root outscoring Steve Smith handsomely, and our bowlers showing far more consistency than Johnson, Starc and the overhyped Hazlewood – but this is my indie view.

Some people will claim, of course, that the Ashes victory vindicates Downton, Moores, Whitaker and Strauss’s stance over Pietersen, and claim this is why England won the Ashes. Such a position is so banal and witless there seems little point dignifying it with serious discussion. Only Joe Root of England’s batsmen shone, and half the team is either friends with Pietersen or said complimentary things about him after the last Ashes.

We would’ve won more comfortably with Pietersen’s runs in my opinion. Let’s not forget that Downton and Moores lost their jobs for a reason. I doubt the World T20 and the World Cup would’ve been so disastrous without the needless controversy KP’s outright sacking caused. I’m sure Alastair Cook wishes the ECB had done things differently. Even Strauss admits it was handled badly.

However, this Ashes win is significant because the Pietersen issue is now dead. Hallelujah! Whenever I criticise the ECB most people I speak to immediately think it’s all about KP. I’ve wasted hours explaining that I’ve always been ambivalent about Pietersen. Whenever an ECB critic mentions the ‘P word’, the person they’re speaking to immediately stops listening. This is not the issue with which to win friends and influence people – to convince them that the ECB is cheating English cricket, world cricket and the public.

If you haven’t done so already, please, please, please go and watch Death of a Gentleman. The way the ECB has stitched up the rest of the cricketing world alongside the BCCI and the ACB is appalling, unethical and it makes me embarrassed to be an England supporter. These are the issues we need to ram home.

I also think it’s a tragedy that only a fraction of the population was able to watch the brilliant Ashes win on TV. Sky do a brilliant job, but their monopoly of live cricket on English TV is terrible for the game. The football and rugby Premierships might be on pay TV channels too, but crown jewels like the FA Cup and the World Cups remain on free-to-air. This is crucial. Rugby fans will tell you that the Six Nations and the World Cup are the only things that keep the sport relevant.

When it comes to holding the ECB to account, I sense corruption and greed are the issues that will resonate most. I know some people are worried that an Ashes win will paper over the cracks, and convince the public that English cricket in good hands, but I promise you it won’t – just so long as bloggers like ourselves, and Being Outside Cricket, and all the good people who read and comment on this blog, keep plugging away. They won’t get away with it because we won’t bloody let them.

Anyway, I’m not going to sign off with a political rant. I’m going to finish by returning to today’s amazing scenes at Trent Bridge. While the nation’s footballers continue to betray their fan bases by jumping ship at the first sign of a bigger pay cheque, and strut around like nouveau riche yobs, our cricketers are a breath of fresh air.

The joy on the faces of Joe Root, Ben Stokes, Moeen Ali, Jos Buttler and Mark Wood (who is delightfully innocent, down to earth and ever enthusiastic) was the highlight of the day for me. These are our guys. They played really well and we’re all proud of them.

They can’t help it if their employees are incompetent and disingenuous. Nobody likes their boss anyway, right?