Today we welcome 13-year old writer Rahul Palaninathan to TFT. I really like this topic. It’s a tribute to all those understated and underrated finger spinners out there.

The 2005 Ashes. A series that revived a national sport as the squashbuckling English team slew the legendary Australian juggernaut. It will go down in history as one of the greatest contests in the history of sport.

The English team was lauded by the whole country for its bravery and prowess but no one’s lives changed as drastically as it did for the two leading performers in this epic battle: Andrew Flintoff and Kevin Pietersen. Flintoff, for his never say die attitude and his reverse swinging cannon balls that zoomed past the batsmen’s futile defences, and Pietersen, for his jaw dropping stroke play as he arrogantly dispatched one of Wisden’s 5 cricketers of the 20th century. Both players became high profile heroes revered as the saviours of English cricket.

However, in that Ashes victory there was a man who did all the dirty work. He performed the job no one ever wanted to do. And that man was just as pivotal in the victory as the men who were commended by the media:

That man was the brilliant and understated Ashley Giles.

Ashley Giles is the unglamorous type but his unselfishness, discipline, and his dedication to the team made him worth his weight in gold. Lacking the prodigious spin and revs that a bowler like Shane Warne produced in abundance, Ash made up for it in heart and willingness to do whatever it takes to help the team.

When it’s a sweltering hot day with the sun beating down without mercy and the fast bowlers are drenched with sweat and need a break, Ashley Giles is your man. He holds up an end and ensures pressure is maintained so the fast bowlers can reap rewards.

To be effective he has to land the ball on a 5 pence coin again and again. He has no room for error otherwise the batsmen will score a boundary and the pressure he’s building would be released.

And yet, somehow, Giles managed to build this indispensable pressure far more often than not.

There must be an enormous mental burden to land the ball on a spot every time. What’s more, it must be incredibly difficult to control your ego and not go searching for wickets. The discipline required cannot be understated. 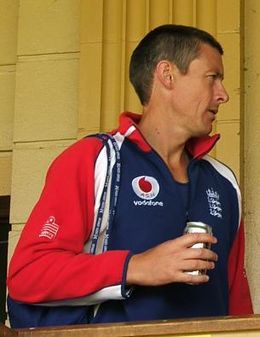 The 2005 Ashes fast bowlers therefore owed a great debt to Ashley Giles. But not just them, every fast bowler that has a similar bowler in their team is in debt to that unglamorous spinner. After all, Ashley Giles is not the only bowler of this type as there have been many bowlers across time who have fulfilled this role.

Let’s have a look at some modern exponents of unglamorous spin:

Ravindra Jadeja is perhaps the best example. We all know what an X factor fielder he is, and it’s a well-known cricket trivia fact that he’s scored 3 first class triple hundreds. However, his bowling is as unglamorous as it gets.

Jadeja mostly relies on changes in pace but takes bags of wickets when conditions suit – especially at home. But in overseas conditions he is a different bowler. He uses his pinpoint accuracy to bowl a consistent line and length and occasionally uses a change of pace. His rapid run up also hurries the batsman and he is often called upon by Virat Kohli at the end of the day to squeeze in some extra overs.

Ravi’s accuracy and change of pace also make him a more than handy bowler in limited overs cricket. Combined with his all-round abilities, Jadeja is a wonderful 3-dimensional player that any side would love to have.

Nathan Lyon is another fine bowler. He’s a lethal attacking option when conditions suit but he can also play an excellent holding role when the pitch is more suited towards the big quicks. Having arguably the best fast bowling attack in the world around him, it is important that he can play a defensive holding role to maintain pressure so the fast bowlers can stay fresh.

Coupled with his unrelenting line and length, his extra bounce, and ability to bowl that ball that slides into the batsmen, it’s no wonder that Lyon has played almost a 100 test matches for Australia and has become his country’s most prolific off spinner.

Jadeja and Lyon are just two of the world’s unglamorous but effective spinners. There’s also Keshav Maharaj, Rakheem Cornwall, Washington Sundar, and Chris Green to mention a few. But why are these bowlers so unappreciated?

Back in the 1980s crowds like to see fast bowling and bouncer barrages. Spinners weren’t given much attention. And when a spinner did hit the headlines it was usually a leg spinner like Mushtaq Ahmed. Off spin just plodded along without any real progress.

Shane Warne’s famous ‘Gatting ball’ also put unglamorous spinners in the shade. Rather than wanting to be the next Curtly Ambrose or Courtney Walsh, many kids wanted to become the next Shane Warne. Overnight, Shane Warne became a de facto ambassador for leg spin bowling and also for glamorous spin.

Suddenly the emphasis went from reliability and economy to wicket taking potential – despite the fact that most leg spinners (the mere mortals) were potentially unreliable. Humble off spin became a lost art.

Fortunately, however, T20 teams understand the potential of having an accurate off spinner, even during the powerplays. For example, Chris Green, a bowler with no magic variations or tons of spin, was rewarded for his economic bowling in the powerplay with a monumental 7-year contract with the Sydney thunder.

Although the advent of DRS, and the emergence of bowlers like Graeme Swann have also boosted the profile of finger spin, T20 has played an important role in bringing orthodox spin bowlers back into fashion.

One hopes this trend carries on. Ugly ducklings can often turn into beautiful swans.