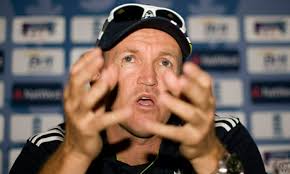 First of all, I must talk about yesterday. Maxie and I usually juggle the daily match reports according to workflow, but yesterday was different. I was unable to write the report because I was, to be blunt, too bloody angry to write anything.

Had I attempted to put fingers to keyboard, all I would’ve managed is an incoherent rant and a succession of swear words. You’ve all put up with the former for years, but the swearing is something we try to tone down.

I won’t go on about this too long, I promise, because it’s nothing the media haven’t already discussed. However, I’d like to add my name to those who were utterly disgusted with Andy Flower’s team selection yesterday morning.

To turn up at the fastest pitch in the world, devise a plan involving a copious diet of short balls, and then leave out your fastest bowlers goes beyond incompetence. It was pathetic. Andy mate, your time is done. I’m sick of your whole approach.

Anyway, on to today’s play. There’s little we can say that we haven’t already said a million times. England are playing as badly as it’s possible for them to play, while the Aussies are playing commendably for a side that’s been beaten by just about everyone for the last two years.

Well done to them (said through gritted teeth of course!) and well done Steve Smith, who played very well yesterday. Maybe he’ll just about hold his own in test cricket after all.

In the interests of fighting repetition, I have a new angle to share with you re: the levels of England’s incompetence in this series. I hope this will really drill home just how useless we’ve been in all departments.

Despite the public perception that Australia are an improving side, a look back at the players that played in 2010/11 proves otherwise. This current Australia team are, in fact, a significantly worse XI than the lot we hammered three years ago – although, I have to admit, Clarke’s team are playing more to their potential.

One can only assume that if the England team of today met the England team of 2010/11, Strauss’ team would win 5-0 within approximately ten days cricket, with the margin of victory being an innings and six hundred runs in every match (if that were actually possible).

Which brings me back to Andy Flower and the England coaches. The average age of England’s team is about 30. They should be in the prime. Instead, individual performances are regressing alarmingly just at the moment they should be improving (or consolidating at the very least).

Remember, this is a collective failure. We’re not talking about one or two players; we’re talking about the whole side (except Ian Bell). It can’t be coincidence.

If Flower, Gooch and Saker don’t walk at the end of this series, they should be pushed. They are doing an extremely bad job and, India excepted, have been doing a rubbish job for quite some time now – since we were world number one to be precise.

Fresh voices and fresh ideas are needed. Just look what Darren Lehmann has managed to achieve. Unless England’s fortunes miraculously turn around, change should be mandatory.

The only problem is that Ashley Giles is lurking in the background, ready to assume control. And would that actually constitute much of a change? I, for one, don’t think so.