As India compile a handy first innings total on day one of the second Test, Srinivas looks at the career of Ajinkya Rahane – a quality player who hasn’t always lived up to expectations. Feel free to comment on today’s play in the comments too.

There is a lot to like about Ajinkya Rahane. A watchable batsman and an aggressive captain, he does not feel – which is a relief – that his mouth has a whole lot of work to do on the cricket field. His calm leadership and his tide-turning 112 at the MCG during the recently concluded Test series between India and Australia have received a lot of praise from various quarters, and rightly so. As a Rahane fan, though, I am frustrated that the series turned out to be yet another ordinary one for him as a batsman, his second highest score in it being 42.

To anyone who has followed Rahane, the batsman, closely, the fact that his one brilliant century in Australia was beset by a number of insubstantial scores should not have come as a surprise. Rather, it instantiated yet again the kind of inconsistent brilliance that has characterised – and plagued – his Test career thus far.

In 2014, when India won a Test for the first time at Lord’s in many a long year, it was on the back of a sparkling rearguard century in the first innings from Rahane. After that century, however, Rahane’s returns with the bat dwindled even as his team’s performance declined, allowing a fine England side to turn around a 1-0 deficit into a remarkable 3-1 victory.

A few months after the tour of England, India travelled to Australia, where Rahane followed up an impressive 81 in the second Test in Brisbane with a belligerent 147 in the third Test in Melbourne, during which he flat-batted Mitchell Johnson to distraction in a counterattack for the ages. Once again, though, there wasn’t any other score of note from Rahane’s bat during the series.

More recently, Rahane broke a prolonged drought of seventeen Tests without a century by scoring 102 against the West Indies in North Sound in 2019. Between this three-figure score and the MCG 112 mentioned earlier, however, Rahane made just one hundred against South Africa at home, his 115 overshadowed by Rohit Sharma’s 212 in the same innings. Rahane’s problem, to put it in terms of crude numbers, is that only once has he made more than one century in a Test series – when he made hundreds in both innings against South Africa on a Delhi dustbowl in 2015.

Ironically, those brilliant twin hundreds throw into sharp relief the second problem with Rahane’s Test career: his record in India, which may be called unimpressive merely out of politeness. His average of 39.24 at home in fact appears poorer than it is when seen alongside the home averages of Virat Kohli (68.42), Cheteshwar Pujara (59.84) and Rohit Sharma (88.33), his three closest contemporaries in terms of age and experience. Even Ravindra Jadeja, India’s preferred spin-bowling all-rounder in recent times, averages 38 with the bat in India! 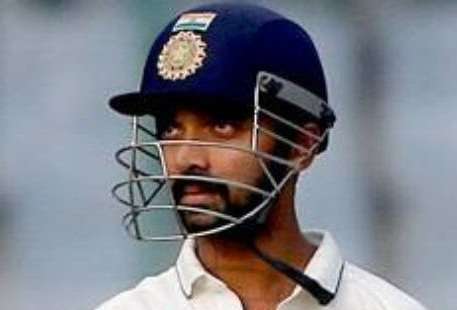 Rahane’s underwhelming returns at home may be partly explained by the view that he plays more ‘not in control’ shots early in an innings than most top-order batsmen. That, combined with the fact that he is shaky against spin in the early part of his innings, is arguably a recipe for failure on typical Indian wickets. The fact that Rahane’s overall average still stands at a respectable 42-plus is therefore a testament to his consistency abroad. In fact, among the current Indian batsmen, his overseas average of 44.44 is second only to the 51.80 boasted by Shubman Gill, who has played just three (albeit tough) Tests.

For his own sake, however, Rahane must get his act together at home immediately, because in a country that turns out fine fair-weather batsmen as a matter of course, his mediocre home record cannot be ignored forever. He also owes it to his team management which, despite being notorious for some of its selection calls, has persisted with him through a number of middling seasons.

Perhaps, the management is still enthralled (as I am) by the memories of Rahane’s first significant knocks in Test cricket: his majestic 96 against South African in Durban, which included an outrageous upper-cut of Dale Steyn for six, and his silken maiden hundred against New Zealand in Wellington (which was upstaged by a match-saving triple hundred by Brendon McCullum). Nor were those knocks flashes in the pan; for, by the time Rahane had played thirty-nine Tests, he had nine centuries to his credit and, with an average in the late forties, was well on his way to becoming one of India’s batting greats.

In the thirty Tests that have followed, however, Rahane has scored just three more centuries – although the fact they have come in the last twelve Tests suggest an upswing in form – and averaged a little under thirty-six runs per innings. His cover drives are still a delight to watch and his defensive strokes, when he meets the ball under his eyes rather than pushing at it, remind one of his class. Unless he starts making big runs more consistently, however, particularly at home, the adage form is temporary, but class is permanent may be reduced to a cliché in his case.