There isn’t a lot going on today so Matthew Sheldon is back to reminisce about one of the finest bowling spells by an England paceman in history. The month was March. The year was 2004. The ground, once again, was Sabina Park. And the bowler in question was the brilliant Steve Harmison …

West Indian cricket is famous for many things. They have been blessed with legendary batting lineups featuring all time greats like Richards, Lara and Greenidge. They have wonderfully passionate supporters – the ever more outrageous Gravy cavorting wildly in the old stands comes to mind.

Then there are the incredible fast bowlers. Take your pick from a host of famous names. For now let’s go with Holding, Roberts, and Marshall. Bowlers who destroyed England with shocking regularity.

For many years England were without a fast bowler who could intimidate and rattle an opposition. The ability to mop up an innings or to inflict pain (physically or on the scoreboard) at the top of an innings are rare skills. The West Indians seemed to breed these players for fun. Now where was an English equivalent?

The quest eventually found Steve Harmison, whose test career was truly peaking when England were on their tour of the West Indies in 2004. The need for speed was great. Harmison had this in abundance. When he was flying he was almost unplayable.

Harmison had a tremendously powerful action, with such smooth timing. A high left arm and powerful chest on delivery. He had the immense height, the ferocity and the rhythm. They were all pieced together during these wonderful test matches.

This tour was a major highlight of Big Steve’s career – and it was a fantastic sight to behold after decades of being on the receiving end. Now we had a deadly paceman of our own to unleash a barrage of lethal attacks.

The success of the second innings at Sabina Park for Harmison was how wonderfully he controlled his length. He did get wickets with the short stuff, and he certainly intimidated with it, but he was also wise to pitch things up – thus regularly snaring wickets in the slips.

With so many moving parts to balance – and at such speed – Harmison had to manage his tremendous frame so well in order to truly fulfil his great potential. Here he was roaring in at his intimidating best, sending lethal leather down to a withering Windies. 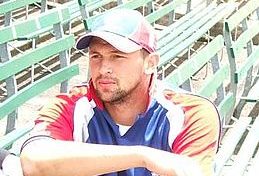 The beauty of his action was how perfectly in sync his movements were. When his timing was just right it appeared effortless. There was a smoothness to Harmison when he was at his best that reminded me of Joel Garner – a man who the West Indies would have loved to have had in their ranks at this time.

Yes, the West Indies were less of a threat than in the past – but Harmison still had excellent batsmen like Chanderpaul, Lara and Sarwan hopping around at the crease throughout the series.

It was a delight to witness the shoe being firmly placed on the other foot at Sabina Park, with an umbrella slip cordon that would have been unthinkable on previous tours when English medium pacers toiled under the baking sun and got flayed to all parts of the Caribbean. Now the tourists revved up the pressure and were relentless. It was a complete role reversal.

How magnificent it was to see the West Indians backing away to square leg to shield themselves from the onslaught. What a sight as players were bounced out.

This was revenge for all those years of pain. Finally England had a bowling attack that could be feared, and a giant figure demolishing the West Indies almost at will.

If all the catches had stuck Harmison could have ended with even better figures than a career best tally of 7-12. But the marker for the series had been laid down and the test match had been as good as won. This was no English attack to pummel around the park for plenty.

Harrison’s sensational bowling ensured the West Indies were skittled for just 47. He then claimed 6-61 in the next test in Trinidad to continue his  path of destruction.

This series was going to be a dogfight for the West Indians. By now however, they had no teeth to retaliate.