The All Elegance XI

Pure class. The following XI is unadulterated, yummy, blissful class. I don’t necessarily care how many runs they scored; this is all about how not how many. In fact, I’d rather bank a pretty twenty scored by one of these stylish cricketers than all 7,000 of Steve Smith’s Test runs.

The following players are / were aesthetic delights – elegant players born to enchant and make you purr in admiration. Sure they occasionally made you want to tear your hair out in frustration – mostly because you wanted the show to go on for just a little longer – but they’ll always have a place in folklore as inimitable cricketing artists.

Yes you might scoff at some of the names, and a couple of them were even found wanting at international level, but the important thing here is that they gave us purists joy. And as for the other players, they are indisputable greats – stylish cricketers that not only played like the face of God of a sunny day but also brought back the bacon on numerous occasions. These legendary players not only emptied bars but also drained the opposition’s will. These guys were artists. And the cricket field was their canvass – all 360 degrees of it.

Anyway, I’ve waxed lyrical and drawn from my well of cliches for long enough. It’s time to reveal our all elegance XI (chosen from players since the mid 1980s when we started watching cricket)… may the Lord bless each and every one of them.

Openers are supposed to be nuggety, dour, stubborn and resilient. Saeed Anwar said b*ll**ks to all that. His batting was about grace, timing, placement, and flamboyance. Remember England’s failed experiment with Moeen Ali as an opener? Had Moeen succeeded it well might have looked a lot like Saeed in his pomp (albeit not quite as good).

You simply couldn’t take your eyes off this bloke. Yes he’d occasionally slash the ball to gully or 4th slip but overall it was worth it. The fact he averaged over 40 in Test cricket in England, opening the batting with such positivity and flair, shows you just how good his hand / eye coordination was.

A somewhat controversial selection, perhaps, but Vaughan was orthodoxy personified. Indeed, his cover drive remains the benchmark by which all emerging players’ cover drives are judged.

Vaughan’s performance down under in 2002-03 remains the outstanding series performance by an England batsman that I’ve ever seen. He picked off one of the best bowling attacks of all time (which included the likes of McGrath, Gillespie, Lee, and Warne) with poise, finesse, and the occasional scintillating pull. People forget that he averaged 45 as a pure opener and over 50 when he wasn’t captain.

This list of stylish cricketers was never going to be complete without good old Lubo. Gower’s batting was gorgeous and as purists we gorged on every morsel. Yes he was occasionally a bit too loose, but when your best trick – the flamboyant drive through the covers on the up – looks so good why wouldn’t you have a go?

Gower’s batting was so stylish and so nonchalant that he seemed on a different planet to his contemporaries. My aforementioned painting analogy fits Lubo better than anyone else. Batting was his art and every stroke of his bat was like a swish of a master painter’s brush. 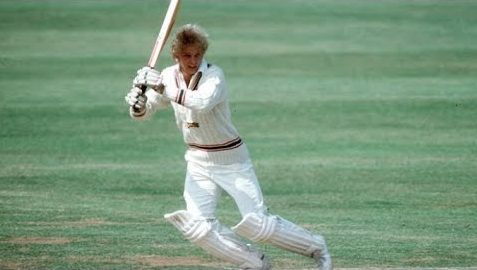 The best batsman of the modern era in my opinion. Yes one could make a fantastic case for Sir Viv or Sachin but Lara wins any tie-break on pure aesthetics. Lara’s exaggerated back-lift, full follow through, dancing feet, and remarkably fast hands were quite simply a joy. He did everything with panache.

The Windies have had so many stylish batsmen but Lara tops the list (in my humble opinion) because he starred in relatively weak teams and had little support. I loved watching him so much that I was desperate to call my daughter Lara. Sadly my pleas fell on deaf ears and my wife, who has a lot more taste than me to be honest, resisted.

I didn’t like Mark Waugh. He was the archetypal gum-chewing Aussie who obviously had no respect for the Poms whatsoever. And who can blame him when we put out attacks like Bicknell, Ilott, Such and Emburey (like we did at Edgbaston in 1993)? Waugh responded with 137 and an unbeaten 62. I swear no batsman has ever made batting in a Test match looks so easy.

Despite rubbing England supporters up the wrong way, Waugh was impossible to hate because his batting was beyond dreamy. He wielded the willow with such natural fluency that every run seemed to tell bowlers “you sweat if you want; this is no sweat for me”.

Although Vikram never quite cracked it at international level – he got too anxious and was moved all over the batting order – his pure natural talent was undeniable. No player on the county circuit has given me more joy and therefore he makes the list as one of TFT’s most stylish cricketers.

Solanki’s back-lift was high (almost like a right-handed Lara), and his wrists were reminiscent of Mohammad Azharruddin (who almost made this team). His driving was debonair, he flicked the ball through the leg-side effortlessly, and he cut and pulled the ball as if wielding a rapier.

I’ll never know how Vik managed to score so many runs with such a flamboyant technique in English conditions – particularly at New Road which is never easy. Had he carved out a career in India (where he was born) he might well have played several Test matches. I often wonder whether he might have played Test cricket for England (thus adding to his 51 ODIs) had he moved to The Oval a few years earlier when he was at his peak.

Name a wicket-keeper batsman more compelling than de Kock? Some might say Adam Gilchrist, of course, but Gilly was more of a bludgeoner and a bully (a ‘hitter’ if you like). Quinton is just as dangerous and destructive but executes the bowlers with a certain elan.

There’s something about attacking batsmen-keepers. So many were inherently stylish cricketers. I might have opted for a graceful gloveman (a pure keeper) like Bob Taylor but this kind of cricketer is sadly a dying breed; therefore it was slim pickings. Still, I don’t think the galleries would object too much to de Kock’s inclusion here.

How does one define an ‘elegant’ bowler? It’s a trickier exercise than identifying stylish batsmen. In this instance I’ve gone for either natural athletes or simply ‘natural bowlers’ – guys who looked like they were born to bowl.

Wasim has to come top of this list. His action was so uncomplicated and he possessed all the tricks in the book. He was quick when he wanted to be too. Whereas the likes of Shoaib Akhtar had to sprint to the crease and put absolutely everything into every delivery, Wasim jogged in off a considerably shorter run and let his naturally fast arm do the talking. Spellbindingly brilliant. 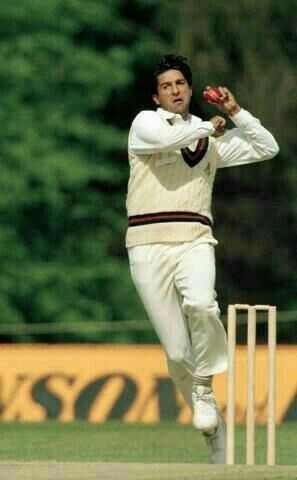 The greatest fast bowler of all time? Ok, some purists might argue that he was a little too open chested to be strictly elegant, but would you say that to his face when he was in his pomp? You’d end up looking like Mike Gatting after he was smashed in the nose by a Marshall bouncer.

Malcolm was a phenomenon pure and simple. His quick feet sped to the wicket, his arm was a whirlwind, and he somehow managed to swing the ball out (as well as in) despite his open chest and angled approach. Basically he was a genius.

Forget the beach bum stuff. Forget the bleached blonde hair and the occasionally eccentric behaviour. Just think, purely, about Warne the bowler. Has there ever been a better leg-spinner or one who executed his craft so adeptly?

Bowling leggies is a complicated craft but Warnie made it look so simple. He took just a few steps to the crease, from an orthodox approach, and the ball came out fizzing out of his hand like a bouncing bomb. His variations were utterly beguiling and he made the world fall in love with leg-spin again. If kids all over the world want to bowl like you then you’re clearly doing something special.

White lightning. Allan Donald was the quintessential nasty fast bowler. He was all brawn and aggression. But he also had a fantastic action. He bound to the wicket (feet thudding as he accelerated towards the umpire) he leapt in the air athletically (arms coiled like a cobra ready to attack), and then unleashed thunderbolt after thunderbolt with a violent follow through that sometimes took him three-quarters the way down the wicket – right into the batsman’s eye-line and easily close enough to have a ‘private word’ or two.

I first saw Donald bowl live at New Road before South Africa’s readmission. The Warwickshire keeper, Keith Piper, was standing closer to the sight-screen than the wicket. I’ll never forget the thud the ball made when it hit his gloves.

Everyone loves Mo. Why? Because he’s an entertainer and one of the most stylish cricketers in the world. There’s always something happening when he’s at the wicket. This might occasionally involve the ball crashing into his stumps, catching practice for the slips, or an ill-advised hook that falls into the lap of long leg. However, it often ends with one of the most captivating half-centuries you’ll ever see in a Test match. After all Mo has scored 14 of these (not to mention his five hundreds).

If the word ‘languid’ wasn’t invented for David Gower then it must have been invented for Moeen. His driving through the off-side, often on the up with that high back-lift, is pure poetry. Will we ever see him in an England Test match again? The pragmatist in me says no but my heart says ‘yes yes, yes’.

Who would you nominate for your all-elegance XI? There are so many stylish cricketers to choose from.