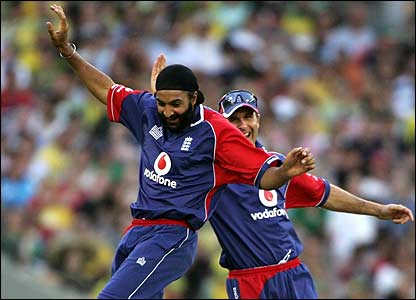 Imagine this. It’s the World Cup in Australia in 1992. The pitches are hard. Fast bowling is likely to be the key factor – yet the Windies omit Courtney Walsh from their squad because he can’t bat or field. Instead they select some Kieron Pollard clone because he’s more likely to score a few runs down the order. Madness?

As we all know, the World Cup in 2011 is in India, Sri Lanka and Bangladesh. Spin bowling is likely to be the determining factor. So why aren’t England taking Monty Panesar – who is, other than Graeme Swann, our only international class spinner?

Michael Yardy and James Tredwell have never let England down, but logic tells us that wickets are the best way to slow down the run rate and win matches. Therefore, we should be picking our best bowlers.

Would we consider picking Chris Woakes ahead of Jimmy Anderson because he’s a better batsman? Absolutely not. The same logic should apply to our spinners.

Obviously a batting team can look a bit lightweight if it’s got four number elevens, but this simply wouldn’t be the case if England picked Monty. Broad, Bresnan and Swann are all useful batsmen that would balance the side.

Consequently we can afford to choose a second specialist spinner who is likely to take wickets at crucial times. With all due respect to Yardy and Tredwell, they’re hardly likely to strike fear into the opposition. They’re more likely to be milked for six an over.

Would Sri Lanka leave out Murali or Mendis because they can’t bat? I think not. What’s more, when Australia picked Steve Smith ahead of the likes of Nathan Hauritz and Usman Khawaja during the Ashes we all laughed at them. Picking a bits and pieces cricketer ahead of a quality specialist rarely works.

Unfortunately however, our selectors seem determined to stick with spinners who can bat. Fielding doesn’t seem to come into it as neither Yardy nor Tredwell are Jonty Rhodes. Besides, Monty has improved his fielding beyond all recognition in recent months. He’ll never be a panther, but he’s no longer a complete camel.

Check out the match-day twelve below. It’s amazing how much better the bowling attack looks without the part-timers. With Anderson, Broad, Bresnan, Swann and Monty, there’s no weak link. Tell us what you think?