Matthew Sheldon is back with another precious memory from the nostalgia vault. This time it’s the infamous Shane Warne Gatting ball from the 1993 Ashes. Has there ever been a more perfect delivery?

It is often said that people can remember where they were during moments of particular notoriety.

In the case of Shane Warne’s first ball to Mike Gatting at Old Trafford in 1993 the question might read ‘Where were you when Test match cricket changed your life?’

That answer for me and probably many other people is – I was watching the game with my Dad, our eyes wide open in total shock, our mouths agape as if preparing to eat a thousand Jaffa Cakes at once (other snacks are available.) This was one of the greatest cricketing moments of the 20th century. We couldn’t believe what we had seen.

Yes, there have been deliveries that have turned more prodigiously, however the dramatic timing of the delivery – and everything that happened subsequently – is what makes the Warne Gatting ball stand out as a thing of incredible beauty and notoriety. 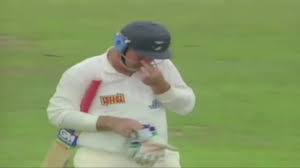 Spin was underutilised in Ashes series for many years. Leg spin in the ashes was almost dead. At this time of my life I hadn’t seen a decent leg spinner that wasn’t from the sub-continent. I had seen Michael Atherton twirl his arm in a Lancashire 2nd XI match, but I suppose that doesn’t really count.

Tales of spin years gone by were often referenced so fondly and eloquently by the great Richie Benaud in the commentary box. Leg spin as an artform however, felt a little like it was for the old timers. It was as if this skill had developed a circus sideshow quality. Some light comedy relief from a chancer at the end of a long day in the field in Rawlpindi when the opposition were 600-2, I mean ‘Who on earth bowls a Chinaman for goodness sake?’ I thought.

After a reasonable start for England that day (in reply to just under 300 from Australia) Allan Border turned to his next bowling option. Shane Warne didn’t really look like any cricketer I had ever seen before. He must’ve been nervous, but he seemed to have an air of magic about him even before he bowled. With his flame hair and his bright white war paint Warne was going into battle using weapons seldom seen for half a century of Ashes cricket.

He casually walked to the crease, and I do mean walked. Gatting was reasonably well set. This had the early signs of a thoroughly gripping Ashes contest. As the ball drifted across the cool Manchester air, there was a little drift that suggested Warne had got some decent revolutions on the ball. Revolution being the appropriate word.

Gatting jutted out a tentative pad (he didn’t thrust out the pad to meet it where it pitched which may have been his downfall – but stretching with dexterity wasn’t really Gatting’s forte) as the ball was certainly going to pitch outside leg stump and could be nullified with the pad. Gatting was possibly thinking that if this was going to be the angle of attack then this young spinner could be milked for the afternoon. After a shapely arc the ball pitched in some light rough.

It then took off like a firecracker. It exploded. It seemed to gain considerable pace. It veered off the straight as if struck by lightning. Shooting ferociously across the perilous Gatting, the ball tore into his off stump at a rate of knots. It sumptuously removed the bails with a death rattle that conversely breathed new life into Test match cricket.

The Warne Gatting ball was nothing short of spectacular. All the Australians knew it as they sprang for joy at the site of the dislodged bails. Ian Healey almost broke the world high jump record with his gloves aloft as he celebrated wildly.

The joyous celebrations were in stark contrast to Gatting who looked profoundly confused as his face contorted. He waited. Had Healey tried to stump him? No. It dawned on him that this was the end of his innings. It was also the beginning of something very special. English supporters would have to get used to the frenzied Aussie celebrations (Warne took 9 wickets in the match, and the Man of the Match award) for the foreseeable future.

Warne’s incredible gifts were there to see from the start of his first spell in Ashes cricket. His method of bowling and his thought process meant that his fantastic cricketing brain was always whirring. Warne’s brain was his finest cricketing attribute. His understanding of when to bowl which delivery to which batsman was phenomenal. He has subsequently talked about how this delivery was one of good luck rather than precise judgement.

Gatting trudged off unaware that he had just been involved in a moment of magic that many would refer to as the ball of the century.

I turned to my Dad after a few replays who calmly said – ‘It hit a bump, fancy a brew?’