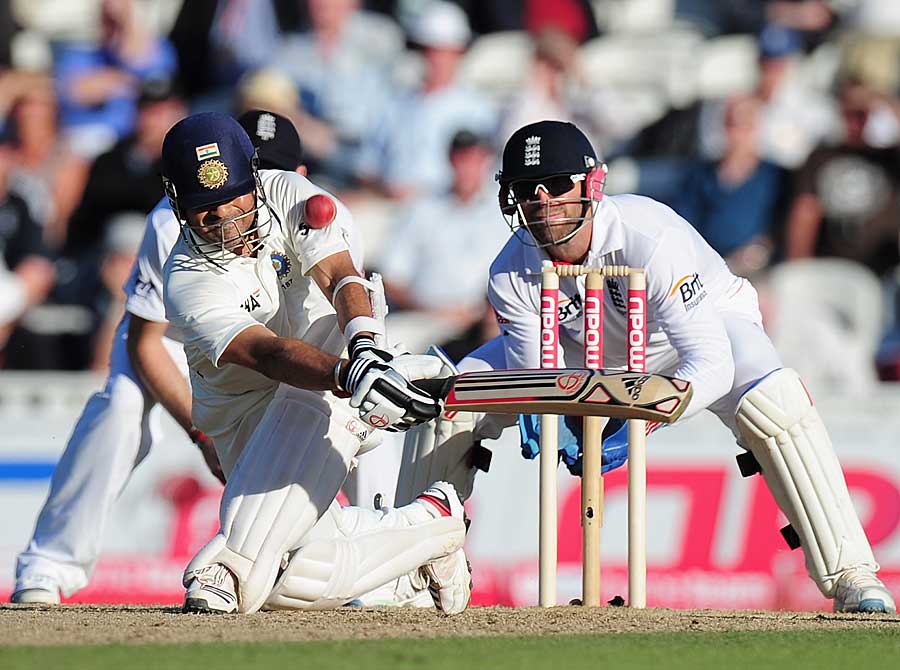 There are two main stories from today’s play: England’s extremely disciplined performance in the field, and Sachin Tendulkar’s innings of 76. And there are two ways of looking at the second story: Sachin either justified his place by scoring some important runs, or the nature of that innings suggested the little maestro should have retired a year ago.

I’m one of those people who like to see the great batsmen go out on a high. I hate seeing them cling on for grim death. When Raul Dravid retired he was still much admired. Ok, so he’d just had a tough tour of Australia, but not long before that he was singlehandedly resisting England’s attack and sparing India’s blushes.

Although Sachin’s innings dug India out of a hole, it was quite sad to watch. He looked pretty much like a tailender with a proper batsman’s brain. The application and mental toughness was there, but the old skills looked sadly lacking:

He played and missed more than Devon Malcolm in a blindfold (when I say missed, he missed by a country mile) and his scoring options were akin to Jimmy Anderson’s: basically behind square on the offside deflecting the ball through the slips and gully.

Tendulkar only played one shot of genuine quality: a tasty drive through extra cover. It came after he’d been at the crease for over three hours. It took him ages to find his feet. Before that he was extremely scratchy. Sometimes, I feel he has declined more than Ricky Ponting.

Having said that, at least it took a good ball to get him out; Tendulkar batted with great heart and determination. He put his teammates to shame really. The dismissals of Gambhir and Yuvraj were particularly soft.

The bottom line is that England are in a highly promising position. This is a good pitch. It’s different to the turner in Mumbai. A total of 400 is the minimum a batting side would want.

If England can take the remaining wickets tomorrow quite cheaply, and topple India for about 330, we’ll have a good chance to establish a decisive first innings lead.

However, perhaps we’re getting ahead of ourselves. Dhoni loves batting at Eden Gardens. He makes hundreds here for fun. Meanwhile, there’s no escaping the fact that we’ve over reliant on Cook, Pietersen and Prior for runs. It’s about time Trott, Bell, Compton and Patel pulled their weight.

Talking of Patel, does anyone know why we’re persisting with him? You get the feeling this is simply intransigence from an England management team who have always been a tad stubborn.

Patel did not bowl a single ball today – despite the fact that Swann was ill and could only manage fourteen overs. If Patel isn’t going to bowl in these circumstances then he’s never going to bowl.

One must assume, therefore, that Samit is being picked as a specialist batsman. Does this sound sensible to you? Is Patel really a better batsman than Morgan and Root? Does the Pope live in Bethnal Green?

At least Finn was picked ahead of Broad however. Although he didn’t take a wicket, he bowled well and troubled most of the Indian batsmen. Finn was certainly a better foil for Anderson; Jimmy picked up three wickets and managed to extract some reverse swing for the first time this series.

We should also give an honourable mention to Monty. Because Swann had a touch of Delhi belly and kept leaving the field – presumably to damage the Doulton – the Montster got through 35 overs and took 2-75. All the Indian batsmen treated him with respect. Well bowled Mr Panesar.