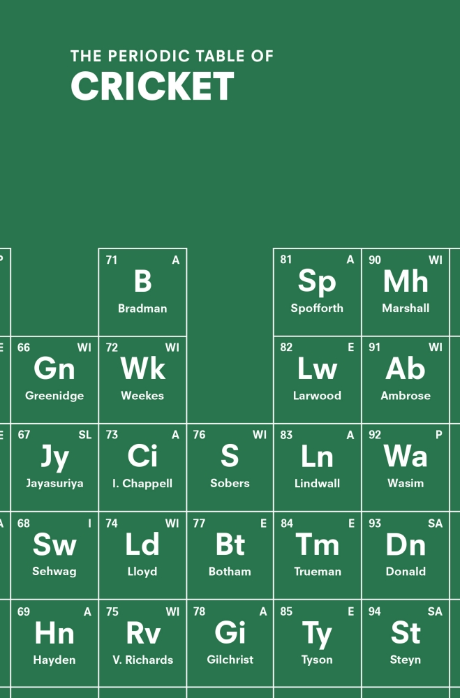 As we wait for the 3rd test to begin – more about that tomorrow – I thought I’d treat you to a quick book review. When I was sunning myself on holiday a couple of weeks ago, I was able to read John Stern’s enjoyable The Periodic Table Of Cricket. I found that it goes quite nicely with a glass of crisp white.

As the name suggests, it’s the periodic table of elements rewritten for a cricket audience. Instead of H for Hydrogen and Li for Lithium, you’ve got H for Hobbs and Li for Lillee. Each element / player has a small bio that summarises their career in a whimsical fashion and explains why they’ve been included in their respective spot.

The table is broken down into ‘Defenders and Pragmatists’ like Sunil Gavaskar and Alastair Cook; then there’s ‘Stylists & Entertainers’ such as David Gower and Brian Lara; next up are ‘Mavericks & Rebels’ which includes Kevin Pietersen, Brian Close and those of a similar ilk; followed by ‘Aggressors and Enforcers’ which is dedicated to the Sir Ians and Sir Vivs of this workd. The final category is ‘Innovators and Pioneers’ which is tribute to players like Benaud, D’Oliveira and Murali who pushed boundaries during their career.

One of the most interesting aspects of the book is that you can endlessly debate which categories different players should belong to. Geoff Boycott is labelled as a defender and pragmatist yet he could’ve easily been included in the rebels chapter instead. Meanwhile, Mike Brearley is categorised as a maverick when I’ve always seen him as more of an innovator when it came to psychology and man management.

The author, by the way, is aware of the imperfections (or perhaps I should say the subjectivity) of his idea but insists that debating his selections and categories is all part of the fun. And he’s most definitely right. After all, isn’t debate what cricket’s all about?!

I also enjoyed the book as an exercise in nostalgia. The player bios recall a player’s greatest moments without going into too much detail. Each description is just a snapshot really but Stern manages to capture what each player was all about quite effectively in just three or four paragraphs.

If you’re looking for a quick cricket fix, but like me you don’t always have time to sit down and read a book for long periods, The Periodic Table will be a worthy addition to your coffee table. Personally I like to pick it up, read a few bios when the kids aren’t biting my ankles, and then come back to it when I’ve got another few spare minutes.

By the way, if the name John Stern sounds familiar it’s because he’s is the editor-at-large over at All Out Cricket. He also writes for The Times and used to edit The Cricketer. He’s no relation to Stern John, who is my favourite former Derby, Southampton and Nottingham Forest footballer. I thought I’d just clear that one up.

The Periodic Table Of Cricket is published by Ebury Press and costs £9.99.