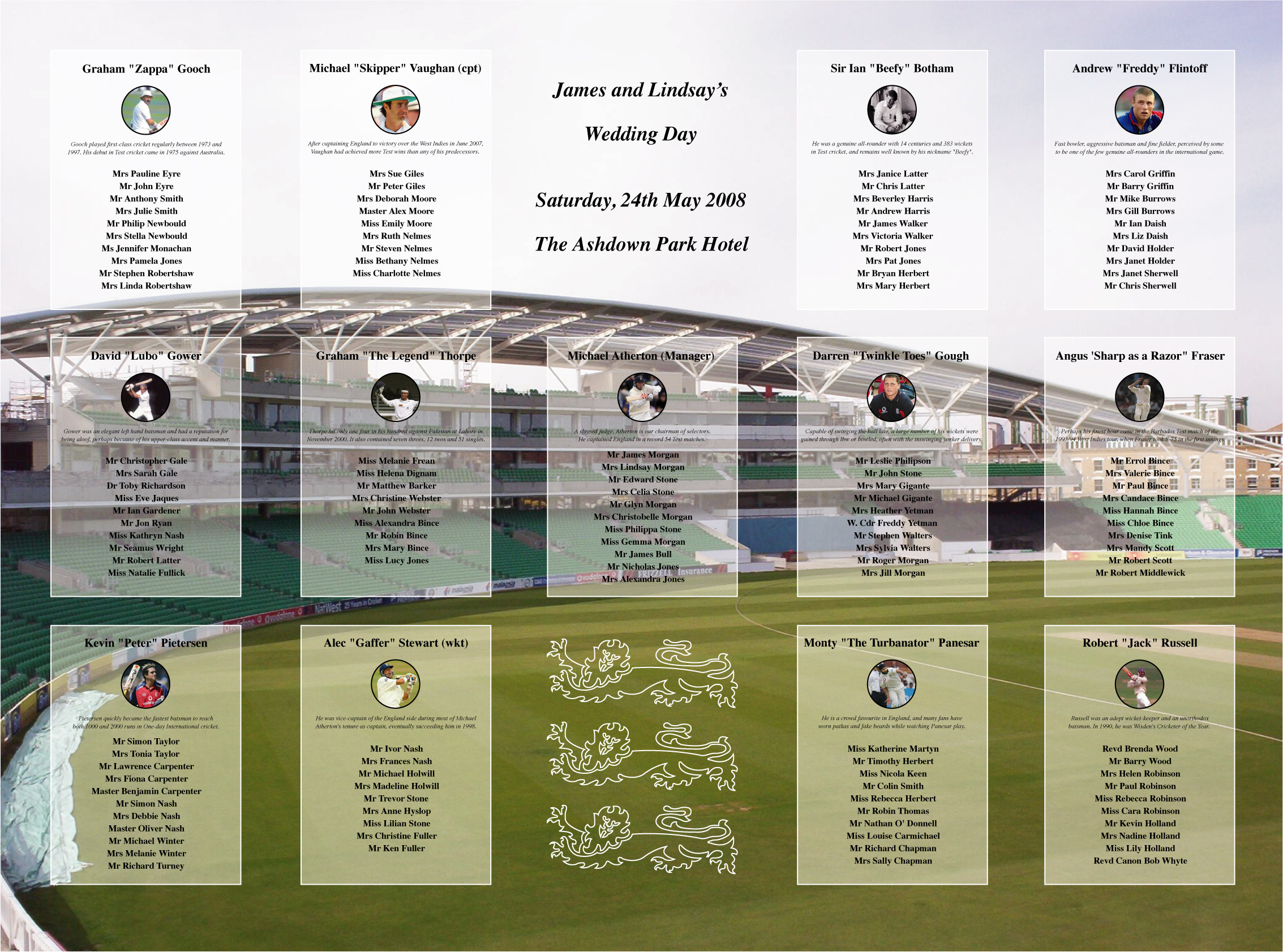 Today I feel like taking a trip down memory lane. The papers have been full of Ashes analysis, so I thought I’d try something completely different.

Let’s distance ourselves from England’s ‘historic Ashes win’ (© Sky) and look back further than two years ago. Indeed, let’s look back at test cricket since the mid-1980s, which was the time that cricket caught my imagination and captured my soul.

Regular readers know that I love nothing more than coming up with ‘all time XIs’. It’s great for discussion and it’s fun. We’ve all done it in the pub with friends, and I bet most of you can reel off your personal all-time England XI in an instant.

I used mine for the table plan at my wedding seven years ago (pictured above). Knowing what I know now, I’d only make two changes: Swann for Monty and Anderson and Fraser. I wrote a post about this a couple of years ago.

However, one thing I’ve never done at TFT before is name my all time World XI. This is the side I’d like represent Earth against the Martians in the Interstellar Test Championship – shown exclusively live on Sky of course.

Picking this side is a much harder task. There’s an embarrassment of riches to choose from – particularly when it comes to the bowlers. How on earth is one supposed to choose between Richard Hadlee and Glenn McGrath?

The batting is a lot more straightforward in my opinion – there are two players nobody will argue with – although choosing the openers and a captain was tricky.

Anyway, after racking my brains and receiving therapy for selective amnesia – I’d wiped several of these players from my memory due to the trauma they’ve caused England over the years – I’ve come up with the following team.

You’ll see I’ve somewhat bottled it by picking twelve players. I know, I know, it’s a bit of a copout, but we don’t know what the pitches are like on Mars.

The pictures beamed back from the Mars Rover suggest the surface might be a little dusty – in which case two spinners might be needed.

Sunil Gavaskar – I only caught the end of his career but his record speaks for itself. He scored thirteen test hundreds against the Windies. Averaging 65 against the likes of Holding and Andy Roberts isn’t just good, it’s jaw dropping.

Graham Gooch – A slightly controversial selection perhaps, but Gooch played the best test innings I’ve ever seen against the Windies at Headingley in 1991. He made 154 and carried his bat. Guys like Hayden and Sehwag played in an era when runs were easier to come by.

Sachin Tendulkar – Anyone got a problem with this pick? Didn’t think so.

Brian Lara – The best batsman I’ve ever seen. He was the best to watch too.

Steve Waugh (captain) – Hard as nails and obsessed with winning. Gets the nod over Alan Border, just.

Jacques Kallis – You’re a bowler. You’ve finally got rid of Sachin and Brian. You look up and see Kallis strolling to the wicket at fourth drop. Bugger.

Adam Gilchrist – The perfect man to come in when Earth are 400-5.

Richard Hadlee – Gets the nod over McGrath, but it was bloody close. Hadlee’s batting gives the squad a little extra flexibility.

Wasim Akram – Skiddy, left-arm, and swung it prodigiously. The perfect foil for the other bowlers. Bats a bit too.

Shane Warne – It was either Warney or Murali – so I cheated and picked both.

Curtly Ambrose – Of all the Windies quicks I saw, Ambrose was the most consistent. He was quick, relentless, hit the bat hard, and rarely bowled a bad ball.

So what do you reckon? Not too many weaknesses there. I’m sure you all have your personal favourites though. Feel free to share ….