Will he be missed? He certainly will, Charles. Today is a really sad day. Like many people I feel absolutely gutted at the loss of Bob Willis. He was loved by all and he’s left us all far too soon.

Bob was one of the few cricket pundits who was just like us supporters. He was candid and critical because he cared so much about the team. And, just like us, he spoke his mind and didn’t particularly care if his passion overflowed. In an era when too many pundits and commentators seem too close to the players, and too afraid to criticise, Bob Willis was real. You knew he was giving it to you straight.

Yes there were times when Bob was probably a bit too harsh on certain players. I’d be interested to know how the likes of Keaton Jennings felt after a Bob roasting on Sky. However, this only made him more like us. As supporters we all get carried away now and again. Watching Bob rant on the television, just like we do on the sofa when England collapse after a succession of crap shots, was cathartic. If there weren’t any positives then Bob wouldn’t waste time trying to find any.

Bob also had an uncanny knack of summing up the prevailing mood in just a few words. They might not have been clever words that would win him a writer’s job at a prestigious broadsheet but somehow they always hit home: “A load of rubbish, Charles”, “abject and pathetic, Charles”, “they’re bird-brains, Charles”, “these guys cannot bat, it’s as simple as that, Charles”. Go get ’em, Bob.

By keeping it simple, and eschewing all the usual cliches and paralysis through over-analysis, Bob also managed to be remarkably incisive. He instinctively knew when a particular player couldn’t cut the mustard at international level and he was rarely wide of the mark. But when someone did occasionally prove him wrong, or the team produced an unexpected comeback after he’d written them off, he wasn’t afraid to be gracious and gobble up his humble pie. 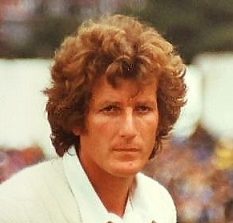 Bob’s passing also seems to underline the passing of the commentary baton from one generation to the next. With Sky pensioning off David Gower and Ian Botham (wrongly in my opinion) and replacing them with younger blokey types like Rob Key and Ian Ward, Bob Willis’s continued role on The Debate (formerly The Verdict) felt reassuring. The decor might have been changing but one hoped that Grumpy Bob would remain part of the furniture for a long time to come.

Sadly, however, this wasn’t meant to be. Although Bob’s colleague Charles Colville tried to reassure us last week that his absence from our screens was down to a “small operation” his condition was obviously far more serious than that. It was a shock to hear he’d been suffering from Thyroid cancer. Sky’s cricket coverage simply won’t be the same again.

It’s worth remembering, of course, that Bob Willis had a tremendous career as a player before making the switch to media. Unfortunately I didn’t see much of him live – he played his last test in 1984 which was a year or two before I started watching cricket on the BBC as a kid – but he was clearly the exceptional England fast bowler of his generation.

Indeed, one could argue that Bob Willis (statistically at very least) was the best pace bowler we’ve had in the last half century: 325 wickets at an average of 25 and a strike rate of 53. Only Jimmy Anderson comes close. How England could use a young Willis now.

On a personal level I will miss him just as much as I miss Richie Benaud. Although I never met Bob in person, I used to see him around town in Wimbledon when I lived there during my twenties and thirties. What’s more, as a fellow Bob Dylan fan, I always saw him as a kindred spirit.

Perhaps it’s fitting, therefore, that I end this tribute by quoting the most influential singer-songwriter of the 1960s.

“When the storm clouds gather ’round you, and heavy rains descend,

Just remember that death is not the end.”