‘Oh well’. It’s funny how reactions to ODI defeats are so much milder than Test disasters. Had this been a 5-day game we’d probably all be calling for blood. ‘Useless twonks’ etc.

This is nothing new, of course. ODIs outside of World Cups don’t really matter much. The players might whisper it quietly but I bet they don’t particularly care either. I imagine only those playing for their places or white ball specialists like Eoin Morgan give a hoot or two. It all feels a bit after the Lord Mayor’s show. The Test series was clearly the main event.

However, having said all that, no professional sportsman likes to lose. And they do have pride in their performances too; therefore England will be a bit disappointed with their performance in the first game of the series. It was a bit lacklustre all round really. It certainly wasn’t what you’d expect from recently crowned world champions.

So where did it all go wrong? It all looked predictably rosy when England reached 50 without loss. But there was soon a flurry of wickets that put us on the back foot. And when Root ran himself out, and Morgan poked one to slip, there weren’t many experienced players to dig us out of a hole. Stokes and Buttler, of course, weren’t playing in this game.

Although I was critical of Denly’s inclusion – Dawid Malan is a class above Denly as a white ball batsman at both international and domestic level – thank heavens Joe was playing. He steadied the ship alongside the admirable Chris Woakes and guided us to a semi respectable total. Denly even managed to accelerate towards the end – one in the eye for those who doubted his ability to play expansively during the Tests. 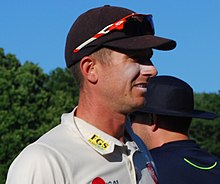 Unfortunately, however, a score barely north of 250 was never realistically going to be enough. You can only defend mediocre totals these days if it’s a particularly tricky pitch or your bowlers take regular wickets. Unfortunately England’s attack in this game wasn’t particularly equipped for the latter.

It’s hard to criticise the individual performances of Woakes (who bowled tidily), the two Currans, Chris Jordan, or Matt Parkinson. However, none of them are really wicket takers. Without Wood, Archer and Stokes our lineup looked rather popgun. I think Parky showed potential, and the others are decent thinking bowlers, but they’re rarely going to blow teams away.

The unfortunate result is that England are now one down in the series and they’ve lost their first game as World Cup winners. It’s a good thing, therefore, that nobody will remember this game (let alone care about it) in a few weeks’ time.

Unless something sensational happens in an ODI they all blend into one over time. I can barely remember what happened in the Pakistan series before the World Cup. In fact, I can’t even say for certain that the opposition was Pakistan. All I remember is that Jofra Archer made his debut. I couldn’t tell you the score.

If this was a boxing match, the ref might well have stopped the contest at Port Elizabeth. After all, this series stopped being just that – a contest – quite a long time ago. However, the struggling side gets no such respite in cricket. There’s a duty to fulfil the fixtures. And therefore South Africa’s humiliation – or perhaps ’emasculation’ might be a better word – continues to be played out in a very public manner. No wonder the local...

Read on31 comments
The Full Toss