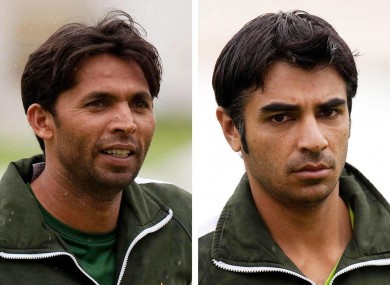 The game is up. According to the jury in the spot-fixing trial, Salman Butt and Mohammad Asif were telling porkies when they denied any wrongdoing at Lord’s last year. They tried blaming it all on their teenage accomplice, Mohammad Amir, and at one point in the trial they even tried to pin it on each other (there’s nothing like trying to screw over your friends eh), but eventually their pleas fell on deaf ears. The judge will decide today whether they go to prison – the most likely eventuality. Presumably, Amir will get a more lenient sentence for owning up. It seems that honesty was the best policy after all.

Yesterday’s guilty verdicts predictably got all the attention, but the trial has actually thrown up more questions than answers – the main one being, ‘is this the tip of the iceberg’? The text messages recovered from Mazhar Majeed’s phone implicate other leading Pakistani players, and suggest that several matches on their tour of England were tainted. The ICC, now armed with a plethora of additional documentation, has already launched fresh investigations. Who knows where this one will lead.

Observers should treat the prosecution’s accusations with a pinch of salt, as the only corruption confirmed by the jury were the specific charges against Butt and Asif, but a number of further allegations were made in court – some of which are quite frankly astounding.

The prosecution contextualised the no-balls as part of a wider web of corruption within the sport. At one point it was alleged that Pakistan players deliberately played badly in order to get Shahid Afridi, the former captain, sacked. The goal, according to the prosecution, was for Salman Butt to become captain in all forms of the game – a move which would create more money earning opportunities for corrupt members of the side. If true, this would cast doubt on Pakistan’s performances over a period of time. It’s enough to make Lord Harris, and the other pioneers of our great sport, turn in their graves.

Although yesterday’s verdicts related to spot-fixing, not the more serious crime of match-fixing, a sport’s popularity depends on spectators believing that the spectacle is authentic. Once doubt has been cast on certain aspects of play, and fans start wondering whether no balls are genuine, it won’t be long before they wonder whether a catch was dropped on purpose, or whether a batsman played out a maiden over to satisfy the whim of a corrupt bookmaker. Indeed, Majeed also allegedly tried to influence the number of runs scored during specific periods of play. What other plans have corrupt bookmakers hatched?

Cricketing luminaries have expressed hope that harsh sentences for Butt, Asif and Amir will send out a strong message and finally knock corruption on its head. If only it was that simple. For starters, this trial is only likely to curtail further corruption in England. It was only the creativity of News of the World journalists, whose sophisticated sting operation fooled a desperate agent up to his eyeballs in debt, which brought these issues to light. Corrupt agents and bookmakers will be more careful in the future. Furthermore, are other countries capable of investigating bent cricketers, gathering the evidence, and then prosecuting them successfully? The evidence in the Butt and Asif trial was unprecedented. Who knows whether a successful prosecution will ever be repeated?

The problem, of course, is how the authorities can control an underground betting industry that’s reputedly worth an estimated fifty billion dollars. Wherever there are huge amounts of money, corruption often follows. There will always be people greedy enough, or desperate enough, to be tempted by illicit money making opportunities. It’s important to remember that cricket is not the only sport affected by cheating and corruption. There have been numerous drug taking scandals in athletics, whilst FIFA is constantly embroiled in various scandals.

In some parts of the world, corrupt payments are a way of life – they grease the wheels and are often an effective way to get things done. It will take more to eradicate corruption in cricket than sending a handful of players to jail. The culture of countries will need to change first, and the gambling industry will have to be brought under control. I don’t see this happening in the short or medium term future, do you?

Making an example of Butt, Asif and Amir won’t do any harm – it’s bound to have a positive effect of sorts – but this trial is unlikely to be the watershed that many former players hope it will be. This isn’t what people want to hear, but it’s the truth.