You’re a professional cricketer whose playing career has finally come to an end. What do you do? Cricket is probably all that you’ve known. Your A-levels are a distant memory. And even if you went to university that second class history degree doesn’t exactly make you a hot commodity in the jobs market. The prospect of finding gainful employment can be a scary one.

This is where it pays to think creatively. You’ve spent years playing on the box and wearing a box, so now it’s time to think outside the box to avoid having to sleep in one.  Not everyone gets offered a cushy job in the media – Mike Atherton (cough), Nasser Hussain (cough), Jonathan Agnew (cough) – so you have to look deep in your soul to identify and then harness latent talents.

The following former cricketing heroes did exactly that. And more power to their elbows for doing so.

Teaching is quite a common pursuit for former cricketers. Martin Bicknell is Director of Cricket at Charterhouse School, Ashes hero Simon Jones is coaching at the Cathedral School in Cardiff, and my old schoolmate and former Gloucestershire all-rounder Mark Hardinges is a house master at Malvern College.

However, the benchmark setter here is undoubtedly Zimbabwe’s Bryan Strang. Rather than teaching conventional subjects, Bryan teaches yoga. We love a good Yoga Yoda on TFT.

Cricket and music go together like dreadlocks and holidays. Indeed, a number of cricketers including Mark Butcher have recorded albums worth listening to. However, nobody has done it with quite the panache of Ambrose and Olonga – even though their contributions have come at very contrasting ends of the music spectrum.

Ambrose pursued his passion for music almost immediately after hanging up his bowling boots. He initially joined a band with perhaps the coolest name since Country Joe And The Fish. Sadly I never saw The Big Bad Dread And The Bald Head but I’d wager they were completely awesome. Curtly subsequently joined reggae band Spirited in 2011 and hasn’t looked back. He’s the tallest and meanest bass player in the world.

Well spoken Henry is a completely different kettle of fish. He’s a classical singing machine who recorded his first album Aurelia back in 2006. Last year he appeared on the Australian version of The Voice and sang Skyfall (the bond theme) alongside some rapper called Denzel. Henry obviously stole the show and looked (and sounded) a lot cooler than the Eminem wannabe he was performing with. Check it out below.

They say that comedy is the new rock and roll. They might be right. But poker comes a close second. Several cricketers have attempted to carve out a living this way from Ed Giddins, who has won close to £100k in his career, and more surprisingly Harry Gurney. Not many people know this but Gurney was a sponsored professional for a few months in 2008 after he left Leicestershire.

However, Giddins and Gurney are small fry compared to MS Dhoni and Shane Warne. We all know about Warne’s penchant for the game but Dhoni recently signed up to become a PokerStars ambassador. He will join professional player Muskan Sethi as a representative of the brand for the Indian market. I’m sure MS will be quids in whatever luck he encounters on the tables.

Being captain of the national cricket team brings with it a certain status in Pakistan. But Imran wasn’t content with this. Oh no. He wanted to control the whole country instead. And naturally, being a born winner, he eventually achieved his goal – although I don’t envy him at the current time. Handling the Pakistani military in the middle of a global pandemic is even tougher than dealing with the cricket media.

Interestingly enough, Imran wasn’t the first former cricket to get involved in politics. Others include Learie Constantine, or perhaps I should say Sir Learie Constantine, who had a long and distinguished political career and was instrumental in the appointment of the Wests Indies’ first black captain. Constantine became party chairman of the People’s National Movement in Trinidad, and became Minister of Communications, Works and Utilities. He later became Trinidad and Tobago’s first High Commissioner in London.

I should also point out that Alastair Cook is destined to become UK prime minister one day. He just doesn’t know it yet. Andrew Strauss may get there first though. 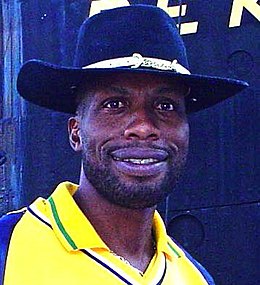 The tallest and coolest bass player ever.

Remember him? Once the future of English wicket keeping and pinch hitting, Kieswetter suffered a horrific injury while batting against Northants in 2013. He broke his nose, damaged his eye socket, hurt his cheekbone, and ended up in hospital wrapped in more bandages than an Egyptian mummy. Retirement soon followed.

One thing the injury didn’t take away from Kieswetter, however, was his brilliant hand eye coordination. So he turned to another summer sport that’s just as graceful but not quite so dangerous – golf.

Although Kieswetter will never be Tiger Woods – he can actually keep his snake in its cage – he managed to turn professional in 2017 and finished a creditable 38th in the Dubai Creek Open. He’s also received lessons from Nick Faldo and Ernie Els’ mentor David Leadbetter.

Remember Syd? He was extraordinarily lovable for one of the fastest and most fearsome pacemen on the circuit. What a shame that a horrific injury suffered while on England duty in New Zealand finished his career prematurely.

A character as exuberant as Syd was never going to end up with a mundane life though. He ultimately took up body building, a pursuit his large frame was ideally suited to, and was named ‘Best In The West’ of England (in the over 40s category) in 2014. How brilliant that a man who’s fragile knee prevented him from fulfilling his potential in cricket now has one of the buffest bodies in the business.

Freddie has found a niche in the non-cricketing media and now co-hosts Top Gear. He’s also hosted Australian Ninja Warrior – yes, this is a real show – and enjoyed a stint in the boxing ring a few years back. Amazingly Flintoff also won the Australian version of I’m A Celebrity Get Me Out Of Here! which sadly remains the only thing he’s ever won down under.