I didn’t manage to write a report for day 1 as I’ve been irritatingly sick this Christmas. I’ve had the lurgy from hell and it just won’t go away. Maybe I’ve come out in sympathy for Pope, Leach and the others victims of the Benochi Belly?

However, had I been match fit enough to put a few words together, I might have said something like this: “five seamers? FIVE bloody seamers? Win the toss and bowl? WFT? Have Joe Root and Chris Silverwood lost any remaining semblance of sanity?

It’s all so frustrating. Imagine my initial disgust when, from my sick bed, I saw the name ‘Bairstow’ inked in at number 6 rather than Pope. I was having palpitations until I eventually realised that the latter was a late victim of the bug sweeping the England camp. Although I bet England were secretly itching to get Jonny back in the side anyway.

My thoughts at the end of day 2 are that South Africa are comfortably ahead. A chase of 200 would’ve been doable (albeit not a forgone conclusion) but I fear that 250 or, god forbid 300, will be too much for our balsa wood brittle batting line up.

So where did it all go wrong? Inserting the opposition and then bowling poorly is the obvious place to start. It was a really curious decision considering the illness suffered by Broad, Archer, and Stokes. Surely Root should’ve given them as much time as possible to recuperate? Asking them to bowl in sweltering conditions was beyond curious – as was the composition of the team England picked.

I’ve said it before and I’ll bloody well say it again. Five seamers can rarely do what four can’t. I can understand the move if (as some reported) England knew Stokes would be limited with the ball on day one, but it was still a daft decision. England’s argument that spinners rarely play a role at SuperSport park was undermined the moment that the home side, who know conditions best, included Maharaj.

England may still win this game – as we saw at Leeds last summer miracles do happen – but the way we’ve approached this game has made the task so much harder. I’m afraid I have little faith in Root and Silverwood’s capacity to make sensible decisions at this point. As a supporter this isn’t a nice place to be.

Although some thought that the teams were neck and neck after day one, I always thought the Biltong munchers has their noses in front. The fact that Gooch and Ramprakash, who must be the least impartial duo ever assembled on Sky’s The Debate, didn’t seem particularly positive last night said it all really.

Gooch tried to argue that skippers generally want to bowl the opposition out “in a day” after inserting them but I think we all know the truth. In reality Root was looking to bowl South Africa out for about 200 (or ideally less) and then build a match defining first innings lead. It was an optimistic plan considering England’s lack of preparation and recent form to say the least.

The other hint most observers missed is that Sam Curran was England’s best bowler by far. I like Sam as a cricketer, and he’s clearly improved his bowling, but he still needs assistance from the pitch (or in the air) to be a difference-maker at Test level. The fact he picked up four wickets should’ve told everyone that the pitch favoured the bowlers and that South Africa’s total of nearly 300 was a good one.

England’s performance with the bat wasn’t just deja vu; it was deja vu all over again (if you get my meaning). We’ve seen this kind of stuttering effort so many times in the past. With the exception of Joe Denly, who again showed great stoicism and the occasional flash of flair, nobody came to terms with the conditions. Philander, Rabada and Co were just too good.

It’s hard to blame the batsmen too much on this occasion as the majority received good deliveries to dismiss them – particularly Burns and Sibley. However, the wickets of Root (who defends to backward point with half a bat far too often for my liking) and Stokes were particularly disappointing. 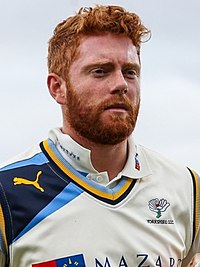 Jonny Bairstow was also dismissed in all too familiar fashion. Although the ball that got him was fast and kept a little low, he was clearly trapped on the crease with his bat anything but straight.

We’d been assured that Jonny had sorted out his technical issues in the nets (in fact, England justified his recall on this basis) but it certainly didn’t appear so on today’s evidence. Nortje simply followed the blueprint that all international bowlers have followed in the past – pitch the ball just outside off and move it back into Bairstow.

Although England’s bowlers showed some fight in the final session (and ensured that we’ve still got a sniff) their efforts couldn’t disguise the fact that the Saffers are on top and should win this Test tomorrow or early on day 4. They’re currently 175 ahead and will feel very comfortable if they can add another 100 runs.

Sadly this pitch isn’t improving either. If anything it’s getting harder to bat on. England are going to need a hero or two if we’re going to pull this off.