Well, you can’t blame India supporters from being excited. In fact, the game at Brisbane was a hell of a lot more interesting than the one at Galle. So congrats to India. And thanks for proving that The Gabba (and Australian venues in general) aren’t quite as impregnable as they once were. Here’s new writer Abhijato Sensarma’s take on that amazing fifth day …

Improvisation has an essential rule – always consider yourself to be the least important member of the performance.

When Cheteshwar Pujara walked back to the pavilion after facing another brute of a ball in the final session of the series, he must have reminded himself of the role he was playing – the least important one, of course. He wore enough body blows during his innings to be admitted as another patient in the hospital ward which the Indian team’s hotel must have become. There could be only one reason why he played for as long as he did, facing all that he did. When you know that you’re the least important part of something, you accept the larger narrative. You start to play for the team, and the team starts playing for you.

This spirit of improvisation has permeated the entire Indian cricket team on several occasions during this tour. Even in the closing moments of the series – which were no less exhilarating than the rest of them – Pant was going for his shots with little regard for how a stumble at the final hurdle might have been perceived back home. And when he reverse-swept Nathan Lyon for the umpteenth time today, I could not help but nervously smile at my mother. My online exam was about to start in less than ten minutes, whereas India needed to enforce a result in the six or so overs left in the day’s play.

“Do you want me to tell you the result when they win … or don’t?” my mother asked me, but I politely declined the offer. My friends and I had devised a strategy to keep a tab of ESPNCricinfo open on a split-screen while giving our exams. The cameras would need to be turned on for invigilation, but if I could somehow position it conveniently…

I downloaded my paper, glanced at my camera, glanced at the score, and pretended to go through the questions I would need to answer over the next three hours. All the while, the score kept ticking along in a tab hidden in the bottom of the screen. A flurry of boundaries arrived even before my reading time had come to an end.

“India’s won!” my mother informed me, almost bursting into my room as she did so. I nodded at my question paper and afforded myself a smile. With the help of a bit of improvisation on my own, I already knew the greatest series victory in recent Indian cricket history had been achieved.

Halfway through this final match, even the least poetic of my friends stopped being sceptical of a side which was walking on crutches since the moment they got into their whites. Instead, we embarked upon the most ridiculous sequence of ‘Yes and?’ narratives in the history of the sport.

India gets bowled out for 36 in Adelaide – Yes and?

India’s stand-in skipper plays the best innings of his life to tie the series at one-all – Yes and?

Hanuma Vihari saves the match for India on one leg – Yes and?

India A conquers Gabba in their elder brother’s disguise? Anything goes at this point. Even after the experiences peak-2020 gave the world, this session of improv languishes at the bottom of the list of things I would have expected from 2021. 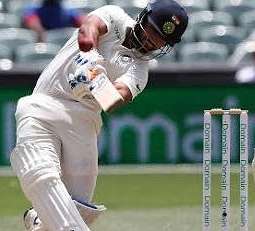 “Everyone’s looking at this game from the prism of their insecurities,” a commentator remarked on-air midway through the final session of the Brisbane decider. I quite literally looked at it against the backdrop of my insecurities – through the small screen of my phone, balanced against my media studies textbook which I had been revising from throughout the morning.

But at that moment, the Indian team lent me their confidence. I had studied enough. If I knew I had it in me to do well, why would I feel insecure? And with that rationale, I closed my textbook and turned my attention to the match till the moment the clock struck one to compel me to log into my examination.

I am confident it went well. But even if it turns out to be a 39 all out rather than a 329 when the teacher mails back my answer script, I now know there will always be another examination to prove myself in. Shardul Thakur trudged off ten balls into his debut. After a lifetime of toil, wasn’t he back at it, winning the match for his team at Australia’s impregnable Gabbatoir?

When I tell my grandkids about this day in the history of Indian cricket, they won’t be able to grasp the context of the match. Of course, I would try my best. Perhaps, I would even let them know about the ways one can have a peek at the score while giving their exams – if they promised to keep it a secret.

But once the result is known and the miracle is performed, the improbability of this scorecard will never go away for the ones watching when Pant drove the ball down the ground as a last hurray. You had to be there, I will tell them, reaffirming this stance once I’m done narrating the tales of Siraj and Natarajan and Sundar and Thakur, and how their careers began back in the good old days.

They might treat me with a shrug of the shoulders, akin to how I felt when I heard about India’s 2001 victory for the first time. “VVS Laxman’s a legend, isn’t he?” I had said back then. His innings remains a fact and not a miracle to me – his double ton at the Eden Gardens had been compiled two years before my birth.

Perhaps, my grandkids will say the same to me about a Pant or a Pujara or a Sundar, or all of them – “Of course. He’s a legend, isn’t he?”

Abhijato is an eighteen-year-old student who lives in Kolkata. He is a passionate writer and follows the game of cricket whenever he can. His works have been published in The Times of India, The Telegraph, The Statesman, The Guardian, and ESPNCricinfo.