Right then. Let’s get the Jofra thing out of the way first otherwise it’s going to reside in the corner like a huge elephantine distraction. What on earth was he thinking? I imagine the players were given strict instructions but he either didn’t understand or wilfully ignored them. It’s not good enough really.

However, we all make mistakes. Many of us make big mistakes. But we inevitably get a second chance. What’s more, going home for an hour isn’t the greatest sin in the world if he stayed away from other people. The bio bubble was clearly stretched but I doubt Jofra burst it at any point.

The problem, really, is that it’s difficult for the doctors and scientists involved to know for sure. They have to err on the side of caution every time. They can’t just take a player’s word for it.

And that’s the bit I imagine that Archer didn’t quite understand. The rules are there for a reason to remove (or completely minimise) the chance of infection insidiously creeping into the camp. But having said that, I don’t understand why the players can’t all travel on one coach together? Surely this would lower the risk even further.

Basically, this is just one big cock up all round. I hope that Jofra got a roasting. But equally I hope he’ll be forgiven and we can all move on. In fact, arguably the most annoying thing about all this is that Archer has given his critics more ammunition. He’s made it easier for people to argue that he’s not committed enough. Sigh.

I just have one question though. What on earth did he go home for? Was it to feed the cat? Have a dump? FaceTime his mum? Slip in a bit of nookie? Or perhaps pick up his favourite tome by Noam Chomsky or Rush Limbaugh? I really have no idea. Feel free to add your suggestions in the comments below.

Now let’s discuss the actual cricket. What a fantastic day for England! 207-3 is an excellent result after being inserted on a pitch expected to assist the bowlers. Joe Root and his merry men should feel rather chuffed.

The hero, of course, was Dom Sibley – otherwise known as the corpse with pads on. But who cares if his strike rate was just 34? He’s done a fantastic job for his team. England have been missing gumption like this for years. 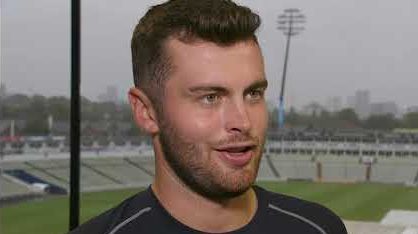 I just don’t understand the criticism Sibley’s received from certain quarters. Yes, of course we’d all like him to develop his game and play a few more shots – albeit only when circumstances require it (which they didn’t yesterday). However, can’t we just celebrate the fact that we’ve finally unearthed an opener who occupies the crease and doesn’t expose the middle order to the new ball?

Sometimes I think people crave ‘the perfect cricketer’ so much that they can’t see the woods for the trees. Yes of course Sibley will try to develop as a batsman (he’ll certainly need to play spin better) and he may or may not be capable of doing this. However, even if he can’t, and the Sibley we saw on day one is as good as it gets, then he’ll still be a very valuable cricketer for England. Basically Sibley can be the glue that can keep the foundations of our innings together. And that’s something to celebrate. It’s certainly better than having Jason Roy back!

I personally thought Sibley played a masterclass yesterday. With the West Indies a bowler down, his approach was exactly the right one – wear the opposition down to make life easier for the middle-order. Indeed, if Jos Buttler finally pulls his finger out in the second innings he’ll owe Sibley an enormous dept of gratitude. After all, it would’ve been Sibley that blunted the attack and made Roach, Joseph, and Holder bowl far too many overs.

The other batsman we should thank is Ben Stokes, who once again knuckled down beautifully. The fact his 59* has taken 159 balls, and his strike rate isn’t much higher than Sibley’s, just shows that scoring hasn’t been easy on this sluggish pitch thus far.

Talking of the pitch, what on earth happened? Manchester is supposed to be one of (if not the) quickest surface in the country. That’s why losing Archer for this game was such a blow. I didn’t exactly expect Perth but I thought there’d be more pace than we saw. Perhaps it will speed up a bit on days two and three?

Before I sign off I should also discuss the Windies. It was a disappointing day for them. I thought their tails might be up after their heroics in Southampton. However, it looks like they’re still struggling for consistency too.

The tone was set by Shannon Gabriel, whose opening spell was so wayward that it looked like he was ‘targeting’ the corridor of uncertainty outside Sibley’s leg-stump. I’m not sure what was up with Gabriel but he appeared to be carrying some kind of injury. He certainly wasn’t moving particularly well in the field.

Then we’ll see if a fired up Broad, Chris Woakes and Sam Curran, who also have something to prove, can get more out of this sluggish pitch.

There’s no shame in losing to the better team on the day. It’s frustrating but that’s life. The Windies were excellent throughout and England came up short. Kudos to them. What’s worrying, however, is that England didn’t play particularly badly. We certainly weren’t at our best; but we weren’t at our horrifying worst either. Therefore, when you think about it, this defeat is actually quite hard to take. The bottom line is this. England picked the best...

Read on36 comments
The Full Toss