First we had Andrew Stauss’s tactless ‘mums and kids’ comment. Then we had Tom Harrison’s ill-advised and rather defensive claim that The Hundred wasn’t for existing cricket fans. Soon afterwards we had that laughable launch ad with a picture of an all-male audience of twenty-somethings at an American rap concert.

And then we had the completely avoidable controversy over the ECB’s decision to make KP snacks the official sponsor. Only the ECB could think it’s a good idea to make a producer of high-sugar and high-salt foods the primary sponsor of a tournament aimed at kids in the midst of an obesity crisis. The decision was so bad that the respective snack logos will no longer appear on kids replica shirts. Talk about embarrassing.

Oh, and did I mention that CA confirmed this week that Australia players will miss at least half The Hundred too? So no India or Australia players, and hardly any England players either. So much for the greatest show on turf.

If you’re one of the people out there who don’t particularly care that The Hundred will push the county championship to the fringes of the season in perpetuity, damage the England Test team, degrade domestic 50 over cricket, and generally create a giant immovable object in the middle of an already congested calendar – presumably because you’re convinced that ECB ‘research’ (that they refuse to publish) makes a compelling case for it – then you were probably looking forward to buying your tickets today.

It’s a shame, therefore, that many supporters were greeted with the message below instead: 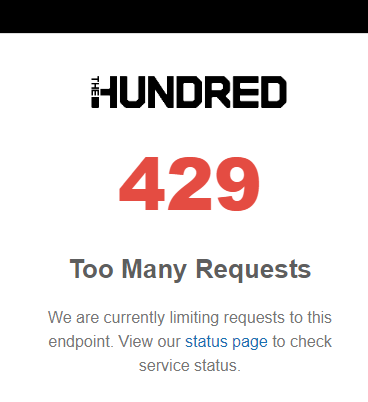 This message is hilarious for two reasons. Firstly, the ECB have spent £hundreds of thousands on marketing this event – money existing supporters paid for in Test tickets and / or Sky subscriptions by the way – so it takes a special blend of ineptitude to cock up the ticket processing system when your brand new audience does occasionally respond to your flaccid call to action.

Secondly, the idea that ‘too many’ people want to buy tickets for the Hundred is the biggest overstatement since the BBC declared Eldorado high quality drama. Colin Graves himself has said he’s expecting stadiums to be 60% full, so the idea that people are clamouring to attend like over-excited teenage girls scrambling for precious Justin Bieber tickets (apparently he’s some kind of pop star) is farcical.

The likeliest scenario – especially given previous cock ups – is that the ECB have not been overwhelmed by applications; they’ve simply installed an inadequate e-commerce system which doesn’t work. I feel a little sorry for the IT guys, as apparently stuff like this is hard to test in advance, but it’s still absolutely typical considering everything that’s come before.

What’s worse is that would-be purchasers were apparently exposed to an additional level of stress when they did eventually get through. As the screenshot below from Twitter shows, some ‘cricket fans’ had very little time to get their order posted.

I hope you had your credit card immediately at hand guys, because if you can’t type fast enough you’ll lose those precious Cardiff Crashers versus Southern Setbacks tickets faster than you can say ‘piss up in a brewery’. 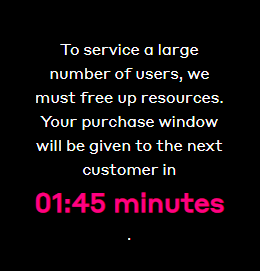 But there is some good news to come from all this. The Hundred is indeed proving to be a mechanism whereby people of all faiths and incomes can purchase tickets in a cost-effective manner. This has got to be good for growing the game, right?

Apparently tickets were either free or just £5 when they went on sale to county members a few weeks back. And these new ‘priority’ tickets – i.e. tickets for those who make pressing ‘refresh’ on their browser every ten seconds a priority in life – can cost as little as £26 for a family of four.

It’s a shame the ECB couldn’t have subsidised tickets this way for other competitions with far less confusing rules in the past. The T20 Blast maybe? Or perhaps even England games that haven’t sold out?

But no. The truth is they only do it for competitions that are so unpopular, and so despised by existing cricket fans, that they basically have to give the things away to fill the grounds just 60%.

And then they claim it’s all part of some benevolent initiative rather than simply admitting that they’re desperate.