Today Mark Cohen is back with his take on the growing number of fines issued to players for celebrating, swearing, and arguing. Is the ICC’s stance necessary to protect the game’s reputation or are they simply causing a storm in the proverbial teacup?

The words “15% fine and one demerit point” seemed to become synonymous with the South Africa v England Test series. These were the punishments meted out to Vernon Philander and Ben Stokes in consecutive days at Johannesburg as a competitive but tetchy series drew to a close.

Other players (on both sides) have been on the receiving end of the ICC’s trigger-happy disciplinary system over the past few weeks. Stuart Broad received the same punishment for his confrontation with Faf du Plessis (who fortunately escaped without censure), as did Jos Buttler who was caught swearing on the stump mic.

Although England went on and won the fourth test handily, and with it the series, these incidents produced quite a few negative headlines. Instead of focusing about a team rejuvenated by the successes of Pope, Bess and Sibley, it appears that Test cricket is trying to find yet another way to sell itself short.

Those of us who grew up in the 90s were not treated to a cavalcade of English cricketing success. It was more than compensated for by the Allan Donald stare, the Merv Hughes’ ‘retuning’ of the ball back to the keeper at the end of an over (which nearly decapitated opposing batsmen), and the towering Curtly Ambrose giving diminutive opposition the most intense death-stares imaginable.

The Philanders, Stokeses and Kagiso Rabadas of today are not so different from their predecessors. Like Donald and co. they have had to fight tooth and nail to pull on a Test cricket shirt for their country. The difference with this generation is the intense media microscope that now hovers above them both on and off a cricket pitch. Of course, Stokes knows this more than anyone else. 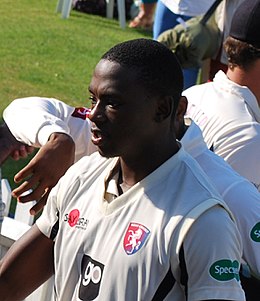 Conspicuous by his absence from the South African attack in the final test, Rabada exemplifies the impossible tightrope test match players are currently expected to tread. Aggression is an integral key to his success. It’s the same with Stokes, who Rabada pointed off the pitch in 2017.

Asked after that incident whether he would maintain his aggressive approach, Rabada said “it’s simple: just don’t swear but be yourself”, adding that he and Stokes would share a beer after the match. Yet Rabada was still deemed to warrant a demerit point and subsequent one match ban for his animated celebration after bowling Joe Root in the third Test.

Michael Holding made a spirited argument on Sky Sports that Rabada should have known better than to celebrate in that way given his history. Context, he said, was everything – the bowler had been banned four times for aggression towards the opposition so why make the same mistake?

Although one can see where Holding is coming from, it’s worth pointing out that the paceman didn’t swear or gesture towards the dressing room on this occasion. Surely that was a sign he had indeed learnt his lesson? Not so, said the ICC. The players themselves seem to know where the line is. A disciplinary system should be there to penalise those who forget.

There has also been no indication that coaches are going to do anything to curb their players’ competitive spirit. Chris Silverwood gave a very casual response to Jonathan Agnew when asked about whether he thought the test series had been overly aggressive.

Meanwhile, Jos Buttler questioned the need for stump microphones as he sat on the ICC’s naughty step. I’m not sure I agree that test cricket should be filtered for TV, but Buttler’s comments also suggests the players aren’t going to stop sometimes calling each other “f***ing k******s” anytime soon.

International players and coaches thrive off “a bit of niggle”. Nasser Hussain gave some insight to this when responding to his Sky colleague Holding. He claimed it was easy for pundits to forget how it felt on the other side of the white lines. It’s hard to be calm and emotionally detached when you’re under intense pressure and desperately want to win for your country (and your career).

I agree with Hussain that Rabada’s actions in Port Elizabeth should be seen in this context. He’d been bowling in 33-degree heat without the new ball. When he dismissed the England captain he proved a rather large point. Who wouldn’t want to enjoy that?

One is left to wonder how Donald et al would fare now. Are modern players held to a higher standard beneath the media microscope than their predecessors? Although the current generation do occasionally go too far – Stokes was clearly foolish to swear at that spectator – neither should players suffer unduly at the hands of a rigidly draconian rulebook.

Perhaps one solution would be to hand some control back to the match referee? He can then deal with incidents on a ‘case-by-case’ basis. Banning players cannot be the default option otherwise Test cricket’s competitive edge will be blunted beyond repair.