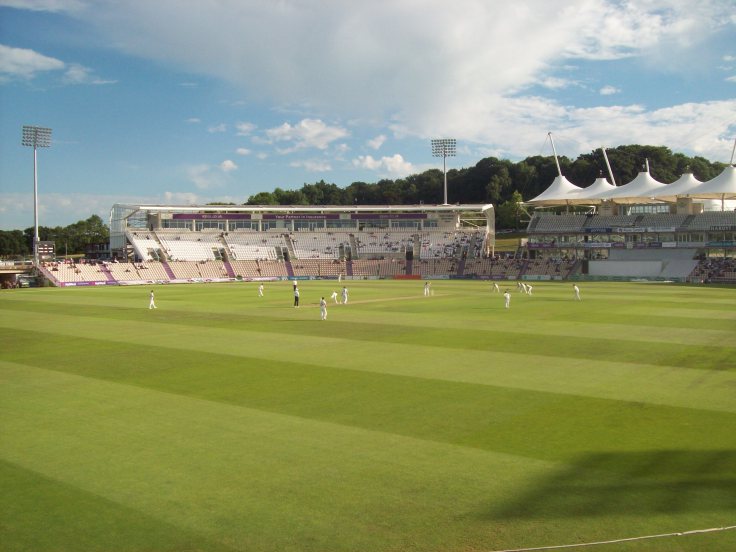 Yesterday the ECB announced which venues would host Ashes tests in 2023. They also announced which grounds would stage games in the dreaded City T20 competition. It surprised absolutely nobody that the traditional big venues (plus Cardiff) monopolised the biggest fixtures. Sigh. However, the decision not to award the Ageas Bowl an Ashes test did raise some eyebrows. Was this the right call? Interestingly Hampshire fan Hector Cappelletti thinks the ECB got this one right. He explains why below …

For someone residing no more than twenty minutes’ walk from the Ageas Bowl and a Hampshire fan of many years, I should have been excited that my county were in the running for an Ashes test. Reality dictated a much different reaction though. For nearly half a century Mick Jagger has been singing that “you can’t always get what you want” but in the case of modern day cricket such a maxim seems rather churlish. Five summers from now the Ashes are set to come to town, the culmination of a dream for some, if not all, in charge of Hampshire County Cricket Club who long believed in the “build it and they will come” mantra. Unfortunately however, the champagne corks will not be popping any time soon.

Fifteen summers have passed since this author first undertook a trip to the Rose Bowl and, unfortunately, the sense of ambivalence toward the stadium has grown with each passing year. Such an opinion could be viewed as cricketing heresy but one finds little agreeable with the ground that replaced the humble, homely Northlands Road headquarters that served the county for over a century.

Granted, the walk from one’s front door to venue is rather pleasant; once across the A27 the route wanders along a sylvan path through Telegraph Woods before one is disgorged into an area behind the western stand and the Nursery Ground. And once inside the venue the initial outlook is particularly noteworthy. Residing on a plateau looking out across the commuter town of Hedge End (little more than a suburb of Southampton itself as the gradual urban sprawl has engulfed any verdant definition between the big city and the satellite locales) toward south-east Hampshire the ground commands stunning views, particularly from the highest vantage points.

Such vistas often come at a price though. Despite housing a rather incongruous hotel along one flank the ground is very much open to the elements; fine on a balmy afternoon but the English cricket season regularly gives with one hand and takes with the other on such matters. Thus, if the wind blows from wrong direction there is nothing to curtail the effects of the breezes and nowhere to escape the chilly blasts without missing the play. On the flip side two significant stands, named after Shane Warne and Colin Ingleby-McKenzie have risen in recent years, seemingly offer protection on those aforementioned balmy days but the translucent materials on the roof arguably provide a similar affect to a giant conservatory roof rather than decent shade. Not all is bad though, leg room is generally capacious whilst the itinerant spectator is able to wander around the main concourse at the summit of the original seating area with near uninterrupted views if so desired.

Long range views may prove stellar but focus on the raison d’etre for one’s visit and matters are not quite so pleasing. This author was once informed that the playing area at the Ageas Bowl is the largest in the country although one suspects that this may be apocryphal. Regardless of whether such a statement is indeed true, one perennially feels as if they are miles away from the action no matter where one is sat or which wicket is being played upon. Throw in the awful fare on offer from the generic food stalls and the experience is eminently memorable, just not in a positive way.

Spectating perpetually remains a trying experience, not aided by the ethos and drive for international fixtures and THAT Ashes test. Seven years ago Hampshire fell on financial hard times and elected to sell the venue to Eastleigh Borough Council. Such apparent altruism extracts its pound of flesh though courtesy of an increasing number of concerts each year. County cricket is not a money-spinner but hosting a gig for Simon Cowell’s latest shiny toy or an ageing rocker generates plenty of alternative income.

First to suffer from these interventions is the ground itself, upon a visit to a T20 Blast contest last summer one was appalled at the state of the scarred outfield, a patchwork of seemingly dying grass battered by the previous weekend’s excesses. Cricket’s low position on the priority list is further illustrated by its lack of promotion in the local area. This author regularly ventures around the twin locales of Hedge End and West End, between which the Ageas Bowl resides, and will often witness posters and cardboard flyers advertising tattoo festivals, vintage weekends, Prosecco tastings, wedding fayres, firework displays, business expos, Christmas parties, New Year celebrations and the like throughout the year. The dearth of similar adverts for county cricket is most conspicuous during the summer though the occasional T20 Blast advert provides the odd exception.

There are other small occurrences that also rankle. Building a new ground offered an opportunity to make a statement to the club’s history or the local area. Instead the ground was named the Rose Bowl, a generic pointer to the red rose of Hampshire but little more than a missed opportunity and potential confusion with the stadium of the same name in Pasadena. Now even the red rose has been sacrificed at the altar of commerce; at least the equivalents at Durham and Lancashire had the grace to include the stadium’s previous name in the new version rather than replacing half with that of a corporate sponsor. Escaping such irritants is also impossible. Hampshire will host 39 ‘days’ of cricket this summer but none will take place outside of the Ageas Bowl’s post code. This has been the status quo ante for the last seven summers.

One would think that the advent of the Ashes would surely quell all such negative issues though. Ashes cricket was the premise for much of the construction at the site so the stadium was tested under the parameters for which it is best suited. Unfortunately such factors are still not enough. Akin to golf’s Ryder Cup, the Ashes has morphed into an overhyped, macho posturing, infantile pantomime. Naturally the series has always received its fair of attention during the days and weeks prior to the first test but recent series have been permeated by an obnoxious attitude resulting in certain acts of chicanery deemed as all part of the game. Similar tomfoolery is likely to be offered when Australia defend the Ashes during the 2019 summer as the series is likely to venture down a tit-for-tat cul-de-sac. Goodness only knows what will be deemed as acceptable five summers down the line. Throw in the aforementioned charmless food, drinks (alcoholic and non-alcoholic) priced exorbitantly and minimum ticket prices likely to start at a minimum of 60 pounds each (probably more with five years of inflation and hype) and the attraction soon diminishes.

All of which seems rather Eeyore-esque when one considers the efforts of those in charge of the club itself and the stadium that has come to fruition. Such a term sums up the Ageas Bowl’s existence though. It is a stadium constructed for international cricket and associated events where Hampshire are just unfortunate tenants. Nevertheless, this author intends on watching a handful of days cricket at the Ageas Bowl this summer but all will be a case of watching the players on show (county champions Essex, Cheteshwar Pujara for Yorkshire, Jofra Archer and Rashid Khan for Sussex) rather than because of an affinity with the venue.

I’ve tried, I really have tried to form a bond with the ground, a kinship and a connection. Unfortunately it still leaves me as cold as one of those chilly, brisk breezes that so often wreak havoc on those in attendance. In the aftermath of George Dobell’s Cricinfo piece one member of Twitter proferred that the Ashes should be played at Lord’s, the Oval, Edgbaston, Trent Bridge and Headingly rather than newer test venues. One finds it almost impossible to disagree with such sentiments.