There are few pleasures in life quite like a day spent at a county outground. I am sure you all have a favourite one. Perhaps it is the picturesque surroundings of the Cheltenham Festival or historic Scarborough where the history of Yorkshire cricket drips from every blade of grass.

Mine has always been the Guildford Cricket Club, where Surrey have played most seasons since 1938.

From the outside the ground seems unremarkable. It is situated next to a busy main round on the outskirts of town and has boards covering the mesh fencing to prevent those without tickets from getting a free day’s play. It would be possible to drive past without even noticing its existence.

However, once inside, the ground itself is a delight. Picnic chairs surround an immaculately kept playing area. There is a small members’ stand on one side and a village fete style catering tent offering homemade cakes and local tipples from the Guildford Brewery. At lunch and tea queues snake around the ground for a 99 from the ice cream van parked near the gate.

I first visited the Guildford Festival in the summer of 2001 to watch Surrey play Yorkshire. As a junior Surrey member I was keen to see my county play as much as possible and to watch my heroes from closer quarters than the vast expanse of The Oval would allow.

I was also blessed to be growing up in the era of one of the finest teams the county has ever seen. A young Surrey fan at the turn of the century could look forward to seeing the guile and craft of Pakistani spinner Saqlain Mushtaq, the doggedness of veteran seamer Martin Bicknell and, England commitments permitting, the batting talents of Mark Butcher and Graham Thorpe. I could also see my favourite cricketer, Alec Stewart.

I collected many autographs at Guildford over the years but Stewart’s moniker always eluded me. He was, without fail, the first player to rush off the field at the end of each session before the children clutching autograph books had the chance to rush on. I always wondered if this was a deliberate ploy or whether he just really liked the Guildford lunches. I even managed to miss out at his final Test match in 2003 as he was carried around The Oval on the shoulders of his teammates. Only current England team director Ashley Giles stopped to sign the open books and he quickly wished he hadn’t when one young fan asked for the shirt off his back. 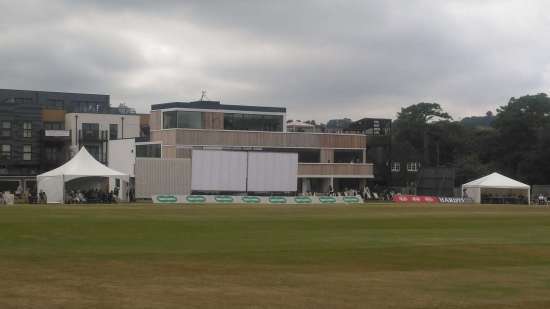 Guildford did give me the opportunity to meet many other greats of the game, however, and those encounters have lived long in my memory.

For instance, I felt more sympathy for Darren Lehmann in his trials as Australian coach after recalling my encounter with him in 2001. The then Yorkshire captain sought me out in the crowd at a lunch interval to give me the autograph he had not had time to sign before play started. Many of the Surrey lads were also very genial. Alex Tudor, in particular, always went out of his way to make time for young fans.

Guildford also afforded me the privilege of seeing some of the greats of English batting in the years before they became famous. In 2003 I was able to watch Andrew Strauss strike a graceful 87 for Middlesex in a game where the crowd atmosphere at times resembled a football match. I eagerly told anyone who would listen that he would soon be making runs for England.

One year later I was privileged to be at Lord’s on a sunny May afternoon as he proved that prediction to be true.

In 2018, however, I decided to go back. I was truly glad that I did. Many things have changed in this world in the last 15 years but the beauty of county cricket is that, to all intents and purposes, it is one of the few things that remains the same. Apart from a striking new wooden pavilion, so has the Guildford Cricket Club itself. Even Alec Stewart is still in residence, not as a player any longer but as Surrey’s Director of Cricket.

Much has been made of the imminent demise of the county game but, as I surveyed the packed crowd inside this small, picturesque ground, it struck me that there is life in the old dog yet. Myself and my uncle, who was making his first visit to Guildford, had to circle the ground twice just to find a seat.

With this year’s visit to the festival postponed due to the lockdown, I am left to remember last year’s visit when even the drizzle and an uncharacteristically suspect pitch could not spoil the joy of watching South African great Morne Morkel bound in to bowl at my favourite ground.

I also spotted two flags tied to the fences at the side of the ground. One of them proclaimed the death of county cricket – “killed by the ECB with 100 balls”. The flags had been placed there by a group calling themselves The Peter May Boys, which sounded slightly like cricket’s version of football’s famous “ultras” groups. I admire their spirit and I fear for the future of the game myself but I hope they are wrong.

I now have a nine month old son and I hope that in years to come he may eagerly run across this same Guildford outfield collecting autographs. Who knows, he might even manage to get Alec Stewart’s.