At one point I didn’t think I’d live to tell this tale. The venue was the Lord’s Academy. The bowler was Devon ‘you guys are history’ Malcolm, and the batsman was, erm, little old me. And to think that I actually volunteered.

The occasion was a promotional event for Play With A Legend, a company that’s teamed up with the PCA to give ordinary cricket fans the chance to play with their heroes. The format can be flexible but it usually involves a game somewhere followed by a chinwag with the chosen legend. Everybody wins really. Blokes like me get to wax lyrical about their experience, and ex-pros get a chance to connect with the fans and earn a few quid.

Our experience involved an indoor game of T20 at Lord’s, with a Devon Malcolm bowling master-class between innings, followed by a few beers. The game itself was a good laugh (although predictably my team lost) but the highlight for me was facing a couple of overs from Dev. He needed a batsman at the other end to showcase his skills, and given my big ears, bushy tail and enormous front teeth, I was chosen as his rabbit.

Although Devon is now 53 years old – although you wouldn’t have guessed it judging by his incredible physique – he can still crank it up. I remember when he was clocked at 90mph at the age of 40. Fortunately he went easy on me (I wasn’t wearing a helmet) although he still seemed quite sharp to an amateur like myself.

It wasn’t the pace that bothered me though. It was Devon’s ability to swing it. By his reckoning, 80% of the first class wickets he took came from swing bowling – especially during the later years of his career. Most deliveries started on a middle and leg line, but swung considerably and finished outside off-stump. I have to admit that he turned me around and beat the bat a couple of times.

I just about managed to survive the examination of my technique, but it wasn’t easy. And of course, I managed no scoring shots at all. He gave me absolutely nothing to drive, and my reactions weren’t quite quick enough to punish the one shortish ball with a bit of width I received. I’m sure he’d still clean up at most levels of competitive league cricket. 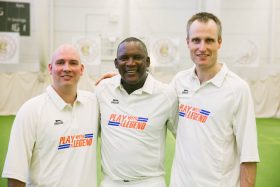 After the game we were lucky enough to share a beer with Devon and pick his brains. Friend of the site Toby Richardson and myself also had the opportunity to interview him for this article. We only had 15 minutes, so there wasn’t time to talk about the current England side, but we did manage to talk about his international career and his famous 9-57 against South Africa. Devon was in good form – and seemed like a really good guy – so it’s well worth listening to the audio file below.

Away from the microphone Devon was just as congenial and laidback. He also told us a few crazy stories about England tours past – including a few hilarious anecdotes about guys like Gough and Tufnell.

If you’d like to know more about Play With A Legend, here’s a link to their website. It’s a good idea for a stag do or birthday bash, and quite a few big names have signed up, including Darren Gough, Matthew Hoggard, Ryan Sidebottom, Simon Jones and Marcus Trescothick.