Today new guest writer Jai Chainani looks at the resurgence of Ishant Sharma who has bowled outstandingly well in Test cricket since 2018. Is he finally establishing himself as an Indian great? And is India’s pace attack currently the best around?

When we talk about the current India Test team, one thing which is rarely spoken about is how the pace attack hunts in packs with each bowler playing a different role. It’s now a formidable squad of fast bowlers that’s on par with any the world (in any given conditions) because of its variety.

There’s Jasprit Bumrah – the X factor of the pace attack, who has been nothing but a complete revelation. His unorthodox action, and his ability to hit the deck hard with pace and swing makes it difficult for the batsman to pick up length. Then there’s Shami who not only swings it late but also makes the ball seam with both the old ball and the new. And then there’s Bhuvi who can swing it both ways and consistently hit dangerous areas with his accuracy. For pace, there’s the aforementioned Bumrah plus Umesh Yadhav who can be as quick as anyone. He has proven himself in home conditions purely because of his ability to exploit any reverse swing.

However, another key member of this pace attack is Ishant Sharma – the most experienced of the lot …

On starting his test career way back in 2007 against Bangladesh, the proficient Sharma has now played 97 Test matches for India and toured the SENA countries at least thrice. The towering seamer first made his mark when he bowled a ferocious spell to Aussie captain Ricky Ponting on a spicy Perth wicket. That spell by Ishant, which claimed Punter’s wicket, showed all his attributes –pace, bounce, along with some swing. Later on, when Australia toured India for 4 test matches in 2008, Ishant grabbed 16 wickets in the series and was awarded the Player of the Series award.

Ishant’s consistent performances at that time made him the second established seamer in the test team alongside Zaheer Khan who lead the attack. The Zaheer-Ishant duo enjoyed profound success when India won their first Test series in New Zealand in 41 years and then achieved a creditable draw in South Africa. 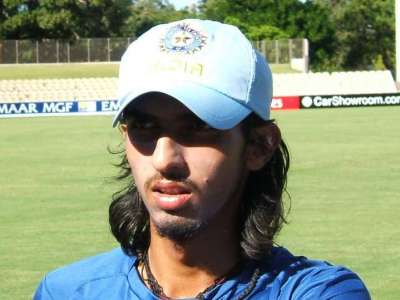 As a key part of a successful team, Sharma looked like a legitimate prospect for both the present and the future. Indeed, his pace and height made him an ideal candidate for overseas conditions. Sadly, however, rather than flourishing from here, his career took an extended downturn from 2010 to 2017 where he only took 172 wickets at an average of 37 in sixty Tests.

His worst performance in that period came in Australia in 2011-12 where he only grabbed five wickets from four Tests. One of his main problems during this difficult time was that he could no longer consistently bowl at 140kph due to an inappropriate head position. Another problem was his awful wrist position that prevented him from moving the ball. This discouraged him from bowling fuller and prevented him from taking wickets as a strike bowler.

As a consequence, Ishant Sharma became merely a one format bowler for India until 2018. After getting unsold in 2018 IPL season he decided to spend a season in England with Sussex. Asians are always told that your red ball cricket education is completed when you travel west.

This county season with Sussex did wonders for Ishant, not least because he was mentored by the club’s coach and former Aussie paceman Jason Gillespie.

Talking about his time with Ishant, Gillespie described how they worked on his wrist position:

We adjusted his grip, the position of the ball in his hand and his release positions at the point of delivery, where his wrist and fingers were. He tried a couple of different things until we found that if he held the ball a certain way, it went straight on – it was just his wrist position at ball release. His fingers were pointing towards fine leg and his wrist was shaping towards fine leg as well. We adjusted that to get that going down the pitch as opposed to fine leg.

Another aspect where Ishant worked hard was on his follow-through:

We got him to stay nice and tall at the crease and following through straight down the pitch and not going off the pitch too early in his follow through and that allowed everything to flow towards the batsman. That’s where I think he made his biggest improvement and that was all on Ishant – it was a lot of hard work, he spent hours and hours in the nets just perfecting that one delivery.

These adjustments finally revived the swing in Ishant’s bowling and enabled him to bowl much fuller. Rather than aiming at the top of off-stump, the Sussex coach persuaded him to aim at the batsman’s knee roll, especially in England where the new ball moves so much.

Ishant’s career turned around dramatically as a result. Right now his Test average has improved to a creditable 32.39. But since the start of 2018, his average has been a remarkable 19.78. This has been a tremendous surge and one senses that he’s finally a bowler in his prime.

With 297 wickets already in his bank, and age still just about on his side, who knows where Ishant will finish in the pantheon of Indian fast bowlers. He is rapidly approaching Zaheer’s 311 and might even have Kapil Dev’s record 434 wickets in his sights if he can stay fit. After being undervalued and somewhat forgotten for so long, Ishant is belatedly fulfilling his immense potential.