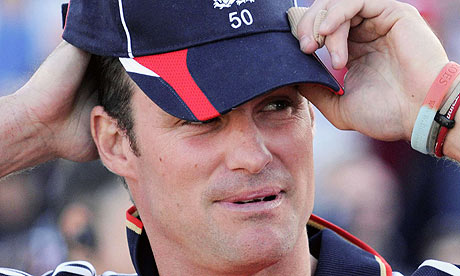 We came, we saw, we were rubbish. England beat the Netherlands today by the slimmest of margins. But after what can only be described as the worst bowling and fielding performance since err, the last World Cup, the players deserve no more than a kick in the nether regions.

If you weren’t able to watch any of today’s game, make sure you see the highlights. But don’t worry if you’re working late and miss them, you’ll probably be able to catch the best bits on Saturday’s edition of You’ve Been Framed. Talking of which, Jeremy Beadle could probably catch better than most of our fielders – at least he’d actually try to get under the ball.

At one point today, KP and Anderson convened under a skyer, had a cup of tea, discussed the price of tulips, then left the ball for each other to catch. The result? The ball dropped harmlessly between them and the crowd erupted in laughter. Ryan Ten Doeschate hadn’t reached fifty at the time. Had England taken the chance, it might have been a different match.

It was just one of a number of laughable moments. Ten Doeschate, who went on to make a brilliant hundred, reached three figures after a needless throw hit the stumps (for once) and ricocheted to the boundary. We also dropped three catches. The one Graeme Swann dropped will give him nightmares for years. I wouldn’t fancy being Swanny’s newborn son after that performance. I’d rather Mummy held me.

Things just seemed to go from bad to worse in the field. When we did eventually get someone out, the batsman was recalled because the fourth umpire noticed we had only got two men inside the circle. At least someone was on the ball.

Our woes began at the toss, when Andrew Strauss announced, much to the experts’ consternation, that England had picked six specialist batsmen and just four bowlers – even though the wicket was a batsman’s paradise. The fact that number seven batsmen have hardly made it to the middle thus far in the tournament was obviously lost on England’s think tank.

What’s more, the bowlers selected weren’t even the right ones. The seamers were absolute fodder in this match. The pitch was crying out for two spinners. The fact that KP was brought into the attack at the half-way stage, whilst Anderson was bowling medium pace with Prior standing up, admitted as much.

Our bowlers weren’t helped by Strauss’ mindboggling tactics. England’s strategy was probably the worst judged idea since Giles Clarke said ‘that Allen Stanford fellow, he seems like a straight up kind of guy’.

The plan involved bowling two feet wide of off stump – and then stubbornly persisting with the tactic when it clearly wasn’t working. The first straight ball came in the thirty fourth over. Having seen Australia and New Zealand knock over minnows by aiming at the stumps, you’d have thought the penny might have dropped.

However, despite our idiotic strategy, we still had enough experience on the field to beat Holland. That’s right, Holland. Not Australia, not India, not Bangladesh even. Our bowlers were taken apart by a team of amateurs.

Admittedly, Ten Doeschate is an excellent player, as all followers of county cricket know, but the others aren’t exactly Brian Lara. They’re not exactly Dutch either. Their Aussie number three, Tommy Cooper, qualified for the Netherlands ‘just like that’ because his Mum was born in Dutch New Guinea. However, we can’t exactly complain. Not unless we forget about KP, Trott, and Morgan.

England’s runs chase was the only positive of the day – and it might well stand us in good stead for the rest of the World Cup. However, it was hardly convincing. The pitch was superb for batting and the Netherland’s attack looked worse than Derbyshire’s.

There seemed to be a total absence of aggression. With wickets in hand, someone should have tried to hit a quick half century and put the game beyond doubt. Instead, we cruised along talking singles and just about kept up with the rate. When Bopara finally decided to have a go in the penultimate over, his lofted drive only just cleared the ropes. Had the fielder been properly placed, rather than a few metres inside the boundary, Bopara would have been caught and England might have lost.

No doubt Andy Flower will claim that a win is a win – and victory meant we avoided the ultimate embarrassment – but the performance was more than a little humiliating. One thing’s for sure, Ireland won’t be losing any sleep over playing us. Ed Joyce must be laughing into his Guinness.