Here’s Cam with his gut reaction to day 5 and his feelings about the Test match in general. Many thanks to Cam for filling in for James today …

I’ll be honest. This is my first one of these. And as I sit at my kitchen table, scratching my head for the searing insight I’ve been entrusted to deliver, I’m coming up short.

England won, yes. But in reality, what have we learnt from this Test match that we didn’t know before? Ben Stokes, who is very good at cricket, was very good at cricket. Dom Bess, who is handy with the bat and bowls okay offies, was handy with the bat and bowled okay offies. Sam Curran made things happen, Stuart Broad bowled one of those spells, Chris Woakes was excellent in home conditions and Jofra Archer risked the whole of humanity by breaking the biosecure bubble to (allegedly) go and see his girlfriend for an hour. Thus proving that there really is no bounds to a man’s stupidity when it comes to sex. And we knew that as well.

As I flicked through the channels to check I wasn’t watching some rerun of a previous match, I racked my brains for what was different this time. What lasting impressions have I taken from this match that I can write about here? 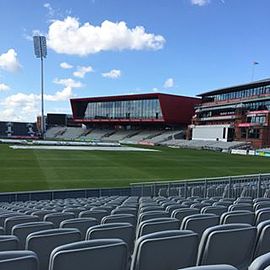 The answer was, for me at least, Dominic Sibley. Sibley batted brilliantly in an innings that was constructed with an air of permanency that feels as if it will last far beyond this Test match.

It was, of course, completely and utterly horrific to watch. And I admit, I am one of those fans who wants it all and sees style and substance as equally powerful selection criteria. However, just as when Mum used to offer up fruit for pudding or a teaspoon of cod liver oil in the morning, I’m gritting my teeth, and accepting that whilst I might not like it, it is good for me.

Annoyingly, Sibley actually lost 12kg before this series started otherwise this joke of calling him the essential fatty acid of the England batting line-up would’ve worked far better. But anyway, with our Omega 3 now perched at No.2 in the order the good news is that we can enjoy the rest of our England team far more. Our weekend treats of Root, Stokes and Pope are far better protected, and who knows, maybe even an increase of solid platforms will see Buttler finally fulfill that potential we all know he has. Wishful thinking? Perhaps. But I did already say I’m a man of style as much as substance so I’m happy to continue picking Jos forever.

For that reason, it naturally frustrates me that Sibley is in all likelihood the answer to England’s long standing issue with openers and by that measure I’ll now be forced to watch him for years to come. But I also respect him hugely for the way he goes about his game and the method he’s crafted for himself. Sibley has taken what can be an incredibly complicated art in batting, and simplified it to the nth degree. By recognising the intense difficulties involved with batting time, he has created a method that effectively makes the game, if not an easy one, then an inherently simple one. If the ball’s on the stumps, hit it. If it’s not, don’t. Ultimately, whilst Alastair Cook made a career out of playing two shots, Sibley only has one.

Sibley is playing checkers when everyone else is trying to play chess. And he’s winning at it.

There’s no shame in losing to the better team on the day. It’s frustrating but that’s life. The Windies were excellent throughout and England came up short. Kudos to them. What’s worrying, however, is that England didn’t play particularly badly. We certainly weren’t at our best; but we weren’t at our horrifying worst either. Therefore, when you think about it, this defeat is actually quite hard to take. The bottom line is this. England picked the best...

Read on36 comments
The Full Toss