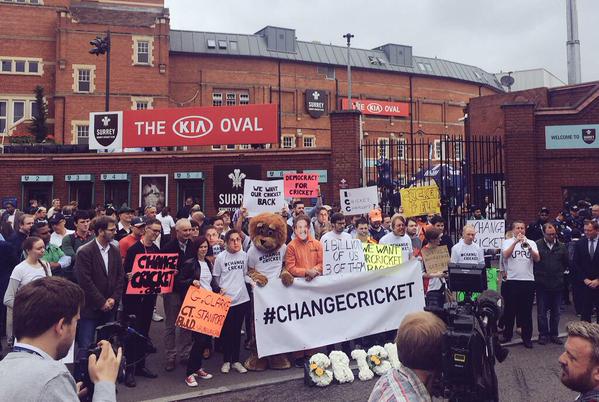 I like Mike Atherton. Apparently I’m not alone. Yesterday Athers won the SJA (Sports Journalists’ Association) cricket writing award for his work at The Times. I can’t really comment on his recent work as it’s stuck behind a pay wall (how apt for English cricket), but I do know he’s a very able and I respect his views immensely. He’s welcome to write for TFT anytime – as long as he appreciates that I’d be doing him a favour and not vice versa. Ahem.

The SJA also had good news for the The Telegraph’s cricket coverage, which took some criticism from rivals during the Pietersen controversy. The SJA judges, who are fellow professionals from the industry (editors, fellow journalists etc), usually name a winner and two ‘highly commended’ writers. In the cricket category the two commended journos were Nick Hoult and Jonathan Liew. I read these two guys quite a lot and I’m pleased their work has been recognised.

You might be interested to know that The Telegraph’s Paul Hayward won the overall Sports Writer of the Year – an award that transcends the individual categories. Well done him. David Walsh, a name familiar to many, won Sports Feature Writer and The Daily Mail won best sports newspaper. Although the latter award surprised me a little, they’ve got some good writers working for them these days. Lawrence Booth obviously springs to mind. You can read the full list of winners here.

However, the big news as far as I’m concerned is that Death of A Gentleman – the film that laid bare the problems facing world cricket – won the Television Sport Documentary Award. The film beat operations with far bigger budgets, including BBC Panorama and documentaries made by moneybags organisations like BT Sport. I’d like to congratulate friend of the site Jarrod Kimber, who we spoke to about Death of a Gentleman last year, and his colleague Sam Collins. You guys have done brilliantly. Let’s hope the ICC implements the reforms most fair-minded people want to see.

In other news there were three awards for Sky’s cricket team. They won both the Live Sports Broadcast and Multi-media award. Somewhat surprisingly Ian Ward won best sports presenter too. I like Wardy, and find him quite entertaining, but I’ve never really seen him as a star. Having said that he’s quite often the glue that makes Sky’s telecasts hang together. The big names like Nasser Hussain obviously get most of the attention (and quite rightly so) but I guess Ward certainly plays his part. Congrats to him.

Long time readers of the site will know that I’m deeply concerned about Sky’s monopoly of live cricket in the UK. I think putting some live cricket coverage on free-to-air television is a must – the loss of some money from Sky might be offset by the more lucrative sponsorship deals cricket might attract if more people watched the sport – but this is in no way a comment on Sky’s product. I think Sky to an excellent job. Their coverage is top-notch and those who can afford their subscription enjoy extensive, in-depth analysis that simply wasn’t available in the past. It’s just a shame so few people can watch it.

Finally – last but far from least – there was great news for The Full Toss. We were highly commended in the ‘best haircut’ category. I’d like to thank Advanced Hair Hats for all their support over the years. I hope your détente with the Marsupial Protection League is going well. Goochie sends his love.