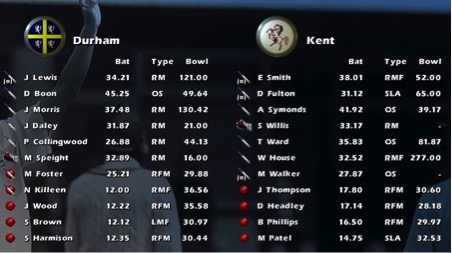 Welcome back! Durham’s real life season has been a bit of a disaster, but at least they have the excuse of starting in negative points. Here, back 1999 on International Cricket Captain, Durham are still a relatively new first class county and have just about shaken off the wooden spoon tag. But they’re still not good. And under my tutelage, they are somehow getting worse…

Fresh from the Hampshire humping, we had two one day friendlies at opposite ends of the spectrum. An easy win over Scotland, where Jimmy Daley and Jon Lewis starred with the bat, was followed up by an embarrassing 200 run defeat to Pakistan. There’s no shame in that, Saqlain Mushtaq took 6-13. But it would have been nice to save face. That’s all we’re here for.

Now though, we’re at home to Kent. I don’t know if the fixture computer is broken but that’s three home games in a row, which is lovely but unnecessary, especially as it’s the middle of May and still blooming cold. And guess what? The forecast for the next four days is miserable too.

I need to shake the team up a bit, I can’t let that awful performance last time out slide without sending a message. Melvyn Betts has managed 4 wickets this season, so he’s out. John Wood has taken 17 for the Seconds, so he’s earned a start. Brown has managed an even worse two wickets but his left arm variation saves him. Nicky Phillips performed admirably, with the bat anyway, but seeing as it’s not looking like much of a Tina he’s out for Neil Killeen, who is rather optimistically penned as an all-rounder.

Kent have a pretty good side, including David Fulton (now of Sky TV), a very young Andrew Symonds, Dean Headley and Ed Smith, who is inexplicably a genius in this game. In other words, I need to get the top order out cheaply. As if to show up my lack of skills, Kent include a slow-left armer, presumably on the back of how well we played Mushy last week.

I call heads and we lose the toss again. Kent decide to have a bat, and to be honest I would’ve had a bowl anyway. It should therefore come as no surprise that Kent reach 115/0 at lunch. And we’ve barely beaten the bat once, despite all 5 seamers having a crack. Smith and Fulton have been serene. We need to have a tasty lunch.

Got him! Foster temps Smith into a drive and he nicks behind in the third over after lunch. That’s better. That brings in the Australian International Andrew Symonds, who is pretty low down the list of people I’d like to see coming to the crease.

Fortunately, after making 26 typically aggressive runs, Symonds plays all round a straight one from Simon Brown who takes his tally for the season to 3. Wood tempts Fulton a few overs later and he spoons a catch to Colly, and suddenly Kent are 188/3.

New man Trevor Ward makes 9 before Wood beats him for pace and bowls him. Willis and House put on 99 but then something amazing happens…a mini collapse. Kent go from 305/4 to 364/9 at the end of day one, which for an attack of our incompetence feels like a victory.

However, bowling has been our Achilles heel all season, so it is to the surprise of absolutely nobody that Dean Headley and Min Patel put on 104 for the final wicket. This is after the entire morning session of day two is washed out. I hate this game. 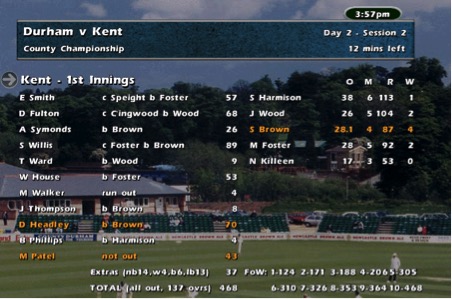 Because of the rain and the fact that it’s the North East, we take to the crease with 3 lights on the light meter and headlamps attached to the helmets of David Boon and Jon Lewis. It’s 4.15pm. I tell the lads to go canny, try and see out the day. Hopefully Headley will be tired after batting for longer than he has in his entire career.

You know what? They bloody listened! The 50 partnership is brought up with 16 overs left in the day. Then they bring on Patel, the slow left armer. With his third ball, Jon Lewis (his name is a shop) checks out with a lame forward defensive prod that is caught by one of many close fielders. Things soon get worse when Boon edges him behind and is dismissed too.

With Patel bowling like a demon, Andrew Symonds’ off spin is brought on at the other end. My prediction of it not being a pitch for spinners is already looking lame. We finish Day two on 85/2, 383 shy of Kent’s total. If we can just avoid the follow on, we might get out with a draw. Might.

The first hour of day three is lost to bad light. Some good news at last. However, when play resumes we’ve got to cope with Dean Headley bowling at 90mph in conditions that are still pretty gloomy. John Morris lasts just 5 balls into the day. He scored 11, so that average isn’t getting any better.

We only need 263 to make them bat again. Only. It’s that or bat for 4 sessions, whichever is less of a bother. 30 overs stand between us and a lie down, and really my aim is to get to the end of the day no more than two down and then we can go again tomorrow.

Boon and Lewis put on 54 until Boon is clean bowled, but that’s the only casualty of the final session of day three. We’re 85/1, trailing by 178. Is there a glimmer of hope?

A good night sleep can do wonders for you. John Morris presumably slept like the proverbial log as he’s smashed his average for the season and reached an unbeaten 47 by lunch. Jon Lewis also adds 76 and the partnership reaches 100. The deficit is just 98, but with two sessions to go, I’m still very wary of a collapse.

In the first over after lunch, Morris is out LBW to Dean Headley. Uh oh. Daley scratches around and scores four from 32 deliveries before losing his off stump. And then Jon Lewis falls for 95, bowled by Patel. That leaves us 38 behind with 6 wickets remaining.

After Collingwood is out stumped for 22, Speight and Foster offer some resistance and take us into the lead. At tea we are essentially a net 10/5, so nothing to get excited about.

Hope springs eternal when Speight makes 50. And then a rain shower comes to our aid and costs Kent an hour – although there was still time for Neil Killeen to get out. It’s almost like he’s running a campaign to be voted the worst inclusion ever.

Thanks to Speight, and a helping hand from the weather, we manage to bat out time for a draw. That’s 9 points from the match … which could be worse. We might be winless but we’re still not bottom. And isn’t that really all that matters? 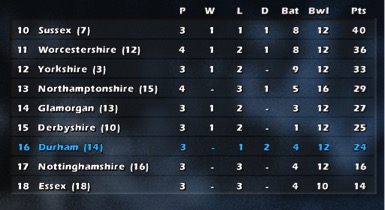 That’s it from me this week, but I’ll be back soon with a local derby. Bye for now!