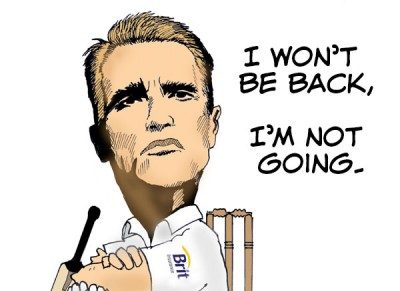 Here’s Jack Mendel with some interesting thoughts on Stuart Broad’s candidacy. Thanks go to our friends at The Diary of The 17th Man for the image above. We’ve resurrected it from a piece Jeremy Pooley wrote for us a while back.

Following the resignation of Alastair Cook, the possibility of Stuart Broad succeeding him has surfaced. This would inject a very Australian feeling into England.

Stuart Broad is hated by Australia so much that one wonders if they’re just a bit jealous.

The Aussies can dish out hard talk and aggressive cricket, and Broad can take it and give back the same.

They don’t like him because they see a bit of them in him.

Before even thinking about his performances, the single moment etched into the Old Enemy’s minds when it comes to Broad, will be an infamous incident at Trent Bridge in 2013.

Broad hit the ball to slip, but stood his ground as the Australians celebrated his wicket. He arrogantly watched the ball carry and just stood there as if nothing had happened.

In many ways, a new love-hate relationship was sparked.

Australians have always mocked the English. Indeed, the Ashes was born after a mock-obituary of English cricket was published in a British paper, The Sporting Times.

Mocking the English been the cornerstone of the relationship, and when the Aussies are losing, they target those who don’t fit that mould of polite bumbling ‘Englishness’.

In 2005, they used to target Kevin Pietersen, with his ridiculous hairstyle and supposed playboy lifestyle. And it spurred him on. When he smashed Glenn McGrath onto the Lord’s pavilion, he gained respect. When he saved the Oval Test with 158, he gained respect, with Shane Warne walking him off the pitch.

The Courier Mail refused to print his name.

When ‘The 27-year old medium pace bowler’ as he (Broad) was referred to, had a good tour taking 21 wickets, amidst a crisis for England, he won respect.

Broad won respect not only because he bowled well, but because he showed that he doesn’t get wound up by the opposition’s sledges or the press.

Indeed, during that 2013/14 series’, he even walked into press conferences with a copy of the Courier Mail to show that he could take the piss too.

Whether it’s Broad ability to get under the opposition’s skin by being unflappable, or his knack of bowling out Australia on his own, he has shown he can both take it and dish it out.

Now of course, if he were to become Test captain, a lot of things would need to be worked on.

He’d need to manage his own bowling workload, which is always difficult for a bowling captain.

He’d certainly need to rethink his use of reviews and the frequency of his appeals.

But in general, a Broad captaincy would be a breath of fresh air after five years of the robotic, grinding predictable Alastair Cook.

It would be a more Australian flavour of English captaincy.