Bodyline And The Harold Larwood Story

With the second Test bound to take centre stage later this week, I thought now would be an ideal time to take a trip down memory lane and remember an English cricketing hero from the past. Everyone knows the story of Bodyline, of course. But not everyone knows the broader history of Harold Larwood. And Stuart Broad thought he was badly treated! Here’s young writer Rahul Palaninathan’s account …

During this pandemic, I’ve gluttonously devoured mountains and mountains of variously genred books from Steve Jobs to Brett Lee. However, the books I am most interested in, perhaps unsurprisingly, are cricket autobiographies and biographies. While browsing for my next reading adventure to explore, a name grabbed the attention of my eye: Harold Larwood written by Duncan Hamilton.

Larwood, of course, was the main architect of destruction in the 1932 Ashes. He used his blinding speed to paralyze the Aussie batsmen and instil fear into their hearts. To achieve this tier of intimidation, Larwood carried out an ideology named, rather archaically, “leg theory” or Bodyline. This strategy cramped the batsman’s arc to play on the leg-side which resulted in a lollypop catch for close fielders. However, as simple as it may sound, leg theory demanded an unerring accuracy and searing pace. Harold Larwood certainly had both…

Most people only have a limited knowledge of Larwood and Bodyline. And whatever scraps of knowledge they have is blurred, vague, and results in a misconception. Bodyline was not, in fact, a tactic used to deliberately injure the batsmen or intimidate them. And Larwood was certainly not the devil incarnate.

On the other side, people often see the Australians as angelic, the epitome of sportsmanship, whose main protagonist was the immortal deity of Sir Donald George Bradman, a man who could do no wrong on the field or off it. The Australians were the innocent men who stood for justice as they valiantly fought off the unlawful British with their monstrous spearhead. Little do they know that this perception is woefully wrong…

As I discovered with upmost disbelief, one could actually argue that the ‘angelic’ Aussies were the real villains of Bodyline. They were physically and mentally bullied by Larwood’s prodigious pace and looked for excuses when they couldn’t cope. Meanwhile, common perceptions of Don Bradman, the messiah of Australian cricket, were also erroneous. The Don was portrayed by the media as an amiable and charming young man who, as a result of his rags to riches background, symbolised the Australian optimism that one day they too might achieve something great in this world.

However, this meticulously cultivated media image was nowhere near the appropriate representation of the authentic Don Bradman: he was a remote personality, even to his teammates, and tended to be quite egocentric and narrow-minded. Even his teammates were said to have “loathed” him because of his self-centred characteristics. These characteristics came to the fore when he was put under pressure by Larwood’s incredible prowess.

Put simply, The Don’s ego could not accept that he had been somewhat neutralised by Larwood. Although he still had a respectable average of 54 for the series (an average that an ordinary batsman would joyfully accept) he and the Australian team decided to accuse the English of cheating. No one dared to oppose the blemishless Bradman. On the other hand, the English team, Larwood and Jardine in particular, were crucified by the Australian public for abolishing the sacred spirit of the game and diminishing cricket permanently.

However, before you jump you to conclusions that the English deserved this foul treatment, you must understand where the Brits were coming from. If they wanted to win the Ashes, they had to find a consistent and reliable method of getting Don Bradman out. Otherwise the English fielders would’ve been reduced to mere spectators applauding Bradman as he demonstrated his efficiency with the bat.

Douglas Jardine, the English captain, understood this from the outset. He soon learned that Bradman was somewhat awkward when the ball jagged into his ribcage; therefore he devised a hypothesis to exploit his only weakness. After devising leg theory, Jardine needed a man with the suitable speed and skill to carry out the carnage. Harold Larwood was the man for the job as he had showcased his prowess with terrifying performances for Nottinghamshire.

Harold Larwood, as loyal as a dog, obeyed his captain’s order with dignity as he too realised that the only way of defeating the Australians was to expose Don’s weakness. We all know what happened next… 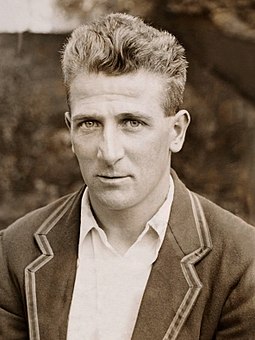 In the aftermath of the Bodyline series, Larwood’s public image soared to unimaginable heights as the whole of England celebrated his success. But Larwood, never one to bathe in glory or the limelight, was simply looking forward to playing more Test cricket. Sadly, however, this simple pleasure was slowly but surely taken from him…

Before the 1934 Ashes, the Australians wanted a guarantee that Bodyline would not recur. They threatened to boycott the series unless Harold Larwood published an unreserved apology for bowling leg theory. The MCC was aghast; the Ashes were such a vital component in their financial income and without it they would be in utter ruins. Hesitantly, therefore, they obliged with the Australian’s proposal. But predictably, and quite rightly, Larwood refused to say sorry.

Just imagine being in Larwood’s shoes. He was a proud man steeped in moral principles. He had a sound set of values. So why should he apologise for doing something that was within the laws of the game? Apologising would look like an admittance of guilt. His response to the audacious MCC request was therefore clear: he said his mother would die if she found out that her son had apologised.

Larwood’s treatment was even more bizarre because Jardine was still allowed to play. Why? Because he was an amateur and a well-respected figure in society. Larwood, however, was a professional. How times have changed…

After this fiasco, Larwood was banished to county cricket and never represented his country again. He enjoyed a few seasons of success on the county circuit, but immeasurable strains on his wailing body eventually proved too much. He was therefore unable to deliver the ball at the same velocities and retired at just 32 years of age. His first class statistics show just how good he was: 1427 wickets at an average of just 17.51. Extraordinary.

Post-retirement, Larwood desired a silent life devoid of any unnecessary controversy and unwanted attention. To achieve this goal, he bought an inconspicuous sweets shop in Blackpool that was blandly named Collins. Everything about the place was unspectacular and commonplace. There was nothing to suggest this humble shop was the livelihood of one of the quickest bowlers ever.

After a few years as a shop keeper, Larwood needed a change in scenery and so, on the recommendation of a friend, he migrated to Australia – the country that had hated him for so long ago. Luckily, however, the Aussies came to accept Larwood and gave him the peace he craved.

In my opinion, the real crime against Larwood was not the abuse he received during Bodyline. It was, in fact, the treatment he received by his own country after it. Larwood could have been the most outstanding fast bowler in cricket’s history. He had the speed, the stamina, the accuracy, the temperament and the dedication to his craft. He had the whole world at his feet. He could have been the bowling equivalent of Don Bradman.

But the MCC stopped this from happening. English cricket should have nurtured Larwood and provided him with the platform to maximise his potential. But instead they attempted to humiliate him by making him apologise for a crime he did not commit.

When he was performing at his customarily high level on the county circuit, Larwood was ignored and and eventually lost his love for the game. The MCC therefore destroyed the most lethal weapon they had at their disposal and blocked his path to sporting greatness.

Whether you’re English or Australian – and whether you agreed with Bodyline or not – surely we can all agree that one of the greatest injustices of the whole affair was the heartless ruination of this wonderful fast bowler’s career. No wonder so many England bowlers have complained that it’s a batsman’s game.