Today we welcome Leo McGuinn back to TFT. He looks at the Test careers of two genuinely world class fast bowlers …

A man was born in 1993 in Westmead, New South Wales, an outer suburb of Sydney. He was tipped for stardom from the very beginning. His test debut was only his fourth first-class match and at 18 years of age, became Australia’s youngest test cricketer since 1953. He lived up to his billing, taking 6/79 in the second innings and winning man of the match.

Injuries robbed five years of his test career but since his return in 2017, he has been consistently ranked the best bowler in the world. This man is of course Pat Cummins.

Another man was born in the same year, some 6,500 miles away in the sprawling metropolis of Ahmedabad. Raised by a single mother who worked as a schoolteacher to help fuel her sons’ ambition to play for his country.

He soon became known for his searing yorkers and unusual action. Domestic recognition paved the way for international honours, making his test debut, like Cummins, in South Africa. Only 24 at the time, he bowled like a man with many more years of experience. He cleaned up AB de Villiers for his maiden wicket. Not bad. He looked born to play the role of a bowling superstar. This man is Japrit Bumrah. 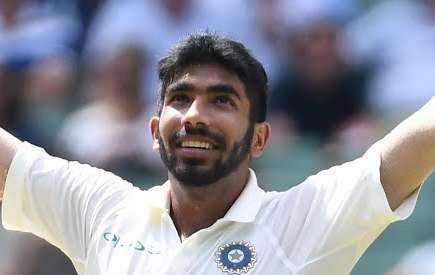 There are lots of differences between Bumrah and Cummins. The Australian towers over his peer at 6’4 compared to Bumrah’s modest 5’10. The much-fabled bowling action of Bumrah is of course totally unique, while Cummins’ more traditional action is just as effective, although different to the one he debuted with. The paceman spent years tinkering with his action to avoid a repeat of a recurring back injury that put a halt to his test career. They are much different batsman, Cummins being a handy lower-order bat and Bumrah being, well, a lower-order bat.

It’s the similarities between the two fast bowlers that are a lot more interesting. If their careers ae studied in detail, one could be forgiven for mistaking one for the other.

Their wicket taking records are remarkably similar. Cummins has played nearly double the number of tests, 34, and has taken 164 wickets. Compared to Bumrah and 83 wickets in 18 matches. This adds up to 4.82 wickets per match for Cummins and 4.61 for Bumrah.

Their strike rates match up also, Cummins taking a wicket every 47.1 balls and Bumrah 48.6. Their records are consistent everywhere they have played. Cummins home and away records are almost identical, highlighting his effectiveness on any pitch. Bumrah’s away record is, well, essentially his whole record. Remarkably the test defeat against England was his home debut. It makes it even more special that he averaged under 22 while not playing a single test at home.

That bring us onto the two men’s averages. Again very similar. Not just similar, but almost identical. Before the England game both men averaged exactly 21.59 in test cricket (Bumrah has gone up slightly to 21.89 now). Despite their differences the two premium quicks seem to be linked by their stats.

Their wicket taking records may be strikingly alike, but how they came about those wickets is strikingly different.

When it comes to the modes of dismissal, there is a stark contrast between the two men. The vast majority of Cummins wickets are out caught, either by keeper or fielders. In fact, he has only taken 8 wickets by method of LBW across his whole test career. 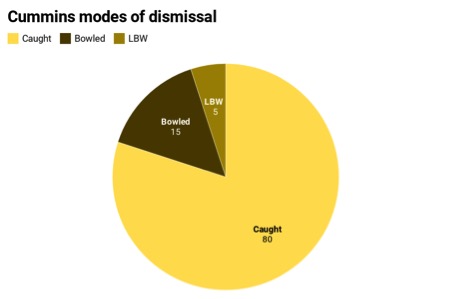 Bumrah is very different in this aspect. He has nearly triple the number of LBWs and a higher percentage bowled. 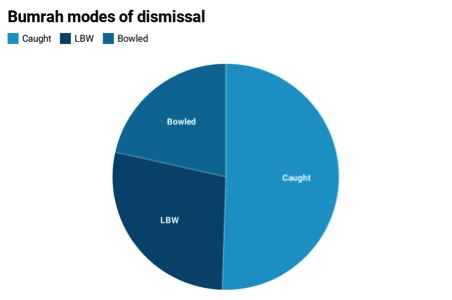 The Indian paceman clearly targets the stumps more and Cummins bowls a higher amount on a fourth or fifth stump line. Clearly there’s more than one way to be a highly successful test bowler.

Another difference between the men is Cummins incredible consistency. This is not to say Bumrah isn’t consistent but when it comes to bowling returns no-one comes close to the consistency of the Aussie.

Both bowlers have failed to take a wicket in only five of the innings they have bowled in but for Cummins it is out of 65 compared to Bumrah’s 36.

Cummins also has an incredible knack of just missing out on fifers. The big Aussie quick has 12 four wicket hauls compared to only 5 fifers. Bumrah already has 5 fifers and has taken four wickets without converting it into a fifer only once. In fact, despite being the top wicket taker in the 2019 Ashes, Cummins did not take five wickets in an innings once, despite taking at least three wickets in eight of England’s ten completed innings.

This is not a negative about Cummins, it just goes to highlight his incredible consistency. He very rarely, if ever, has an off day with the ball.

The two men have remarkable similarities and marked differences but at 27 years of age they should both be entering their prime as test match fast-bowlers.

Given their pace and skills, the two are well set to dominate opposition batsmen for years to come. Fast bowling is as healthy as ever and cricket is all the better for it. 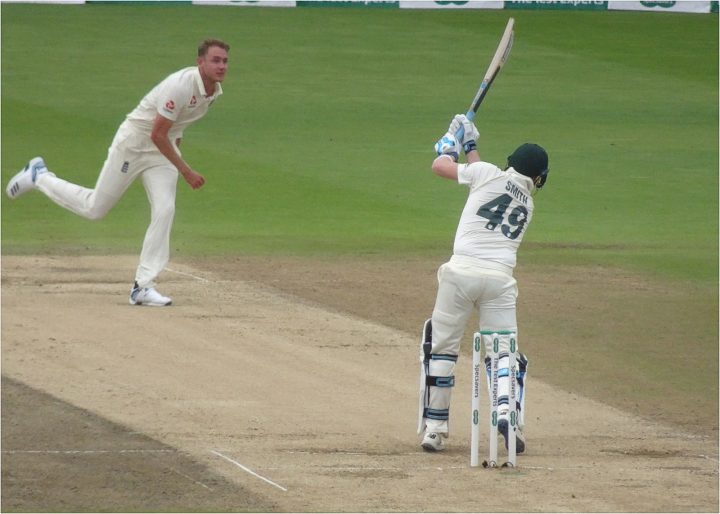