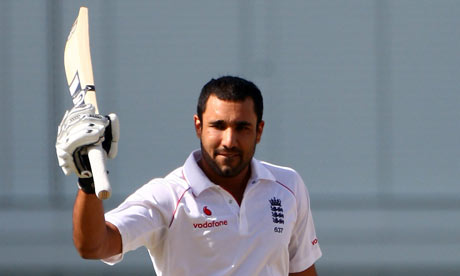 The worst kept secret in English cricket was revealed on Sunday. Ravi Bopara, a man that polarises opinion in the same way as a Ramprakash or Hick, was recalled to the test side in place of Jonny Bairstow. But in the words of Gary Barlow, a man with no relevance to cricket whatsoever, will Ravi be back for good?

This is a golden opportunity for Bopara to cement his place. He’s been in great form with the bat (and also with the ball) in recent weeks, and there are no real contenders for his spot breathing down his neck. Bairstow looked too wet behind the ears against the West Indies, a team Bopara has scored test centuries against, and there are no other viable options for the sixth batsman spot; England’s batting cupboard is as bare as our bowling cupboard is stacked.

Bopara has a great chance because he’ll be joining a supremely confident unit. Hick and Ramprakash never had that luxury – nor did they have such a professional backroom staff helping their cause. If Ravi can’t make a success of himself this time, I doubt he ever will.

So how will he fare? Personally I find it difficult to tell. His supporters will claim that he played beautifully against Australia in the ODIs and he looks mentally stronger. His detractors will claim that there is still a vulnerability to his batting – sometimes he has that Amir Khan ‘please don’t hit me’ look – and that test cricket against a potent South Africa attack is a completely proposition than ODIs against a pedestrian Australian outfit. Both camps have a point.

All we can do is keep our fingers crossed for the lad. He’s obviously got talent – not as much as the aforementioned Hick and Ramprakash – but then again Steyn and Morkel are not as good as Donald and Pollock. His bowling will also be extremely useful to England’s cause.

Bopara’s bowling is a little bit quicker than it looks, and I personally believe he is well worth six to ten overs a day. That’s just enough to reduce the workload on Anderson and Broad. It might also enable England to get the best out of Steven Finn, if he ever gets a chance.

As we saw in the ODI series, Finn is a real handful in short spells, but struggles when asked to increase his workload to twenty plus overs a day. Bopara is no Simon Jones (obviously) but he has more potential than anyone else to balance the England test side.

Then again, this debate is probably a tad academic. If Bresnan is fit, the reliable Yorkie will surely play. Much to the South Africans delight I’m sure.