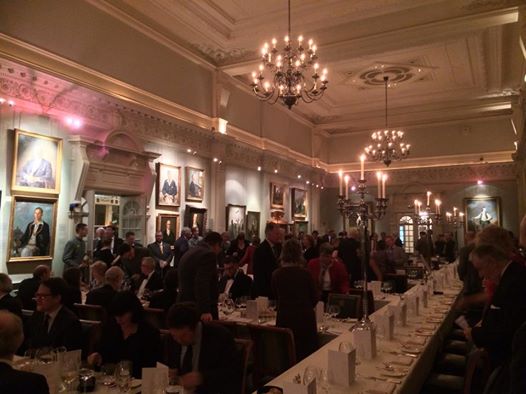 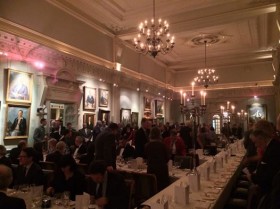 One half of the TFT enjoyed a rather special evening on Wednesday. It’s the kind of thing that only comes along once in a lifetime …

Yours truly had the privilege of attending the MCC’s bicentennial dinner in the Long Room at Lord’s. That’s right folks, they let me, a common pleb and card carrying member of the great unwashed, dine within the most sacred room in world cricket. I spent the entire evening pinching myself.

How did I wriggle my way into such a glamorous event? I could say I was invited for my services to cricket writing, but you wouldn’t believe me. The truth is that my industrious wife, who works at the National Theatre, is proving quite resourceful.

I think a public ballot was involved somewhere, but judging by the composition of the other guests – nobody under the age of 35, predominantly male and well educated – I doubt it was all decided by chance. Maybe the fact my application read ‘Dr James Morgan’ (I have a PhD) swayed things in my favour. I really don’t know.

Anyway, here are the juicy bits from the evening.

We turned up at 7pm at the Grace Gate. We approached the pavilion steps tentatively, but rather than being turned away (which is what usually happens when I try to blag my way into the pavilion during test matches) everyone was rather welcoming. It must have been my jacket and silly tie.

It wasn’t long before we’d been ushered into the bar, which sits immediately behind the Long Room. A pint of beer was thrust into my hand. Wow, I’m drinking here. Really? It sure beats Wetherspoons.

Before dinner we were invited on a guided tour of the museum and pavilion. Like many of the guests, I done the former before, but it’s always nice to see The Ashes in their permanent home. Having said that, it’s sad that I’ve got a lot closer to the urn this winter than Alastair Cook.

Wandering round the pavilion was literally a dream come true. We were even allowed into the home dressing room; I took the opportunity to sit on the famous players’ balcony and study the honours boards.

I imagined what it would be like on the Saturday of a test match. Would the players be moaning about the umpires, watching Sky’s coverage, playing cards or checking the latest racing results? Would they even be aware of the 25,000 spectators outside? Maybe this place is like a cocoon. Or maybe it’s a pressure cooker where nerves are frayed and weak men break.

When we filed into the dressing rooms we were told to take a seat. I sat down in a single armchair near the balcony. The other guests sat on the benches underneath the players’ pegs. The guide immediately told me I was sitting in Ian Bell’s seat. I liked the sound of that. A supernatural force had somehow guided me in the direction of England’s most stylish batsman.

After telling us where players past and present used to sit, I moved to Andrew Strauss’ old position; he occupied the armchair opposite Bell’s. My mind visualised all the great team talks uttered from this very place. I wonder what the skipper said to Freddie when he bowled Australia out in 2009? Where did Brearley stand when he fired up Beefy? It’s amazing how many times Botham’s name was on the honours boards.

What surprised me is the dressing rooms are actually quite basic (in a 1960s kind of way). There are no showers or toilets – players have to walk down a corridor to get there – and the England team don’t even have their own lockers. There are lockers inside the room, of course, but they’re reserved for Middlesex players. In fact, the dressing rooms are very plain compared to the rest of the pavilion, which is obviously elegant and steeped in history: shiny wooden floors and panelled walls are the norm.

Not that it matters though. For me the England dressing room was the most sacred and magical place. I shoved a business card down the side of Strauss’ armchair. Nobody will find it for years. The thought of my business card eavesdropping on future conversations between great cricketers will keep me warm at night.

The dinner itself was superb – as you might expect. Smoked salmon stuffed with crayfish, beef fillet, chocolate mousse, and enough fine wine to sink a battleship. The Long Room itself, as you can see from my picture above, was incredibly beautiful. It was historic refinement personified.

After the meal there was a question and answer session with Mike Gatting and Charlotte Edwards. It was great to see these two fine cricketers up close and personal, but some of the answers they provided were (perhaps predictably) the most disappointing aspect of the evening. You could tell they didn’t want to rock the boat, particularly Charlotte Edwards, whose media training and debt to the ECB for making women cricketers professional was a tad obvious. Well, you can hardly blame her.

After Gatt straight-batted my question about a two-division test championship (he said it would never happen now they’ve agreed a new future tours programme) the inevitable questions about Kevin Pietersen came up. Gatt was an entertaining host, so I don’t want to criticise him too much, but his answers were about as convincing as Goochie’s hair-hat:

He tried to compare the KP farce with Alex Ferguson’s decision to release David Beckham and Roy Keane. I didn’t have the heart to tell him that Man Utd were (a) winning at the time, and (b) the England cricket team doesn’t have the ability to splash the cash on big name replacement.

Usually when Gatt and Charlotte answered a question, spontaneous applause erupted throughout the room. On this occasion there was a mere ripple, if that. Talk about awkward. Fortunately however, the mood lifted when the nice couple next to us asked Charlotte: “Would our men have won the Ashes if they’d played like a bunch of girls”.

Overall it was an exquisite evening. The only other awkward moment came was when I realised I was the only person who had removed his jacket at dinnertime. The penny dropped when I was halfway through my desert. Oooops.

So don’t worry folks. I might have attended a stuffy occasion at Lord’s but we’re all still rebels here at TFT. In fact, bearing my forearms in the Long Room is just the latest way I’ve found to stick two fingers up at authority. Take that you MCC stick-in-the-muds. Vive la revolution!