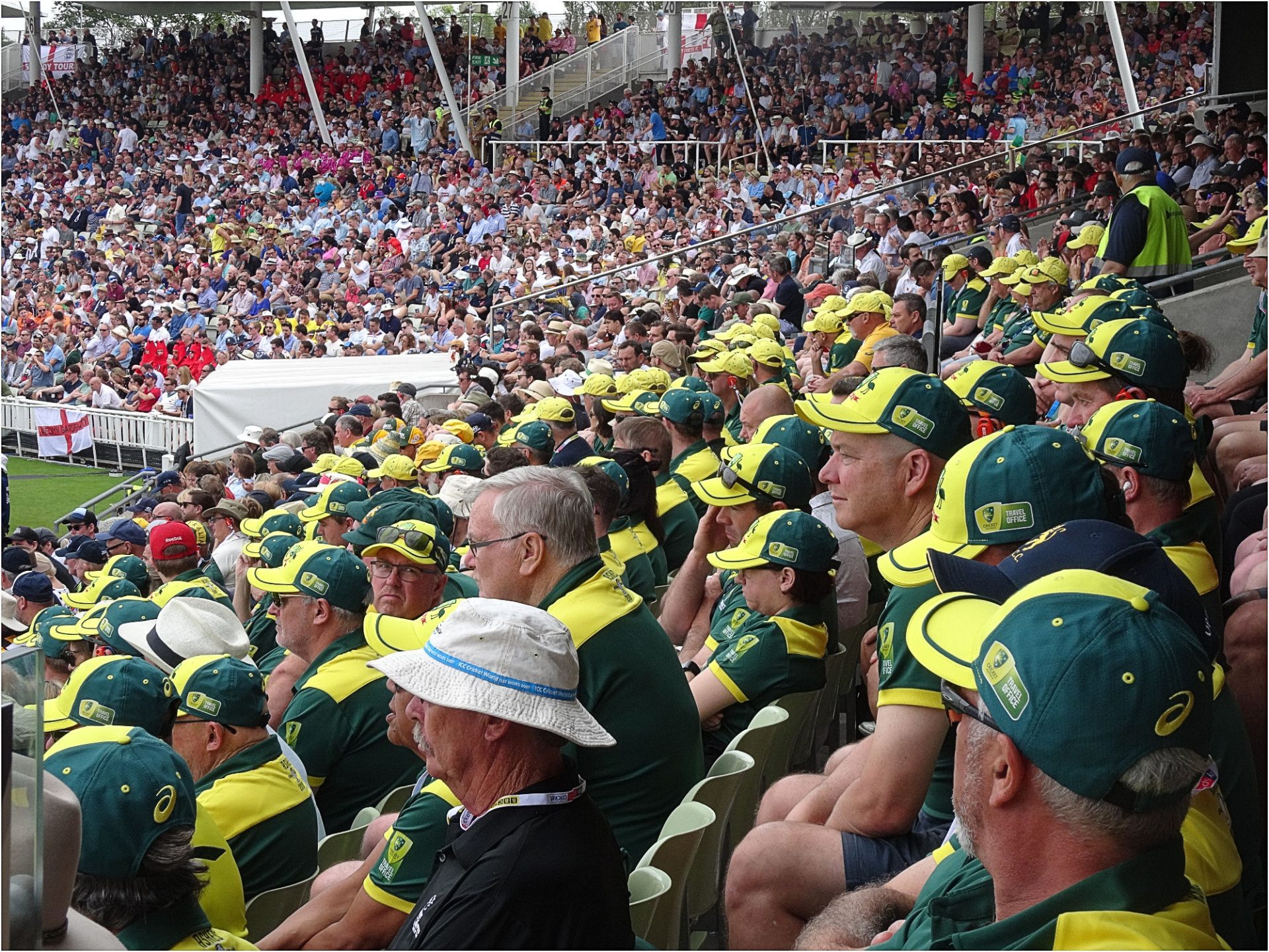 For all its unbridled beauty cricket has always been susceptible to changes in the weather. The first hint of rain would have groundsmen scrambling to cover the wicket. In a bygone era something called bad light might also stop play. Although frustrating for the players it meant fans could adjourn to the bar that much earlier. This unpredictability would often reduce the length of games but inadvertently laid the basic foundation of the one day game.

Whilst an intemperate climate might have assisted the theory, it was an increasingly fragile purse that sparked reality. By the 1950s the game was in the pit of a financial crisis. The traditional four day county game was no longer paying its way. Something had to be done and the MCC acted with bureaucratic efficiency; they formed a sub-committee at the end of the 1956 season. A number of options were considered including changes to the championship format and laws of the game. A report was delivered in January 1957 with recommendations that were duly implemented. Strangely, the suggestion that a one day format be established was quietly ignored.

With hindsight, the lack of action condemned the sport to further uncertainty. It wasn’t until 1961 that MCC relented and rubber stamped the creation of a one day competition. Analogies with pulling teeth were apt as Edward Griffiths noted in his excellent one day history Glory Days; it was ‘perhaps the longest discussion in sports history’. However, the principle had been accepted albeit grudgingly and the new competition sponsored by Gillette would begin in 1963.

The world’s first official one day game took place at Old Trafford on 1st May 1963. With seventeen first class counties the knock-out format demanded a preliminary round.  It was Lancashire and Leicestershire that drew the short straw with 65 overs a side. Brian Booth and Robert Entwhistle opened the innings for Lancashire, while Charles Spencer of Leicestershire would bowl the first over of the one day era.

A healthy attendance was in contrast to the two old men and a dog that usually watched a county game. The home side scored a hefty 304-9 and starred an excellent 121 from Peter Marner. Leicestershire struggled in reply as Harold ’Dickie’ Bird was bowled for 7 before Manchester’s climate took control. In a delicious slice of irony play was rained off and the match entered a second day. Lancashire eventually won the game by a comfortable margin of 101 runs. Fans had seen 507 runs scored in 118 overs and two individual centuries. It might have been an hors d’oeuvre to the main course but must have been satisfying.

The show was finally on the road and provided the game with a vital new revenue stream. Sussex won the inaugural competition which produced four different winners in its first six years.  The Gillette Cup went from strength to strength and became a blueprint for the limited overs format. It was undoubtedly a twist of fate that an American razor company sponsored the most English of games. With an evangelical sense of purpose Gillette went onto sponsor similar competitions in South Africa, Australia, the West Indies and New Zealand. By 1969, the John Player League had been added to the calendar with a Sunday afternoon 40 over format. But what about one day international cricket; would the behemoths of the Long Room permit such vulgarity?

That very same year Ben Brocklehurst, chairman of the Cricketer magazine had a flash of inspiration. A cricket World Cup involving the seven recognised test nations was a mouth-watering prospect.  England’s success in the 1966 World Cup was still fresh in the mind, and a compelling template for an equivalent competition. However, Brocklehurst was stymied by a maze of Lords sub-committees and the recently established Test & County Cricket Board. Looking back it was difficult to see exactly what their problem was. Brocklehurst had secured third party sponsorship worth £50,000 (a considerable sum in the late 60s) and offered the opportunity to promote cricket on a world stage.

Brocklehurst was in Australia for the 1970/71 Ashes series and curiously present for the first one day international. It was purely accidental and driven by prevailing weather conditions. The third test at Melbourne had been washed out; three days of torrential rain had led to abandonment and a rescheduled for late January. Sir Donald Bradman, then a member of the Australian Board of Control asked what might be done on the last day of the aborted test. He noted the weather forecast was favourable and felt something might be salvaged from the vacant Tuesday slot.

The Don suggested a one day match between Australia and England. With baffling self-importance MCC officials asked for time to consider his proposal. Sir Cyril Hawker and Gubby Allen returned from their deliberations and consented to Bradman’s proposal. However, further meetings were required to agree both competing teams could be called Australia and England. With white smoke emanating from the conclave a momentous decision had been made.

The first official one day international took place at the Melbourne Cricket Ground on 5th January 1971. The match consisted of 40 eight ball overs per side with a maximum of 8 overs allotted to each bowler. A bumper crowd of 46,000 attended the MCG as respective captains Bill Lawry and Ray Illingworth met at the wicket. The former won the toss and put England into bat. The rain of the previous five days had considerably slowed the outfield. England scored only 7 boundaries in a total of 190-9 after 39.4 overs. John Edrich top scored with 82 but slowly ran out of partners. Ray Illingworth and Colin Cowdrey were dismissed for singles while Ashley Mallett returned the best bowling figures of 3 for 34. Australia rattled off the target of 191 with 5 wickets and 5 overs to spare. Ian Chappell and Doug Walters shared the key partnership with a stand of 66. Ray Illingworth atoned for his failure with the bat by taking 3 for 50.

England bounced back in emphatic style as they regained the Ashes with a 2-0 series win. But the ODI was up and running eight years after the domestic equivalent started. The first ODI series was organised in August 1972 when England defeated Australia 2-1. As for Ben Brocklehurst and his grand plan, a tortuous game of snakes and ladders ensued with the Lords sub-committee. However, his vision never quite came to fruition.  The World Cup that was established in 1975 bore striking similarities to the Brocklehurst plan. At the very least he was the architect but never really gained the credit that was due. Brocklehurst later admitted he was naïve to think an outsider could influence those who ran the game in the 60s and 70s. As Mark Baldwin observed in the History of the Cricket World Cup, ‘the establishment of the day…was suspicious of anyone attempting to muscle in…on a relatively small and cosy little world’.

The Benson & Hedges Cup was introduced for the 1972 season and a third competition was added to the domestic one day itinerary. Ironically, its demise was due to a new format devised by the ECB in 2003. In an attempt to attract a younger audience T20 was introduced for the first time. Twenty overs a side would reduce playing time to around three hours and ergo a much better fit for TV schedules.

A further dumbing down did nothing for the sport’s integrity and buried any sense of tactical awareness. It was a slugfest that saved its attention for the batsmen. The invention of death bowlers to heighten the tension was really missing the point. T20 games are, by and large won and lost by the batsmen. Even so the format was wildly successful and quickly spawned further competitions. The Indian Premier League was followed by equivalent T20 leagues in Australia, the West Indies, Bangladesh, Pakistan and Afghanistan. T20 internationals were soon tagged on with a bi-annual T20 World Cup thrown in for good measure.

With the commercial success of T20 it must be wondered why it was thought necessary to introduce a fourth version of the game. But the Hundred became a reality featuring a regional franchise based system. The zealots can say what they like, but 100 balls each are effectively 16 overs per side whatever they decide to call them. The rules have carried the game further away from its origins than many would care to admit.  TV coverage is too invasive with screens crammed full of stats; to such an extent it feels more like a game on PlayStation.

Moreover, the Beeb’s coverage is incredibly patronising and comes across like an edition of Play School when presenters explain the rules…it’s like cricket…only shorter. Well frankly it isn’t even close to cricket. It remains to be seen whether the Hundred provides the sport with fresh impetus. I may well have been a naysayer when the Gillette Cup started in 1963 and look what happened there. If only Sir Cyril Hawker and Gubby Allen had been around today; they would have formed a sub-committee and spent five years talking about it?