A Good Night In Karachi

Think back – if you dare – to the bleak atmosphere that descends in classic horror films. The landscapes of the wild moors in An American Warewolf in London. The eerie torchlit scenes of Halloween as Michael Myers stalks a youthful Jamie Lee Curtis.

Keep these scenes in mind – scenes of the the unforgiving night, where only the hardiest of souls are forced to brave the elements.

Now cast your cricketing mind back to the darkest of December nights in the year 2000. It is the scene of one of the most famous English test match victories. Picture if you will a test match being played out in almost pitch black, in the city of Karachi.

By the end of the fifth night there was confusion as to where the ball was, who was batting, and indeed whether there was actually a game of cricket being played at all.

Was this all a strange nightmare? It certainly was for Moin Khan – the erstwhile captain of a thoroughly decent Pakistan team.

For this monumental result we have in large part to thank Steve Bucknor, whose steadfast and bloody-minded umpiring meant he refused to allow any delaying tactics from the Pakistan captain to change the course of the game.

There was time wasting aplenty. An ‘injury’ to a bowler, a few sets of replacement keeper gloves, and lest we forget the endless parade of drinks being casually brought out with the same urgency as if nonchalantly serving amuse-bouche at the international relaxing contest.

Then of course came the microscopic changes to fielding positions after every other delivery. Moin called for the 12th man to bring his set square and by now Bucknor was losing his patience. The complete bag of tricks was being performed by Moin as night time cast its long shroud upon the National Stadium. Bucknor would exact his cold, hard revenge. He would continue to umpire until nobody could see a bloody thing.

Moin’s Pakistan side was of a very sound cricketing ability. They had a fine mix of youth and experience.  Inzamam ul-haq had scored a typically graceful century in the first innings, Waqar was in the wickets and Mohammed Yousef scored heavily. As time wore on it looked for all the world that a third inevitable draw was on the cards.

England were certainly dogged and determined in this three match series. These traits were beginning to be instilled by Nasser Hussain’s brilliant captaincy. He was beginning to mould a team in his image through his tenacity and determination. There was an insistence that England would fight for every run.

Hussain would oversee a foundation of stability that led to some of the better England cricket teams in quite a while. A battling Atherton hundred, and the utterly astonishing sight of a wicket for Marcus Trescothick bowling his very medium pace meant that England were still in the hunt towards the end of the fourth day of this final test match. 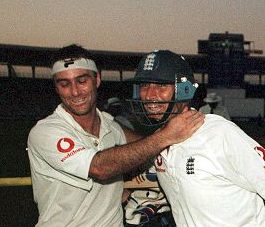 During the Pakistan 2nd innings on Day 5 England seemed to sniff the very faintest scent of blood. After a series of bewildering dismissals to some very gifted and in form batsmen (at the end of day 4) the middle and lower order of Pakistan were eventually taken out. Surely there wasn’t enough time or light to complete an improbable chase on the final afternoon?

Daylight was becoming twilight as Atherton and Trescothick headed to the crease with England needing 176 to win. I have since looked up the strike rate for England’s batsmen, and Atherton’s was an astonishing 78.78 – so this was England playing at a rapid pace. The openers departed as did Alec Stewart, and I dared to think we may even lose.

Thoughts of defeat were swept away in the gloom as Thorpe and Hick were proactive. They pieced together a partnership to win the match. Thorpe played a typically belligerent innings, with great style and composure. Hick was castled late in the day, or perhaps that should be early in the night. Hussain sprinted to the crease and rotated strike…I think it was Hussain…anyway it was a man in cricket whites, possibly holding a bat.

Moin complained – a lot. Bucknor refused to be swayed. A Chinese cut was chiselled down past someone by Thorpe, and the poor fielder stretched his arms out to say ‘I cant see anything’ – although he was facing the wrong direction so his protestations were in vain.

The outline of Nasser Hussain and the shadow of Graeme Thorpe just about remained in sight as they realised a win had been eaked out despite the utter ludicrousness of the situation.

David Gower’s dry commentary summed things up nicely as the England squad huddled in great celebrations. He said, ‘to be fair many of the people in the ground will be unable to say they saw it – but England have won.’