Yesterday witnessed the first ever TFT live blog. Thanks to Cam and Leo for their entertaining coverage of the game. Here’s Luke Wolstenholme, another new contributor, with his match report. England won by 5-wickets with that man Jonny Bairstow making 86 not out.

Even if T20 is not your format of choice, we can all agree that it was great to have England back on our screens after a few months without international cricket. They brought out the big guns, and the game sure didn’t disappoint.

England chose to bowl first at the picturesque Newlands ground, with Table Mountain shimmering in the backdrop. The average first innings total is 158, so South Africa were aiming to get around 170 on the board to be competitive.

They got off to a tricky start, losing Temba Bavuma in the first over after a shocking bit of a judgement from the diminutive stroke maker. The pitch was on the slower side, but Jofra Archer still managed to hurry both Faf du Plessis and Quinton de Kock in his first over.

South Africa were plodding along through the first few overs, until de Kock decided enough was enough, smashing Archer into the stands over square-leg. Later in the same over he effortlessly whipped Archer through mid-wicket for four, seemingly carrying on his good form from second half of the IPL.

In contrast, Faf was struggling to get going on 4 off 10, but then went bezerk from his 11th ball. Poor Tom Curran was the recipient of the some rough treatment from the former South African skipper, who carved him to all parts of the ground, taking 24 of his over. This was Curran’s most expensive over in T20 cricket.

The two senior players in the South African side had done their job well, setting a solid foundation of 57-1 by the end of the powerplay. De Kock celebrated this wonderful start by almost wiping out his teammate with a blistering drive through mid-on from Sam Curran, with du Plessis hitting the deck at the last minute to avoid a ball to the chest.

The pair continued on their merry way, putting on the highest 2nd wicket partnership for South Africa against in England in T20 Internationals. Shortly after, de Kock decided to throw his wicket away, chipping to Morgan at cover. Nonetheless, the Proteas would have been pleased to be 86-2 at the halfway stage, with 180+ on the cards.

Faf brought up his 50 off just 33 balls before holing out off Sam Curran. It was up to Rassie van der Dussen and Heinrich Klaasen to rebuild the innings before a final assault. England had fought back really well to have South Africa 139-3 with four overs remaining.

Yet, with wickets in the shed, Klaasen decided to free his arms, delivering some powerful blows against the toiling English quicks. After he departed, the onus was on van der Dussen to finish the innings well, but he decided to instead hit a juicy Archer full-toss straight down fine-legs throat.

Debutant George Linde made sure the innings still finished on a positive note, creaming a four and a six, propelling the Proteas to a competitive 179-6.

England had a very strong line-up; so strong in fact that Jonny Bairstow, one of the best white-ball openers in the world, was demoted to number 4. Ben Stokes also returned to the side at number 5.

England got off to the worst possible start, losing Jason Roy second ball of the innings to debutant Linde’s gentle left-armers. Much like his counterpart Bavuma, Roy opted for a poor shot selection early doors and seems to have a recurring issue against spin first-up in an innings.

Kasigo Rabada, spearhead of the Proteas attack, started off fiercely, rushing Malan and going for just 2 off his first over. The explosive England batting line up was well-contained.

Dawid Malan got into his flow on his 10th ball, with a beautifully timed flick through mid-wicket off Beuran Hendricks. Malan has come under some criticism for slow starts, but it’s hard to justify that criticism when he’s the number 1 ranked T20 batsman right now. He then went on to play a wonderful cross-batted cut through the covers for 4 off Rabada, followed by a full-blooded cover drive, showing just why he’s deserving of the top spot.

At the other end, Buttler was ticking along without any of the usual destructive shots we’ve become so accustomed to. He then threw his wicket-away against Lundi Ngidi, before Malan played an ill-timed sweep straight into the hands of Rabada at square-leg.

England were now in a precarious position at 34-3 at the end of the powerplay. There was no need to panic just yet, but there was a lot to be done. The two ginger dynamos had reunited at the crease, hoping to imitate their last partnership in Cape Town back in January 2016.

Jonny Bairstow looked in particularly good touch from the off. He took a liking to Tabraiz Shamsi’s left-arm chinaman, bludgeoning back-to-back sixes over long-on and mid-wicket, the first of the two being nothing short of disrespectful. He was then uncharacteristically dropped by du Plessis at long-on, which proved to be the pivotal moment in the game.

Ben Stokes joined the party with a brutal slog-sweep into the stands off Linde. At the halfway stage, England were 75-3, with the partnership over 50. The game was firmly in the balance at this stage, but Bairstow continued to race on. A particular highlight was his guided shot over backward point for a one bounce 4 – balancing strength and guile throughout his innings.

Just as England fans were starting to relax a bit, Stokes was caught for 37. Captain Eoin Morgan joined Bairstow for the final 5 overs of the game, still with a lot to be done.

And that’s when Hendricks decided to gift England a 28-run over. He bowled three wides and some further slot balls, and was rightly dispatched all over the ground. England were now in the driving seat. Morgan never really got going, but it didn’t matter because Bairstow was playing one of the innings of his life.

Sure, it was a bit tense at the end, but when Sam Curran decided to hit a six over long-on, the game was put to bed. Bairstow finished the game in real style, hitting a four and then a monstrous six into the construction site to end it, seeing England home with 4 balls to spare. A memorable victory. 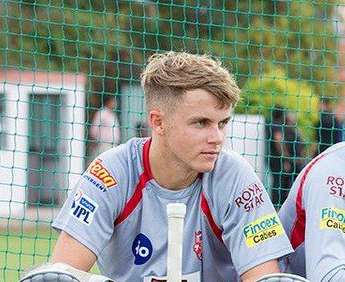 A Tale of Two Currans…

Just a few months ago, Tom Curran was much higher up in the white-ball pecking order than his younger brother. However, after a superb IPL, Sam is now one of the first names on the team sheet and Tom is a surprise starter.

It’s incredible how their fortunes have changed in such a short timeframe. Sam was the pick of the England bowlers, ending up with 3-28 off his 4 overs. He also hit a decisive 6 in the penultimate over to calm any nerves.

In contrast, Tom had a tough day at the office, finishing with figures of 1-55. He was quite simply taken apart by du Plessis. When Mark Wood is back, one wonders if Tom will be able to retain his place in the side.

A debut to remember…

George Linde debuted for the Proteas at the prime age of 28. And what a debut it was! He first smoked two boundaries in the final over to push South Africa towards 180. Then, he removed Roy with his second-ball in international cricket. He followed this up by getting rid of the number 1 ranked t20 batsman in Malan, finishing with figures of 2-20. To cap off a superb solo performance, he caught Stokes at mid-on during a critical part of the game. A performance deserving of a victory. What a start to his international career.

What to do with England’s batting order?

Yes, Bairstow thrived in his new position at 4 and England won the game today. But questions still remain over England’s strongest batting line-up. Is Buttler better suited to opening or finishing the innings? Is Morgan wasted down at 6? What happens if Malan’s form falters slightly? Why would England not keep their proven opening partnership of Bairstow and Roy? These are questions that England’s management need to ponder ahead of the next 2 games. There aren’t too many more opportunities to play around with the side before the T20 World Cup next year. If this is the line-up they’re set on then that’s great, but there are other combinations that could be truly devastating.

A weak South African side…

Let’s be honest here, this South African side is poor. With no David Miller in the middle-order, their batting looked light and they rely far too much on their captain and du Plessis to score runs. Without Anrich Nortje, their bowling also looked limited. When he returns, a pace trio of him, Rabada and Ngidi will test most sides in world cricket. Expectations will be fairly low for the T20 World Cup next year, but they played well today and here’s hoping they perform in the remaining two matches of the series.